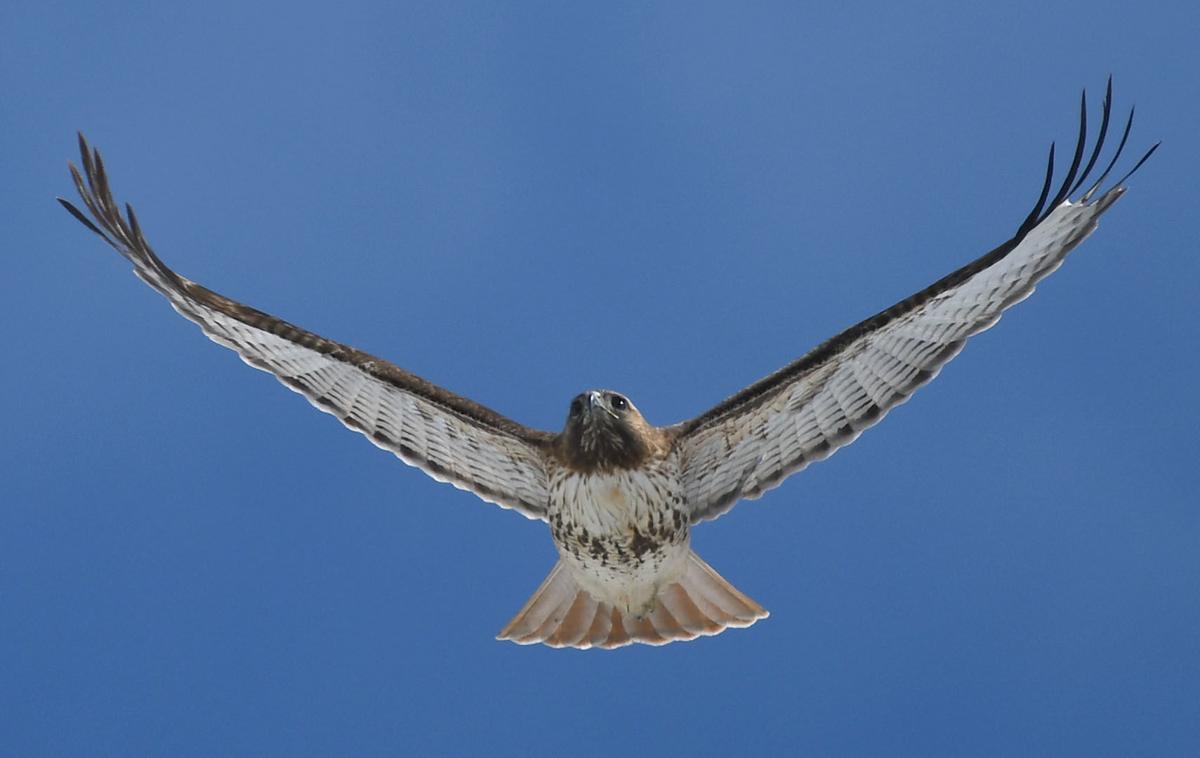 First of year sighting for Wes and Shirley Timmerman of a red-tailed hawk as it circled above their yard, not far from where a pair has nested in years past. 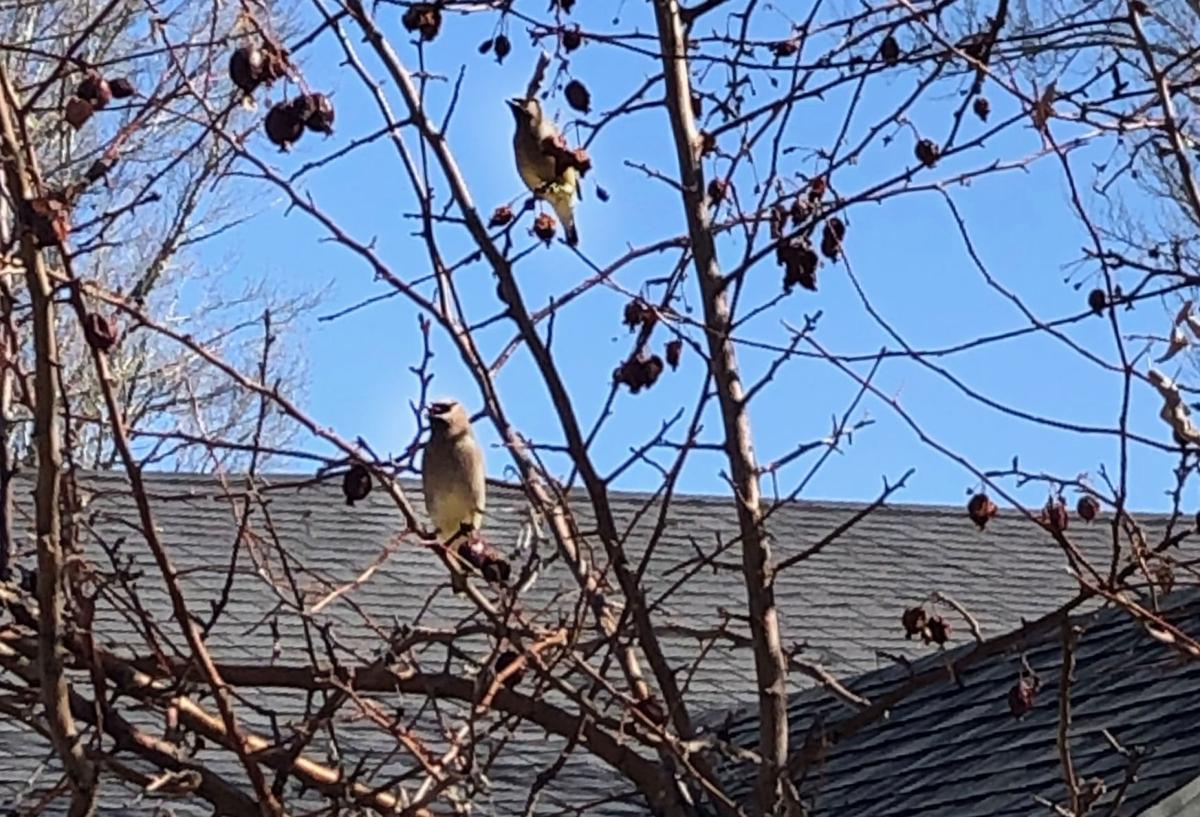 First of year sighting for Wes and Shirley Timmerman of a red-tailed hawk as it circled above their yard, not far from where a pair has nested in years past.

This past week Wes and Shirley Timmerman have seen many robins, a few chickadees, a white-breasted and a red-breasted nuthatch, house sparrows, cedar waxwings, great horned owls, ravens and bald eagles (of an assortment of ages). Also, a FOY red-tailed hawk on March 26 plus four more on March 28, all in South Park.

Eric Cole, biologist for the National Elk Refuge, reports that the last day of supplemental feeding this season was Monday, March 29, which is four days earlier than the average feeding end date of April 2. On the refuge signs of spring include: March 4, multiple red-winged blackbirds along Flat Creek; March 5 a single horned lark northwest of Miller Butte; March 10, a red-tailed hawk at McBride; March 12, a mountain bluebird in the McBride area; March 15, a western meadowlark northwest of Miller Butte; and March 19, two redheads in the Nowlin area.

On Thursday, Bernie McHugh reported, about noon from Mormon Row, he had a very good look at a Swainson’s hawk flying “like a bat out of hell.” This was not, McHugh repeated, not an April Fool’s joke. Also found were four snow buntings and an even dozen moose — five at the southwest corner of Gros Ventre Junction, three at the Gros Ventre river pullout and four more on Antelope Flats in Kelly. In Wilson, he still has eight pine grosbeaks showing up at the house, even though they have stopped feeding. And he found a male belted kingfisher on Fish Creek on March 31.

Ryan Dorgan spotted another Uinta ground squirrel on April 1 popping up from beneath the Kelly junction cattle guard.

Joe Bohne has an eastern blue jay hanging around his place in Alpine. Interesting.

Flash! Friday afternoon: Spotted from Fish Creek bridge in Wilson by Diane and Keith Benefiel, one sandhill crane and a pair of hooded mergansers.

McHugh saw about 25 sandhill cranes in Skyline fields Saturday afternoon. Sandhill cranes have also been seen in several other locations around the area. (Susan Marsh and Earle Layser.)

Joan Lucas reports the first orogenia of the season (in her yard) on Thursday, April 1, 10 days earlier than she saw them last year.

Ron, Jen and Kai Gessler report both of the Hoback ospreys have returned. There goes the peace and quiet. But it sure beats the heck out of the traffic noise. Their feeder is still up; they monitor it closely. If they see any sick birds it’s immediately pulled in; fortunately none so far. They have a variety of juncos, evening grosbeaks, blackbirds, house finches, nuthatches and possibly their green-tailed towhee. They hear lots of crows and a flicker in Hoback and the blue jays are back. A couple of weeks back they noticed two bighorn rams high above Henry’s Road. If you venture that way observe the posted speed limit. There are also lots of elk and deer along the roadway, not to mention kids. Be like Bert.

Katherine Gura heard her first meadowlark of the year this week, so spring is in the air. However, she also saw a snowshoe hare (rare for her), and it was still in its snow-white winter “plumage.” Winter cannot be far behind.

John Hebberger Jr. reports that around his house, in town, there are lots of red-breasted nuthatches, lots of juncos, both kinds of chickadees, occasional flickers and Clark’s nutcrackers. A few siskins and house finches. And of course lots of robins. Up at the Oxbow, he found 15 or more trumpeter swans and nearly as many Canada geese; a dozen redhead ducks; and a bit on the rarer side, a very dark, nearly black and clearly radio-collared wolf on the hillside above the Oxbow — it was lying in the snow and occasionally howling. The wolf was a good 350 yards away, perhaps more.

Kay Modi has seen and heard a belted kingfisher along Flat Creek for the past several weeks. While walking on the Elk Refuge on Wednesday she and Frances Clark counted 16 trumpeter swans.

Loy Kiefling reports that tree swallows just showed up; they are checking out the nesting box. Numerous robins on Kiefling’s raisin tray.

This past Friday Mark Huffman saw about a dozen painted lady butterflies up High School Butte. The next day he saw more along Cache Creek, along with a couple of mourning cloaks.

Saturday, a Compton tortoiseshell butterfly was fluttering around the Nelson Drive trailhead. Frances Clark noticed its open wings of rust-orange and brown-black with a touch of white on them. When the ragged-edged wings fold up the 2- or 3-inch adults are cryptic grays. Adults over-winter and, after mating, lay their eggs on aspens, cottonwoods or willows — one brood a year. Susan Marsh, Julie Holding, Meg Gilbert, and Clark spotted a number of spring parsleys and one phlox flower on the dry slopes in the same area. More to emerge

The orphan male moose wanders Wilson, visiting familiar locales from the fall, including the elementary school, front yards and bike path, looking for fresh green. Hard without mom. A reminder to drive carefully all. Dipper and kingfisher frequent Fish Creek by the Wilson bridge, and two song sparrows were staking out territory with their high-pitched trills in the patch of wetlands behind Hungry Jack’s.

But it’s just April. By midafternoon a bank of clouds obscures the sun, and it’s suddenly cold. No doubt about it: Cold.