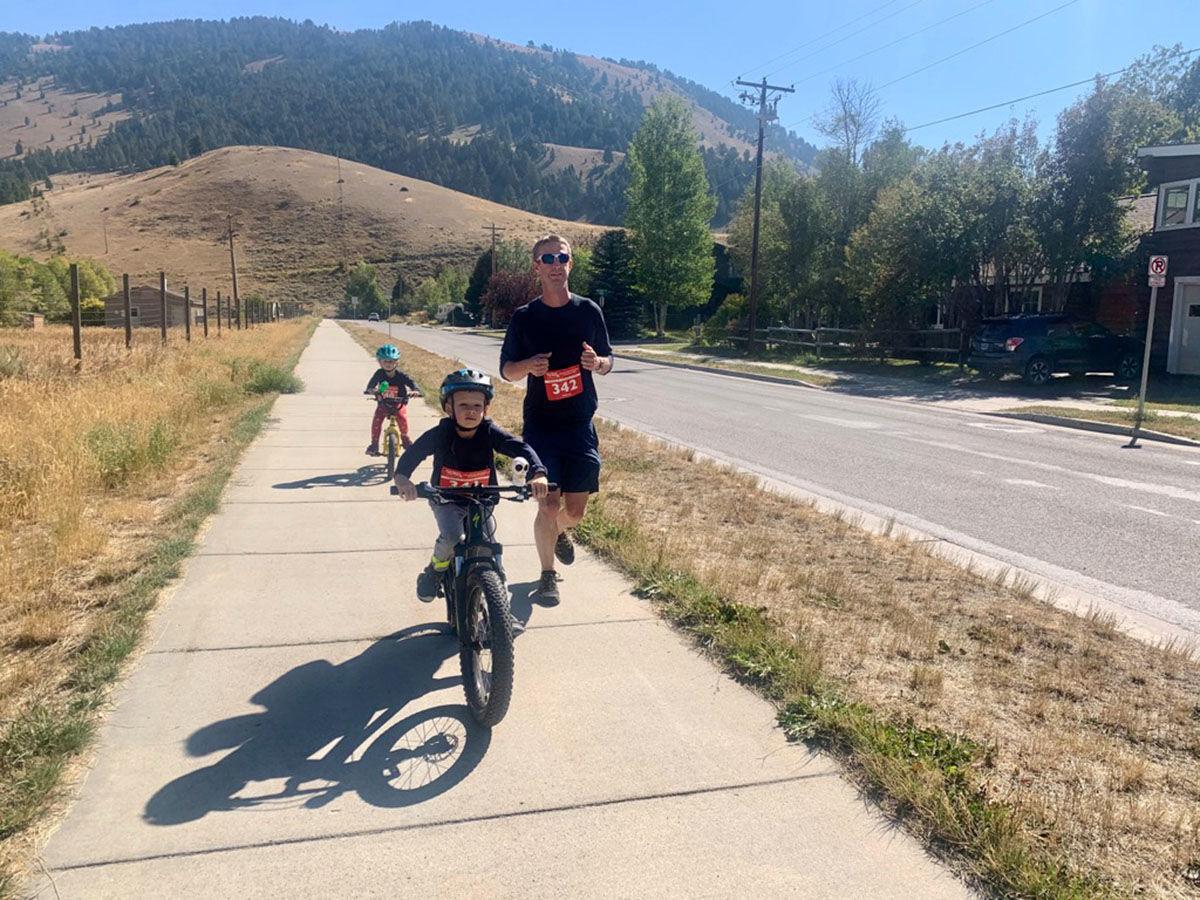 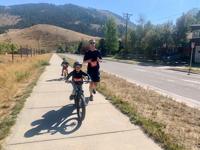 Teton District Health Officer Dr. Travis Riddell jogs through East Jackson on Saturday with his kids accompanying him on bikes for Old Bill’s Fun Run. Though the coronavirus pandemic precluded the tradtional mass run and walk, all indications are that this year’s version of the the event was fun for participants and just as productive for the nonprofit community. 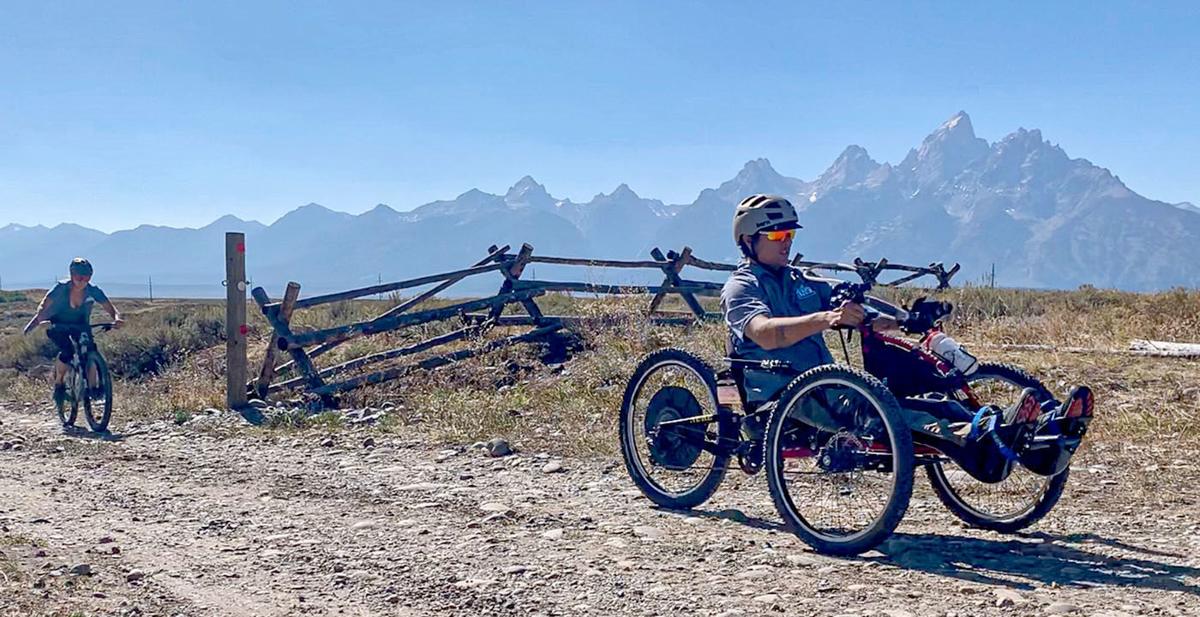 Yard signs along the sidewalk outside the Center for the Arts promote nonprofits soliciting online donations in the 2020 Old Bill’s Fun Run for Charities. While the crowd of 3,000 runners and walkers did not gather on Town Square for 5- and 10-kilometer runs due to the coronavirus pandemic, such signs of nonprofit support and philanthropic giving were everywhere throughout the community.

Teton District Health Officer Dr. Travis Riddell jogs through East Jackson on Saturday with his kids accompanying him on bikes for Old Bill’s Fun Run. Though the coronavirus pandemic precluded the tradtional mass run and walk, all indications are that this year’s version of the the event was fun for participants and just as productive for the nonprofit community.

People in horse costumes danced to music on Town Square and more than 200 rubber ducks raced down Flat Creek as Jackson Hole’s large nonprofit community celebrated throughout the days leading up to Saturday’s Old Bill’s Fun Run for Charities.

Though this year didn’t resemble the huge philanthropic event of years past, which easily drew more than 3,000 runners and walkers to pack East Jackson streets, people still stepped up to donate and participate in this year’s unusual 24th annual event.

Anne Bradley, director of marketing and communications for the Community Foundation of Jackson Hole, which has organized the giving season and the running event since the beginning, said that while the deadline to donate to favorite nonprofits through Old Bill’s hasn’t passed, this year’s 71 co-challengers have already surpassed last year’s numbers.

And though the foundation couldn’t host an official run, she saw community participants finding different interpretations of the 5- and 10-kilometer run through social media, emails and friends.

“I saw everything from 20-mile bike rides up in the park to hiking around town and actual 5-k runs,” she said.

At 9:50 a.m. Saturday, I met the Smits and Shinkle biker gang at the Center for the Arts start point, one of the suggested routes on the Old Bill’s website.

My running mate, Drew Barrie, and I bonded over our surprise at the small turnout. But regardless of the number of people present, at 10 a.m. sharp 9-year-old Sebastian Smits took out his Old Bill’s cowbell and rang it loud and proud throughout the streets. A minute of ringing passed, and then we were off.

Barrie served as our group’s living GPS, shouting out “Right! Left! Straight!” as he interpreted the route drawings on his phone.

I waved to people throughout my run, wondering if they knew we were doing this for Old Bill’s.

As we approached the imaginary finish line, Charlie Shinkle took out his phone and played “Eye of the Tiger” to distract me from my clear lack of stamina. Once we made it to the end, it felt good.

We bid farewell, and the biker gang headed over to the park, where they found an ice cream stand waiting and ready for them. Thomas Smits, the senior vice president of Rocky Mountain Bank and an Old Bill’s co-challenger, later said that although our run ended up being more intimate than expected, he saw people throughout the day moving for Old Bill’s.

“I think it got the community out for the day,” he said, “and I think people attended the farmers market, supported our restaurants, and even though it was reimagined, I guess, it got people out and about in the community to support our local businesses.”

Smits said he enjoyed biking over running and liked having the option this year. It was also a great way to spend time with his Jackson Elementary School sons, whose effort raised money for their school’s sports programs.

According to last year’s Old Bill’s report, education received the third-largest amount of donations, behind conservation/environment and, the largest field, health and human services.

Joe Stone, newly appointed director of mission with Teton Adaptive Sports, celebrated Old Bill’s a day early at Shadow Mountain with a small group of staff and board members.

A decade ago Stone had a speed flying accident in Montana that caused a spinal cord injury, paralyzing him from the chest down. So with a personal understanding of the need for adaptive sports equipment, Stone rode along with his colleagues Friday in a motorized three-wheel bike, enjoying the day and riding for a cause.

“The bike allows me to keep up with everyone else, and nobody’s really having to hold back and wait for me, since there’s a motor,” he said. “Doing it with my arms, I’d be a lot slower.”

Some of the money Stone and his group raised through Old Bill’s will go toward buying new adaptive sports equipment, giving out scholarships and grants for those who can’t afford ski passes or gear, and training both in the Teton Adaptive Sports network and beyond.

“This not only furthers our own training,” Stone said, “but it also provides training to other organizations that we partner with, like Jackson Hole Mountain Resort and Rendezvous River Sports, so that we can help train their employees and get them all dialed in.”

The Community Foundation hasn’t started tallying the total amount of money raised this year but was excited to see the community turn out.

The Old Bill’s giving deadline is still a few days away. People can donate or even become a co-challenger until 2 p.m. Friday. In fact, according to Bradley, 60% of Old Bill’s donations roll in during the last week of giving.

For information on how to get involved, visit CFJacksonHole.org.

Love it! Thank you. We give the Community Foundation of Jackson Hole and all the amazing non-profit organizations an A+ for ADAPTING to this year's circumstances for the #oldbills2020 Fun Run Day Reimagined!