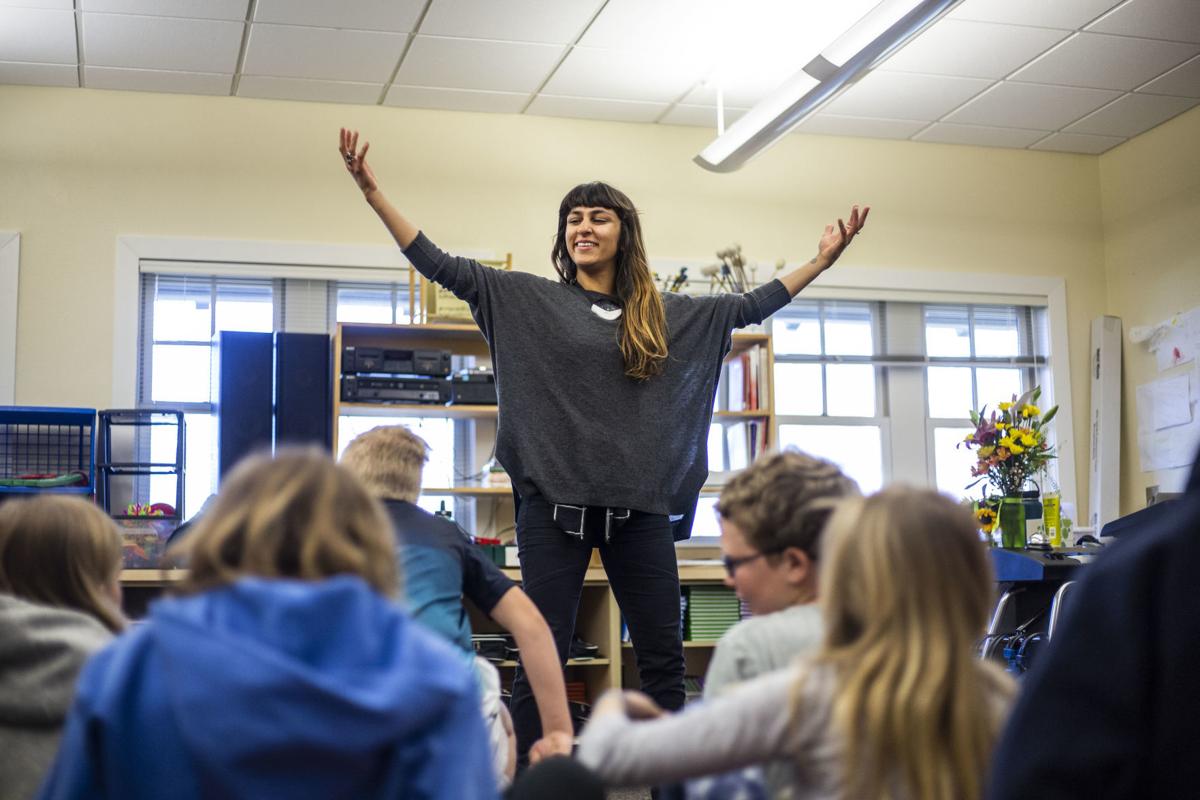 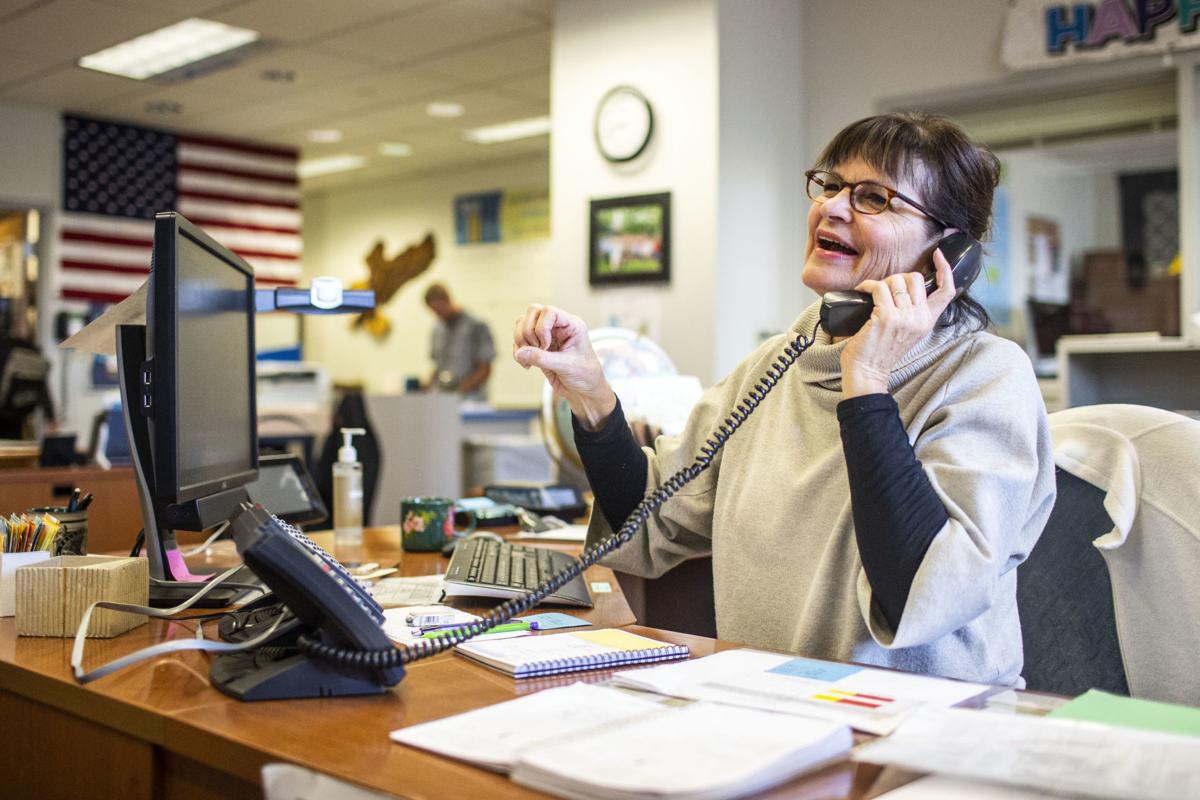 Sheena Dhamsania is a rock star in more ways than one.

She arrived at school at 7:30 a.m. Friday. After an interview with the News&Guide interspersed between her classes, she finished out the day before catching a flight to Salt Lake City. Bandmates picked her up and hit the road to a Utah ranch outside Moab, where she played a gig that night.

Winning the district’s award, a pathway to the statewide Teacher of the Year honor, means a lot to Dhamsania.

“I see people doing amazing things all day,” she said. “It’s nice to have the role of teacher be recognized in this community.”

She described the accolade as a humbling experience, as well as a deserved shout-out to specials classes like music.

“Arts education helps to develop the whole child,” Dhamsania said. “As a teacher, music is my tool to support students emotionally and creatively, and I am grateful to teach in a district where this is not only supported but celebrated.”

Dhamsania has taught in the district for five years. Principal Kathy Milburn said during an awards ceremony last week that Dhamsania has made music a “major centerpiece of the school” and “to talk with Sheena is to have your spirit uplifted and your day made better.”

“Music has always been integral to my life,” she said.

Growing up, she found a sense of identity in Indian dance and an “absolute love” of singing and instruments. After studying music at Michigan State University she toyed with the idea of a performance career but ultimately decided it would be too solitary for her extroverted personality.

“When I realized the integration between education and music existed, I was so excited to put that together,” Dhamsania said.

She teaches students in kindergarten through fifth grade at Wilson. She has taught in Kelly and Moran and will pick up Alta Elementary School next year. Her classes all know how to pronounce her last name because it rhymes, she tells them, with lasagna.

“The beauty of being a specials teacher is that I get to see these students grow from kindergarten to fifth grade,” Dhamsania said. “I see them when they’re learning their first letters to when they’re becoming young adults.”

Each year Dhamsania tries to “reinvent” herself to keep the music curriculum fresh and stimulating. Her favorite instrument of late for her students is the ukulele, so they can work on hand coordination and singing at the same time. She also brings music technology into her lesson plans, introducing things like DJs and Apple’s music editing software GarageBand.

“It’s a little updated from recorders,” she said of the quintessential elementary musical instrument.

New this year is a student rock band called the Growlin’ Grizzlies. They practice after school on Wednesdays.

“It’s been so fun,” Dhamsania said. “The kids get total creative control of it.”

Joyce Sawczuk is a secretary to all the middle school students, teachers and parents. In that sense she’s like a roundhouse in a train station. The train comes in, she tells it where to go and gets it on its way.

“We help anyone who comes to us,” she said.

Whatever people need, Sawczuk can help. She has the 15 years of experience to know what does and doesn’t work.

That’s why colleagues have the expression, “Joyce is choice.” It means she’s the go-to person for anything and everything because she’ll be able to do whatever needs to be done.

That could mean helping parents who aren’t sure how to navigate the system, teachers who locked themselves out of their rooms or kids who need to be found so they can leave early for a medical appointment. Sawczuk helps parents with their computers, students with bloody noses and everything between. She’s in constant motion.

She compared her day to “trying to change a tire on a moving car.”

She is also responsible for keeping track of everybody, a growing feat in a growing school. There are 710 students enrolled at Jackson Hole Middle School, roughly 250 more than when the school opened in the 1990s.

But Sawczuk doesn’t just execute logistics. She lends an ear in the halls and is a friendly face for students who need empathy. She’ll wait with students when they miss their bus.

“You might be the first smile that child gets that day,” she said.

Like Dhamsania, Sawczuk went to college at Michigan State University. She worked in public relations for a school district in Michigan before moving to Wyoming.

“I enjoy the administrative end, so I applied for this job,” she said. “I can’t think of a more important way to spend my time than in the service of education. It continually rewards you.

“When you can wipe a tear, when you can ease a child’s anxiety, that stays with me.”

A lasting mark Sawczuk leaves on the community is teaching a generation of students their manners. Once, two girls who had since graduated and moved on to high school came back with a plateful of cookies for Sawczuk and a “thank you” for teaching them their manners.

“You never know how much you touch the future,” Sawczuk said.

She likes seeing students blossom, from timid sixth graders to eighth graders who are “ready to run the world.”

Like the eighth graders she sends off to high school, Sawczuk will be spreading her wings soon and retiring at the end of the year. She plans to move back to her home state of Michigan to spend time with her family, learn to cook from a master chef and garden in a more hospitable climate.

“I look forward to growing tomatoes again,” she said.

She will miss the middle school, she said. And the Tetons.

“It’s been the best life ever, ever, ever,” she said. “But I’m very ready for the next adventure.”

Teacher of the Year nominees

Staff Person of the Year nominees