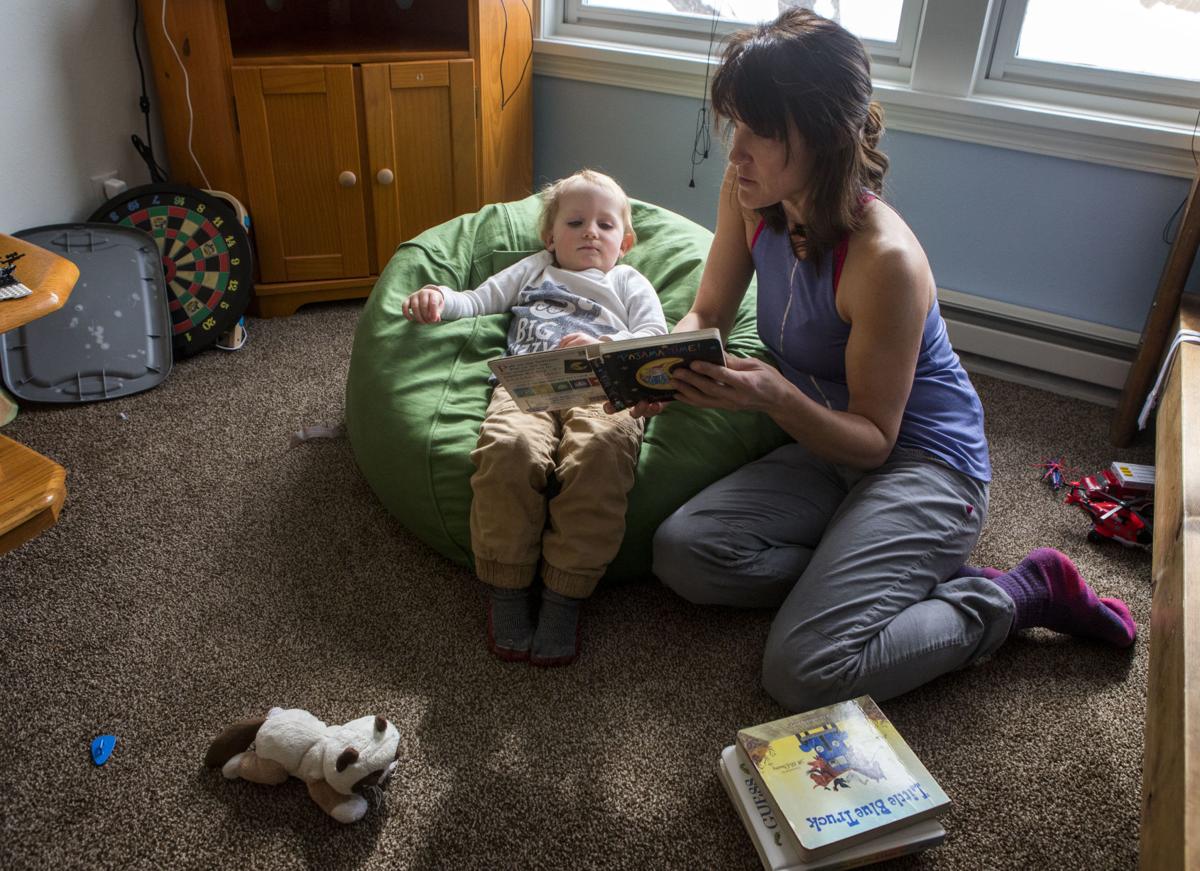 Kate Falk reads to her son Donovan, 2, before his nap Thursday afternoon at their home in Jackson. 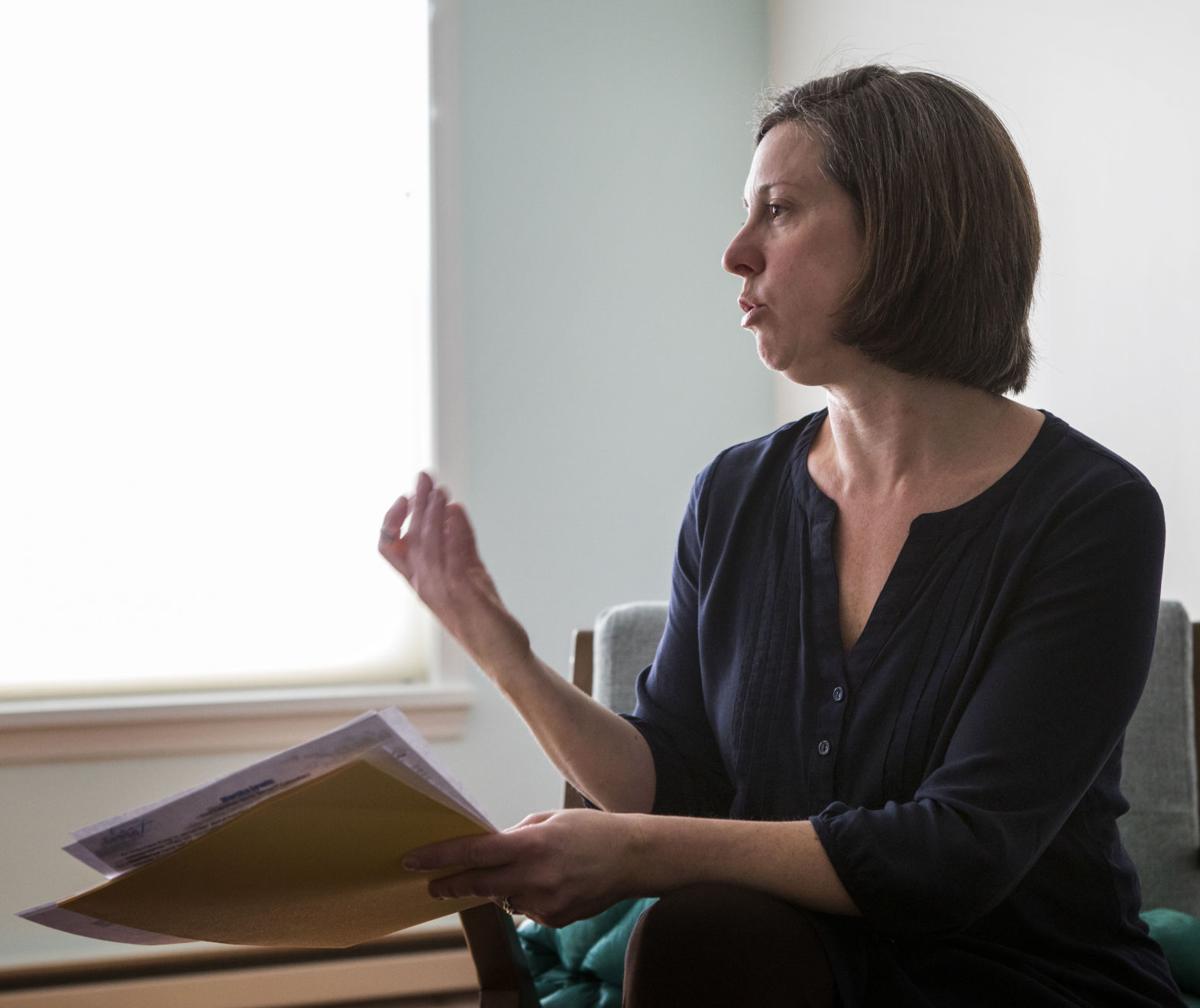 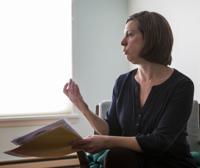 Martha Lewis creates a sleep plan for Donovan at their home consultation on Feb. 22. 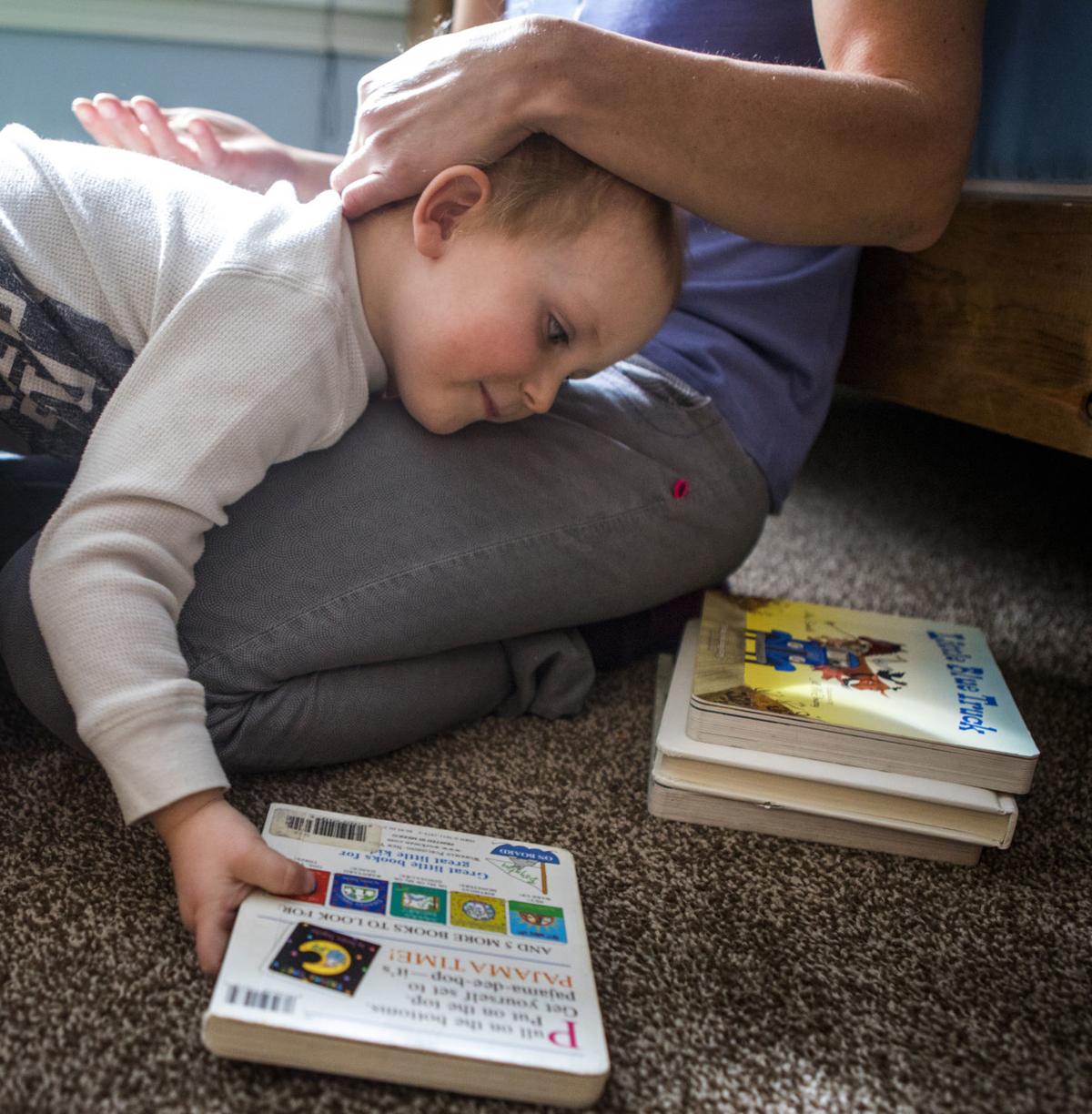 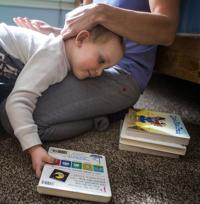 Donovan chooses a book for his mother to read to him before his nap Thursday afternoon. Reading is part of a routine to help him go to sleep. 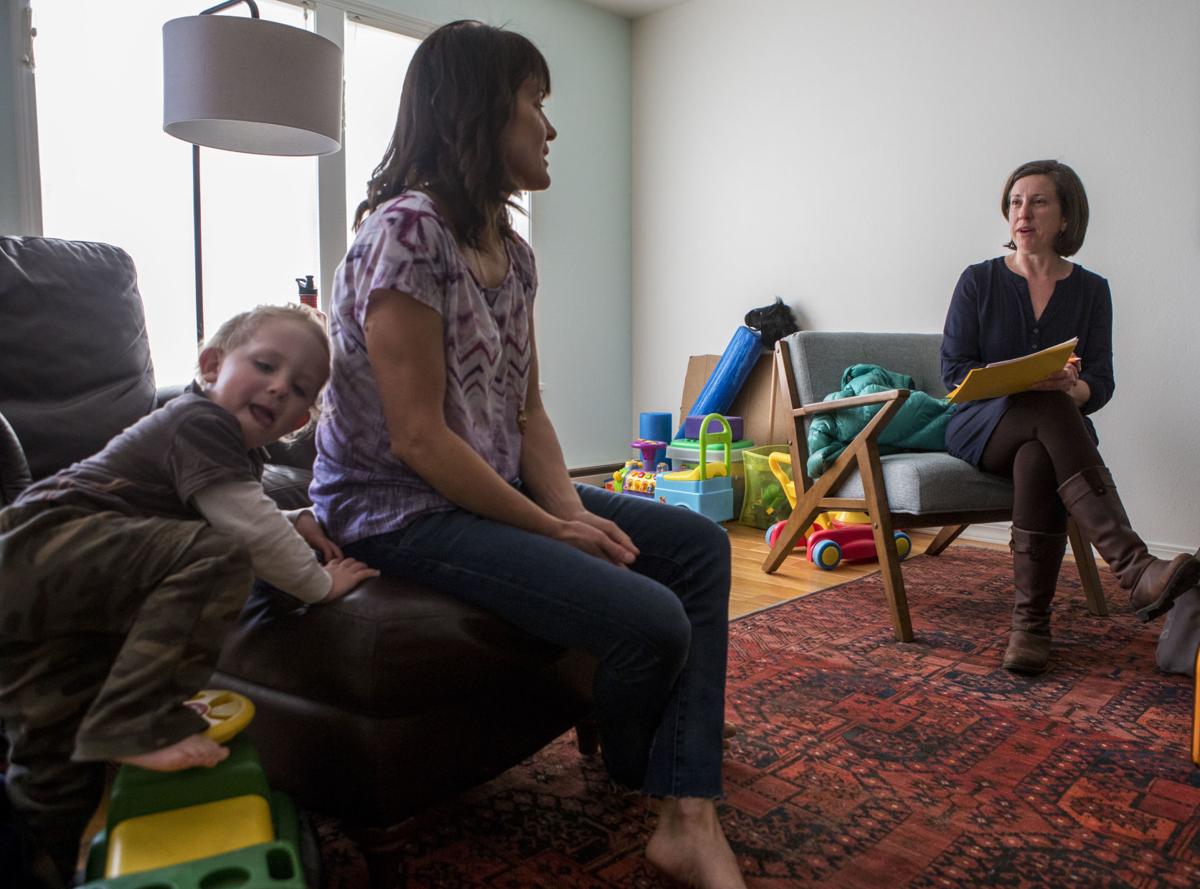 Martha Lewis discusses a routine for Kate Falk and her son Donovan, 2, during their Feb. 22 sleep consultation. 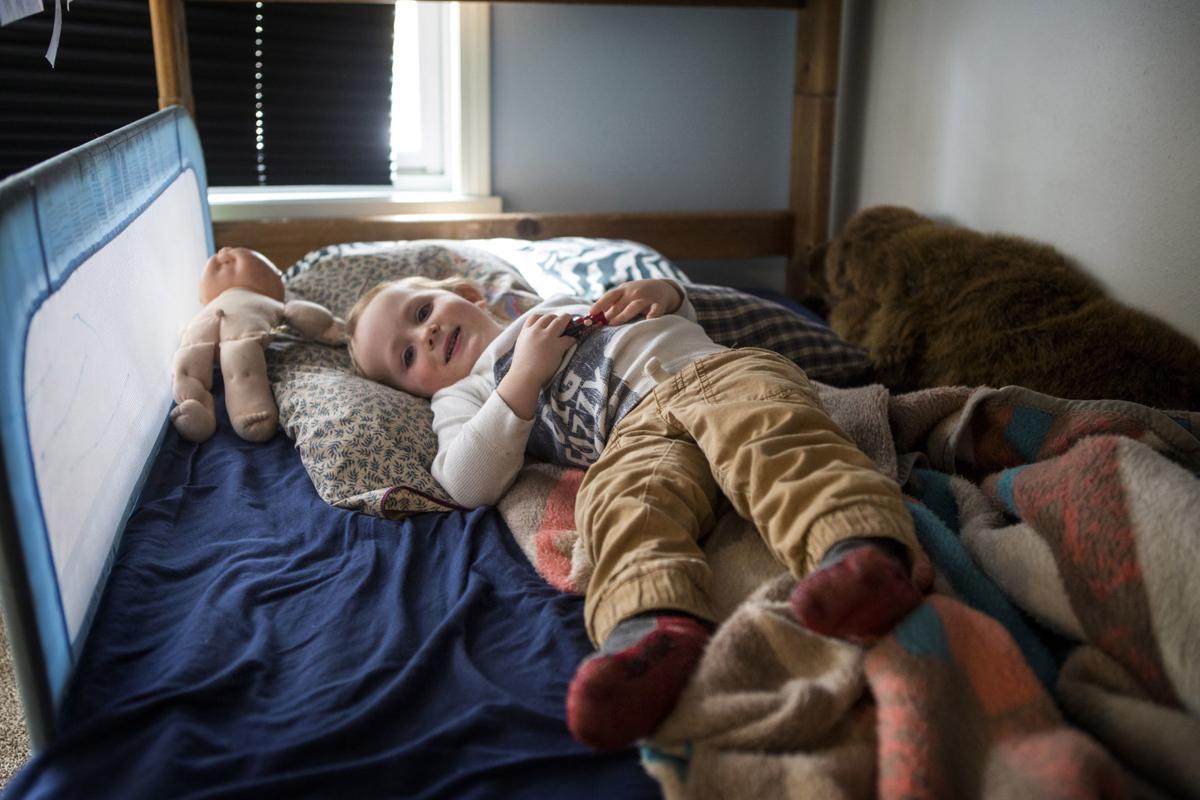 Donovan Falk, 2, lays down for a nap Thursday afternoon.

Kate Falk reads to her son Donovan, 2, before his nap Thursday afternoon at their home in Jackson.

Martha Lewis creates a sleep plan for Donovan at their home consultation on Feb. 22.

Donovan chooses a book for his mother to read to him before his nap Thursday afternoon. Reading is part of a routine to help him go to sleep.

Martha Lewis discusses a routine for Kate Falk and her son Donovan, 2, during their Feb. 22 sleep consultation.

Donovan Falk, 2, lays down for a nap Thursday afternoon.

Kate Falk has had many sleepless nights in the last two years.

Her son Donovan is 2 years and 4 months old and rarely sleeps through the night. He cries, refuses to go to bed, throws tantrums. She has found that she is the only thing that seems to calm him down.

“I just end up letting him sleep in my bed,” she said. “Even though I know that just makes the problem worse, it’s the only thing that lets us all go to sleep.”

The instinct to pull a sleepless child into bed is one that many parents are familiar with. Falk has another son, a 6-year-old named Anders, who sleeps in the same room as his brother, so letting Donovan into her bedroom is often better than the whole family staying awake half the night.

But allowing Donovan to sleep in her bed whenever he is restless has created a problem. Now he relies on her as a “sleep prop,” meaning he needs her to be in the same room to be able to doze off. Spending nights crammed into her son’s twin bed, sleeping sitting up against the bedpost or sharing her bed with a squirmy toddler leaves her perpetually tired.

Falk knew she needed to find help before Donovan’s sleep habits became more ingrained than they already are. So she turned to Martha Lewis.

Lewis is a sleep consultant who works with parents of babies and toddlers who share Donovan’s sleeping problem. She has a certification from the Sleep Sense program, which founder Dana Obleman started to pass along the things she had learned while working with her own child. The program’s calling card is that it provides “sleep training,” a method of giving parents concrete steps that create a firm bedtime routine.

Lewis has the added professional benefit of having been in Falk’s shoes.

“When my son, Parker, was young, he woke up all the time,” Lewis said. “So I started researching ways to get him to go to sleep.”

Lewis tried everything — nursing, white noise machines, rocking him to sleep on an exercise ball — but nothing had a lasting effect. So she hired a consultant.

“Within a few days, he was sleeping through the night in his crib,” she said.

Encouraged by that success, Lewis turned her interest in health toward the science of sleep. She has a Master of Science in holistic nutrition and has practiced and studied nutrition for over a decade, but she wanted to pass on the experience she had in working with a sleep consultant. She saw how when her child slept through the night, she was more energetic, alert and, most importantly, happy.

Lewis sought out the same training her sleep consultant had undergone, and after a three-month program finished the Sleep Sense certification. With her new credentials in hand, she started Happy Little Camper, her consulting business in Jackson.

Lewis likes the job because she provides relief to harried parents, and she enjoys that each client is different. She works with newborns, infants and toddlers and knows the strategies that work with one age group may not work with another.

At almost 2 1/2 years old Donovan certainly fits into the “older kid” category, with all the deep-seated routines that make solving slumber issues more difficult. But there are a few other factors that may keep him up at night.

Falk said she has always been a traveler, moving seasonally and going on trips throughout the United States. Taking her children on her trips may have added to Donovan’s struggles because where and when he sleeps has not always been consistent, and moving between his own bed and ones in other people’s houses means he may have trouble attaching to his own bedroom. Also, Falk said, a lot of people she visits just have one guest bedroom, meaning Anders and Donovan sleep with her, undermining any efforts at home to wean Donovan off sleeping in her bed.

But even though Donovan is so young, loss had already affected him, perhaps in ways that make sleep difficult. His father was Gary Falk, the Exum guide who fell to his death on the Grand Teton in July 2016. Because Donovan was less than a year old when his father died, Kate Falk doesn’t think he has conscious knowledge of the incident.

“But as far as factors, that’s obviously contributed” to his sleeping troubles, she said.

According to the National Child Traumatic Stress Network, children who experience trauma, such as the sudden loss of a caregiver before age 6, can display a range of symptoms, including fear of being separated from their parent or caregiver and difficulty sleeping. Donovan displays both of those symptoms, and his anxiety over him and his mother sleeping in separate rooms exacerbates his trouble falling and staying asleep.

When Falk called Lewis she wasn’t looking for answers to any of Donovan’s psychological trauma — that’s outside the purview of a sleep consultant. All she wanted was for Donovan to get enough shut-eye to be a happy, healthy child.

The American Academy of Sleep Medicine recommends that children Donovan’s age log 11 to 14 hours of sleep each day, including naps. Falk said that while her son sometimes sleeps 10 hours a night, usually it’s more like seven to eight hours. Missing that much sleep can lead to developmental problems and a higher risk for accidents and injuries, according to the academy.

Donovan is generally happy, but when tired he becomes cranky and cries a lot. Calling Lewis was a step toward minimizing those behaviors.

Lewis starts by having parents fill out a preliminary questionnaire detailing sleep habits, behaviors and routines. Then she visits the family for a consultation, at which she outlines a plan she thinks will help the child.

“There’s no one plan that works for every kid,” Lewis said. “I have lots of strategies, and I have to see which ones work best each time.”

She visited Falk’s house recently for the consultation. She suggested a strong bedtime routine and gave Falk firm actions to take when Donovan tried to get out of bed. And she was clear: He could not sleep in his mom’s bed anymore.

The consultation is generally the only time Lewis meets with the family in person. After developing the initial plan, Lewis said, most of her job is to support caregivers in sticking to the schedule and offering adjustments if particular ideas aren’t working. The parents keep track of how much their child is sleeping so that Lewis can see if the plan is making a difference.

Lewis said that usually within a couple of weeks, noticeable change has occurred for younger kids. She works with toddlers for three weeks because they may take longer to shift their habits.

But Donovan, in spite of having some factors that could make adjusting his sleep schedule more difficult, showed improvement within the first week. Five days into his new sleep schedule he woke up just once and was able to go back to sleep on his own. But that doesn’t guarantee smooth sailing for the rest of the program.

“She said, ‘Congrats, but don’t expect this to be the norm,’” Falk said.

Since that first successful night there have been ups and down. Sometimes Donovan wakes up for several hours, other times for just a few minutes. But the overall trend seems to be “toward better sleeping,” she said, and routine seems to be helping.

When Donovan is ready for a nap or to go sleep for the night, he brushes his teeth and then hops into a beanbag chair. Falk reads him a book — only one — then he crawls into bed while she pulls down his new blackout shades. Even in the middle of a sunny day, she turns the room completely dark.

“They really help,” she said.

Falk has made some adjustments, like allowing Donovan to keep his door open as long as he is in bed, that have helped the new habits stick. Nap time, which used to be a struggle, has become much better. Within the last week he has slept close to the recommended length of time for a kid his age.

On Thursday he slept without waking from 8 p.m. until about 5:45 a.m., a more than nine-hour stretch that allowed his mom to also have a full night’s sleep for the first time in months.

“That was nice,” Falk said. “As a mother it’s great to see him sleep through the night. And it’s great for me.”

Though Donovan still may need some adjusting to his new schedule, and he may continue to wake up early for a while, the consistent sleep will only accentuate the positive parts of his personality.

“My kids are pretty positive and resilient,” Falk said. “Since we started this, he’s in general a much happier kid.”