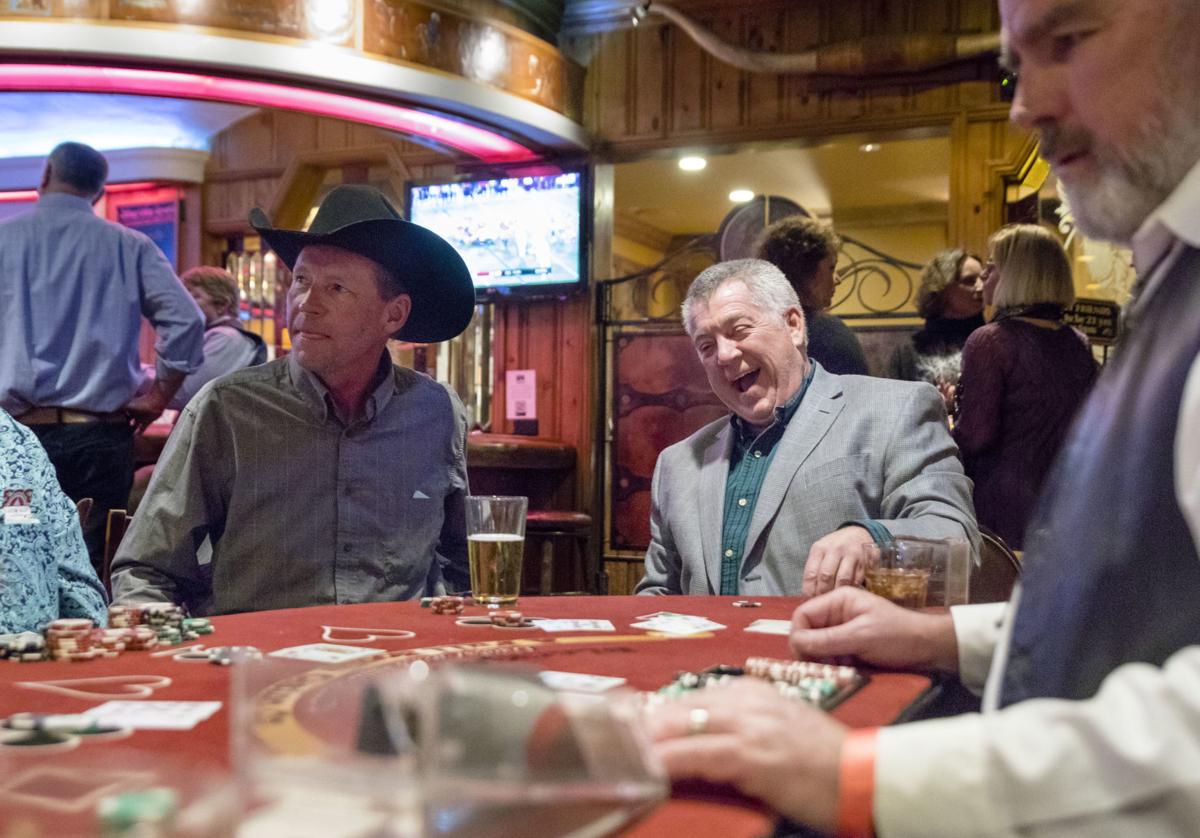 Steve Hardeman and Patrick Trucco play blackjack Saturday during Casino Night at The Wort Hotel. Attendees could test their luck at various casino games throughout the event with the fun money they received with tickets. 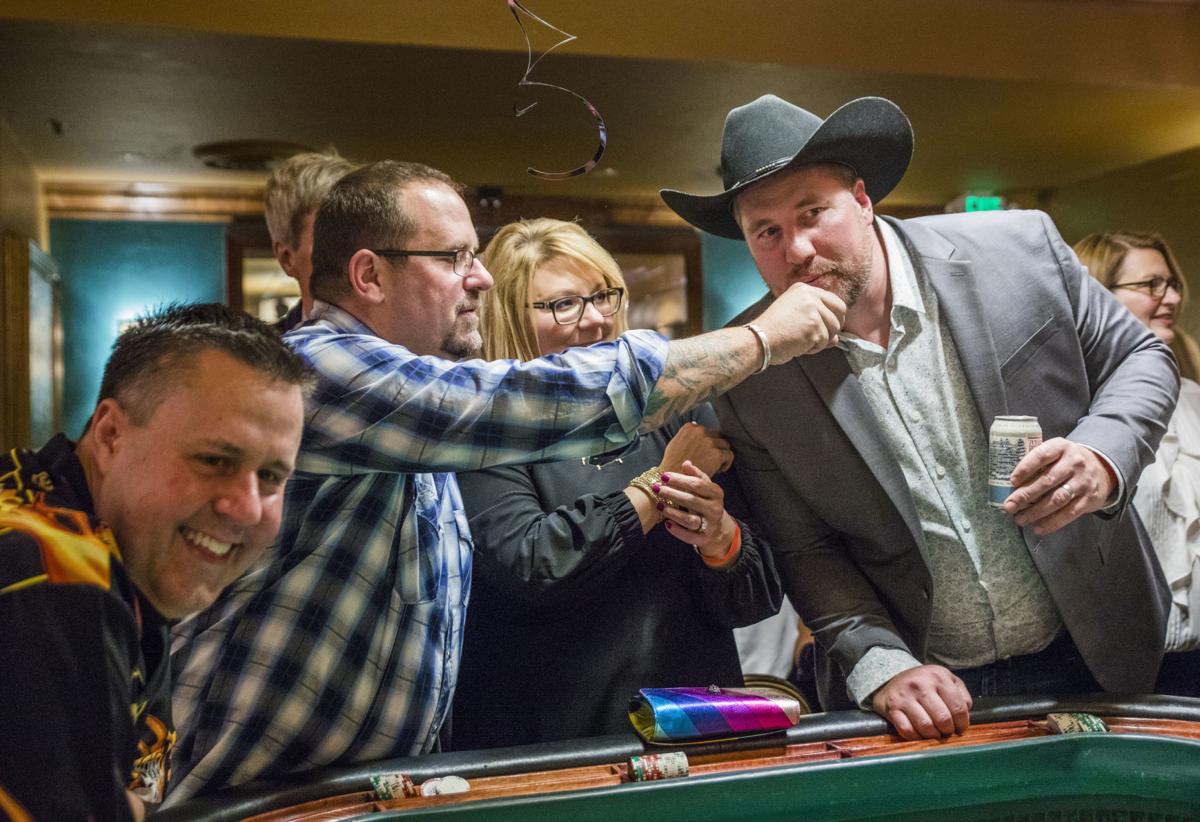 Wes Clarke blows on the dice before Charlie Shinkle rolls them while they play craps Saturday. The scholarship funds benefit students bound for four-year colleges but also those who headed for community colleges and vocational programs.

Craps players at Casino Night have mixed reactions as the number rolled by Charlie Shinkle (left) is read off. Casino Night, an annual event put on by the Rotary Club of Jackson Hole Lunch Club, raises scholarships for graduating Teton County students.

The Silver Dollar Showroom was packed to the gills Saturday night. And loud.

By the crush of people eating dinner in the Showroom, it seemed every Jackson jetsetter attended Casino Night, a Rotary Club of Jackson Hole Lunch Club party-slash-fundraiser at The Wort Hotel.

Over plates of prime rib, shrimp and satay skewers, attendees readied themselves for a night of gambling, dancing, drinking and, in the process, supporting the collegiate ambitions of Teton County students.

“This community has rallied around this event, and we are so proud,” Jim Waldrop told the crowd as dinner wrapped up. “This is for the scholars of our community.”

Waldrop, a Rotarian who sits on the committee that will award the scholarships in the spring, is the general manager of The Wort, making him instrumental in putting on the event. As such, he received raucous applause throughout his remarks, but he continually deflected the praise toward the Baxter family — which owns The Wort and sponsored the event — and the nearly 70 sponsors who bought tables and those who donated to the Rotary scholarship fund.

In a town that seems to have a fundraiser for everything, Casino Night might be on its own level, drawing representatives of every sector and strata. Principal donors for large philanthropic organizations like the Hughes Family Foundation hobnobbed with teachers, art gallery directors and nonprofit leaders.

Waldrop and the others who spoke during dinner, including Teton County School District No. 1 Superintendent Gillian Chapman and Rotary Lunch Club President John Goettler, attributed the popularity of the event to the cause: college scholarships. Giving to those who have their futures ahead of them, who are considering the ways they can influence the world and realize their potential, simply isn’t a hard sell.

“This money all goes back to students in our valley,” Goettler told the crowd. “I hope my kiddo is one of those lucky recipients this coming year.

“It’s amazing how we are able to support a brighter future for students in the valley.”

The jam-packed scene was evidence of a theory posited in a seminal study on philanthropy by Russ Alan Prince and Karen Maru File. Their 1994 examination of donors identified “seven faces of philanthropy,” or wide labels that encompass the reasons benefactors contribute to causes and organizations.

Though all seven “faces” were probably present at The Wort, a pair of Prince and File’s labels likely fit the bulk of the Casino Night attendees.

“Communitarians are part of the local environment and are often business owners. They strongly focus on how to make their community a better place to work and live,” Prince wrote in a Forbes article. “Socialites find that they can help nonprofits and have a good time doing so. They accomplish this through social functions — ones they produce and ones in which they participate as guests.

The party atmosphere, and its social draw, was apparent throughout The Wort. Following the speeches and the live auction led by former state Sen. Leland Christensen, people dispersed through the hotel to play craps, blackjack and roulette in a nod to the hotel’s underground gambling history.

They gambled with “fun money” purchased at the door (so the real money could go toward scholarships). Men rocked wool vests, suit coats, felt hats and the like, and women donned outfits that ran the gamut from contemporary to 1920s period dress replete with boas and furry coats. Particularly at the craps table, they crowded each other to lay chips on the table and yell when their number came up.

Events like Casino Night, besides being a reason to dress up and eat good food, are crucial to convincing communitarians and socialites to donate, according to Prince and File’s study. The overwhelming popularity of the event demonstrates to community-minded business leaders that college scholarships are an important place to devote philanthropic energy, and the cross section of Jackson represented at Casino Night helps social patrons cultivate the relationships integral to their giving.

“To have it on this historic property, it just works,” Christensen said. “It’s a huge win-win, for the kids and for strengthening the fabric of the community.”

Over and over again the true motivation for the evening — Teton County students — popped up conversation and speeches.

A theme arose in Chapman’s short remarks over dinner and found its way into the rest of the evening: Beyond simply wanting to make it financially easier for students to attend college, the patrons hope the eventual scholarship recipients will see the awards as a vote of confidence.

Chapman alluded to the fact that although some students might receive a few hundred dollars — maybe just enough to buy books — the Jackson community’s willingness to invest in them carries its own intrinsic benefit, too.

For most recipients the money won’t cover the cost of school, but it can be the difference between pursuing a college they truly want to attend and the one they feel they can afford.

“Scholarships are the only way these kids will go to the schools of their choice,” Rotarian Shannon Marie Hasenack said. “Anything to help them goes a long way, especially from their own community.”

The desire to give students that sense of choice isn’t just for the Ivy League-bound kids. Teacher Jim Rooks and Rotarian Deidre Ashley spoke about the awards for students who don’t fit the traditional four-year bachelor degree mold.

Rooks talked about the Bob Stewart Vocational Scholarship, which is named after his grandfather and is “very near to my heart,” he said. And Ashley, who sits on the committee that awards the scholarships, pointed to money Rotary gives to community college students that can increase if they complete a two-year degree then move to a four-year institution.

“That’s the nice thing about our scholarships,” Ashley said. “We don’t just have those kids who are the star students from day one.”

In its fourth year now, Casino Night has quickly become one of the more recognizable and popular Jackson fundraisers. It helps that Rotary’s Wine Fest grew into the event, meaning it already had an invested audience, but the combination of gambling, good food and friends in a quintessentially Jackson establishment is enough to draw philanthropists and partiers from around Teton County.

“It’s lively, it’s engaging. It’s one event where people are just smiling,” Christensen said. “As the years have gone by, it’s become an event that people look forward to.

“It’s its own kind of a strange reunion and an amazing cross-section of the community.”