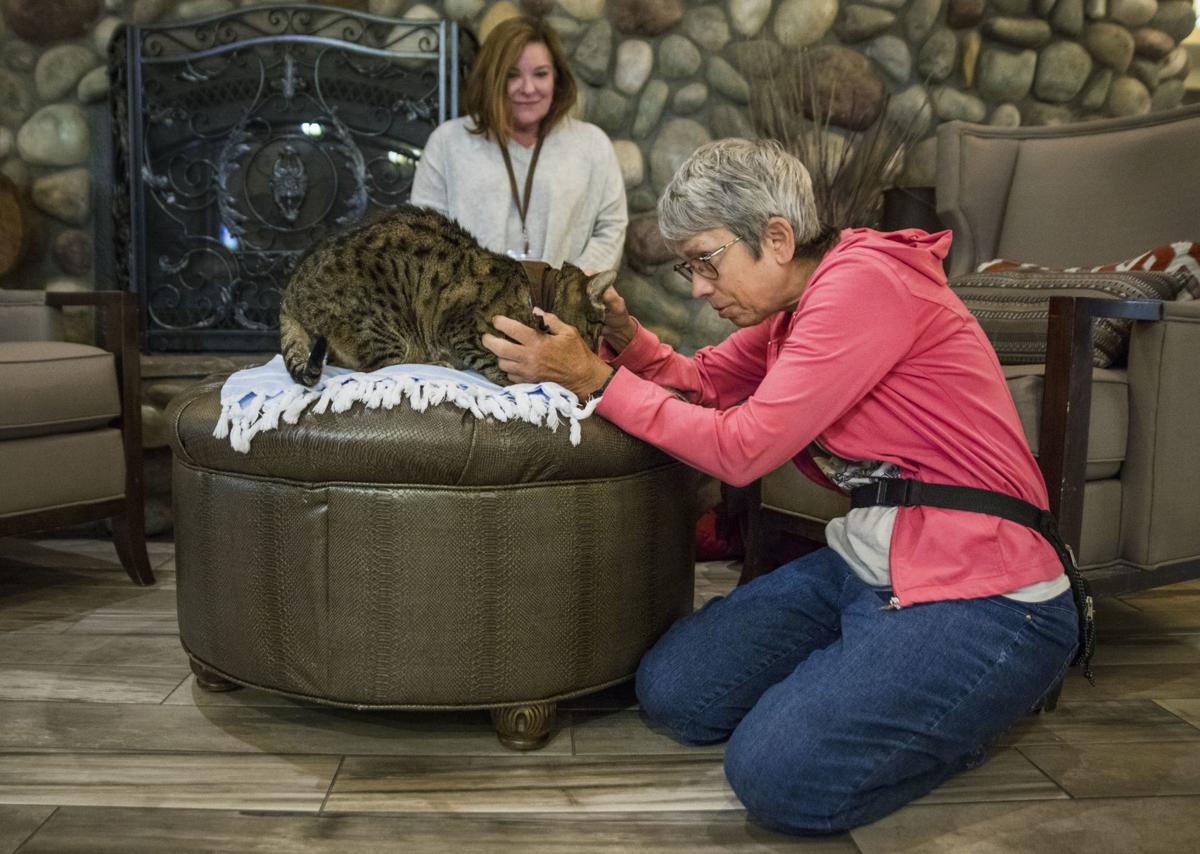 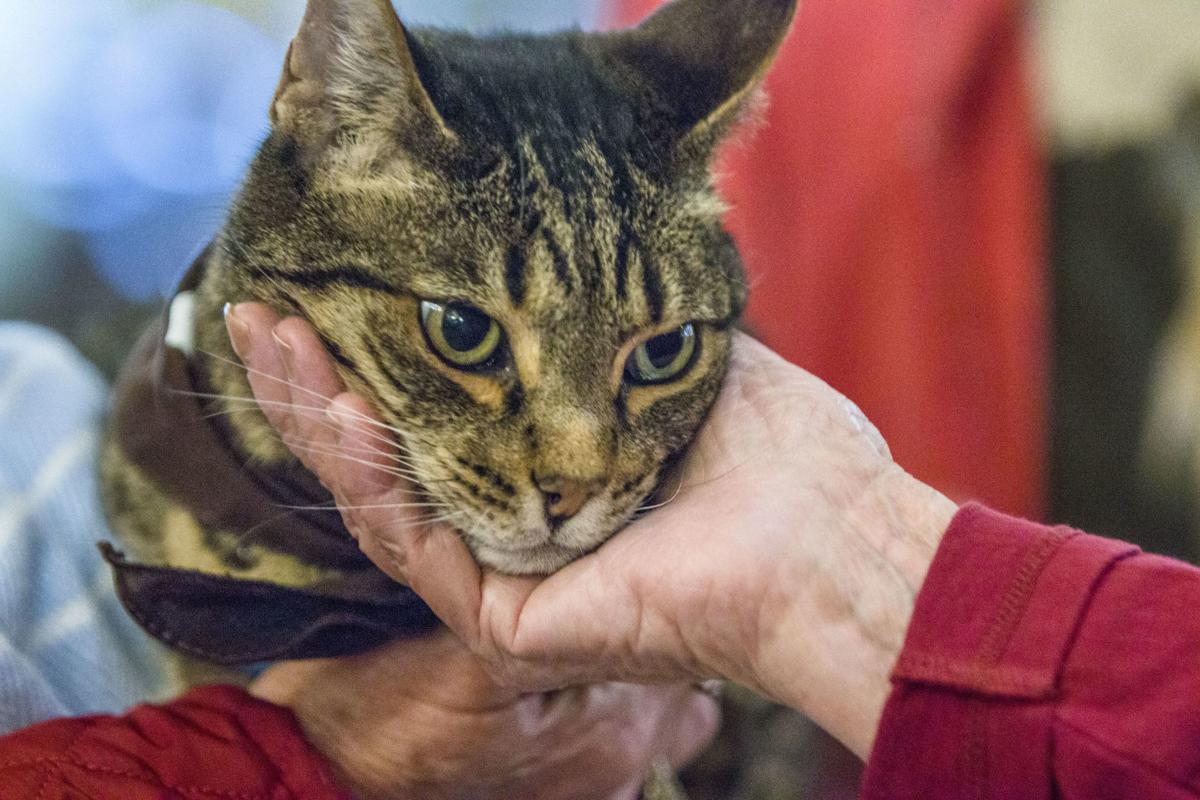 Lazarus, who is 13, is a mellow cat who enjoys being pet, even by more than one person. He’s a “love bunny,” said Godchaux, who’s had him since he was a kitten. “He’s very happy when he gets his attention.” 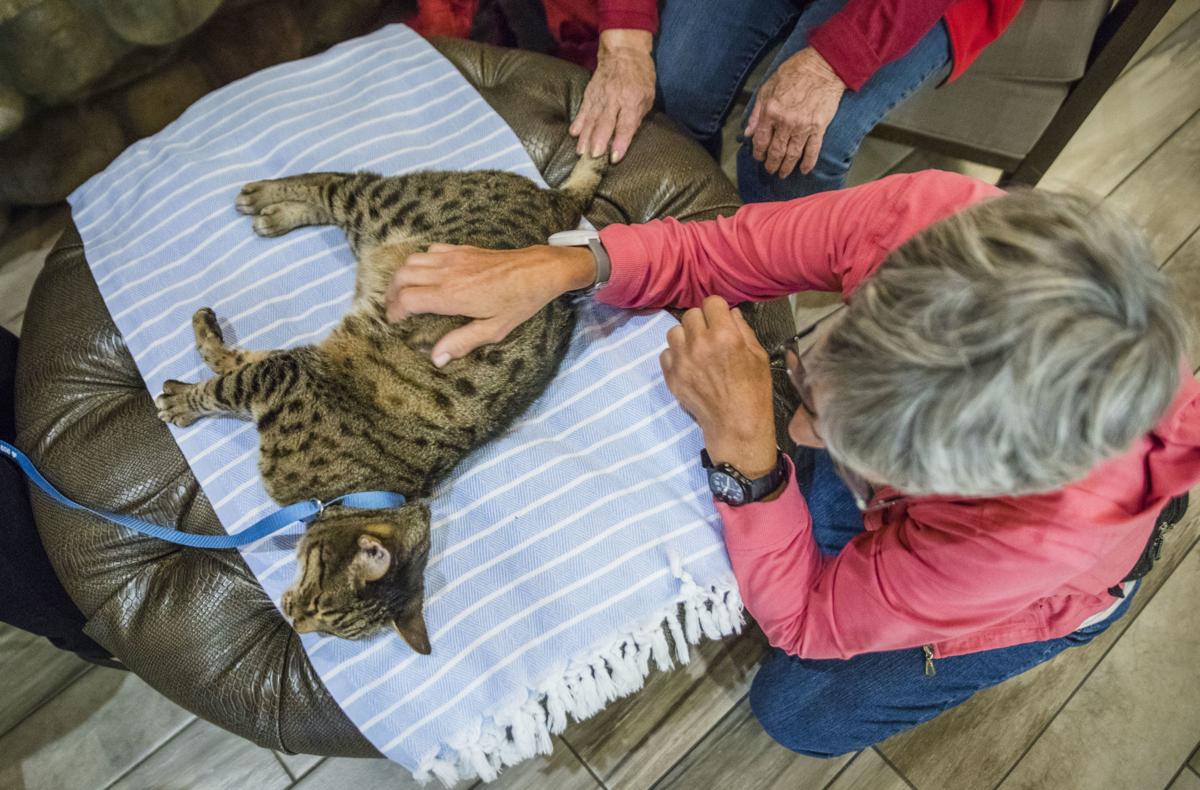 Lazarus, who is 13, is a mellow cat who enjoys being pet, even by more than one person. He’s a “love bunny,” said Godchaux, who’s had him since he was a kitten. “He’s very happy when he gets his attention.”

After a few kisses and scratches on his head and back, Lazarus decided to take the loving to the next level.

He rolled on his side, and as Joan DeMarsh gave him a belly rub he wiggled a leg in appreciation.

Dogs generally enjoy a good belly rub. But the animal in this case was a 12-pound, 13-year-old cat named Lazarus who has infiltrated the canine ranks of Teton County Pet Partners, a nonprofit that sends gentle, friendly animals and their owners to visit seniors, young readers, patients and even airport travelers.

Lazarus recently visited Legacy Lodge at Jackson Hole, arriving in the arms of his owner, Theresa Godchaux. She kept him on a leash as he lay atop a hassock — not that he tried to go anywhere.

“He’s always been a chill cat,” Godchaux said. “He’s very happy when he gets his attention.”

Pet Partners sends teams of dogs and owners to Legacy several times a week for inside visits and, until the snow flies, once a week for a new outdoor Walk With Me program.

Lazarus brings some welcome diversity to the furry side of the volunteer program.

One of the cat lovers is DeMarsh. Though she has two of her own in her Legacy apartment she came out to spend time with Lazarus.

Janet Moyer, another Legacy resident, enjoyed his company, too, though she said she prefers dogs.

“I think they speak our language,” she said. But, she continued, “I like any animal.”

Lazarus is the only feline in the local Pet Partners lineup, though others of his kind have tried. One cat never had the chance to demonstrate its people skills because its owner moved out of town. Another cat did make a few Pet Partners visits but started to show signs of anxiety and had to drop out.

“We want everyone to be happy, including the animal,” Teton County Pet Partners Program Director Kelly Chadwick said.

One thing that makes Lazarus suitable for Pet Partners is his willingness to go for a car ride. Godchaux recalled arriving at Teton Pines for a round of golf one day and discovering, when she went to get her clubs out of the back of the car, that Lazarus had snuck in.

Lazaraus suits Pet Partners standards to a T, and it’s not just his willingness to stay in one place during his visit.

He didn’t freak out when a Legacy Lodge staffer rolled a whiteboard nearby. Pet Partners doesn’t mind if an animal reacts to noise as long as it recovers quickly.

“We test for that kind of stuff,” Chadwick said.

And he submitted to enthusiastic attention from several cat lovers at once.

“You can tell he likes people,” Chadwick said. “He loves to be held and pet. That’s the right cat for the job.”

Lazarus came into Godchaux’s life in 2006, when she was living in Nashville, Tennessee, and was active in fostering homeless cats. Between fosters and her own pets she’s had 75 to 80 cats in her home over the years, she said.

Lazarus and his four siblings were discovered with their mother, a Bengal, on a construction site. Mama had hidden in duct work to have her litter, and someone heard her babies mewing. The family had to be cut out.

That’s how Lazarus got his name.

“I kind of felt he’d risen from ashes,” Godchaux said.

She and her children took care of the kittens until they were ready for new homes. But Lazarus’ affectionate personality tugged at her heartstrings.

“This is why he stayed with me,” she said as she watched the Legacy residents dote on him. “Because he’s such a love bunny.”