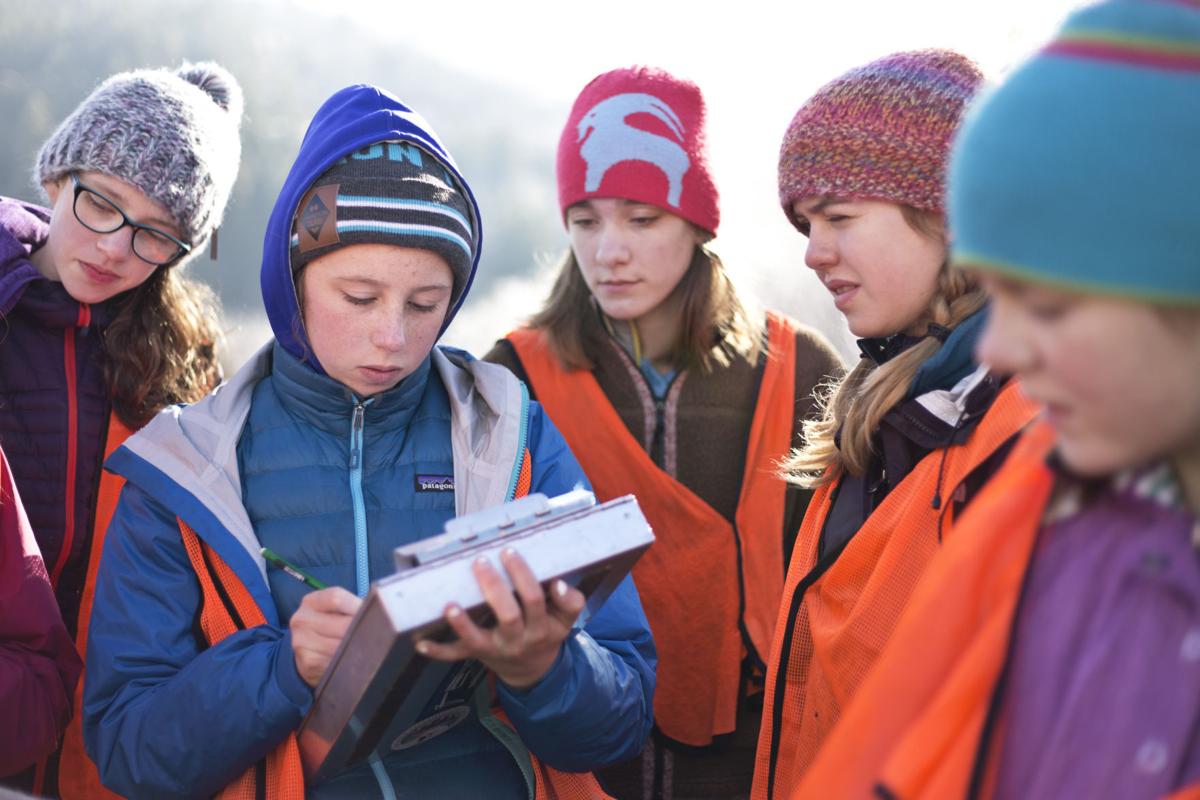 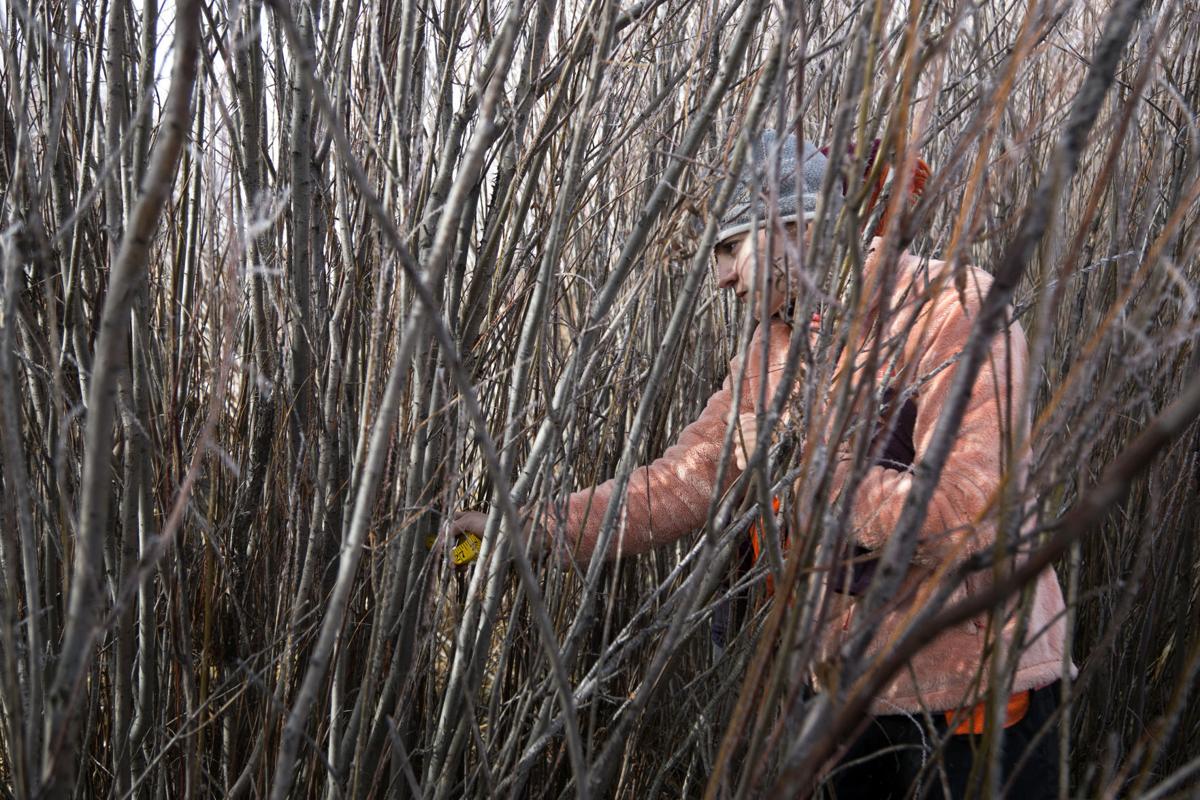 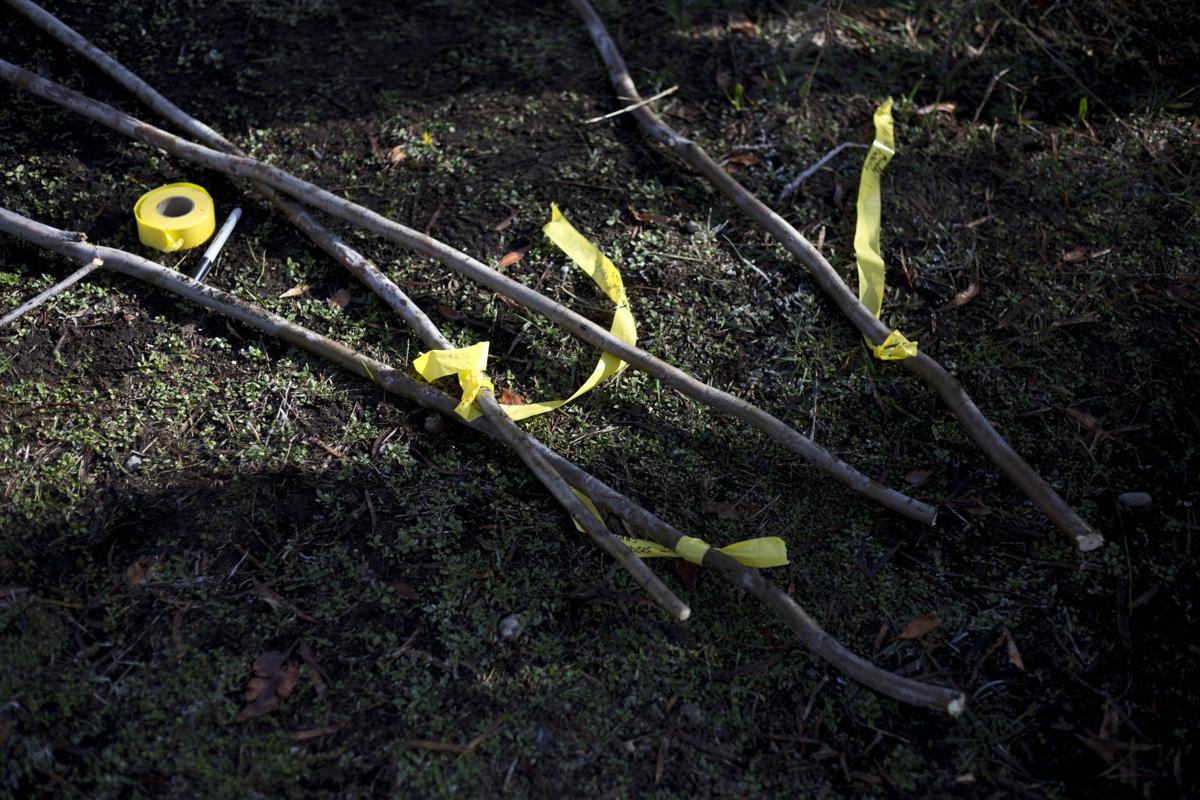 Willows cut into 5-foot pieces, trimmed of branches and identified with yellow ribbon, will be replanted next spring. 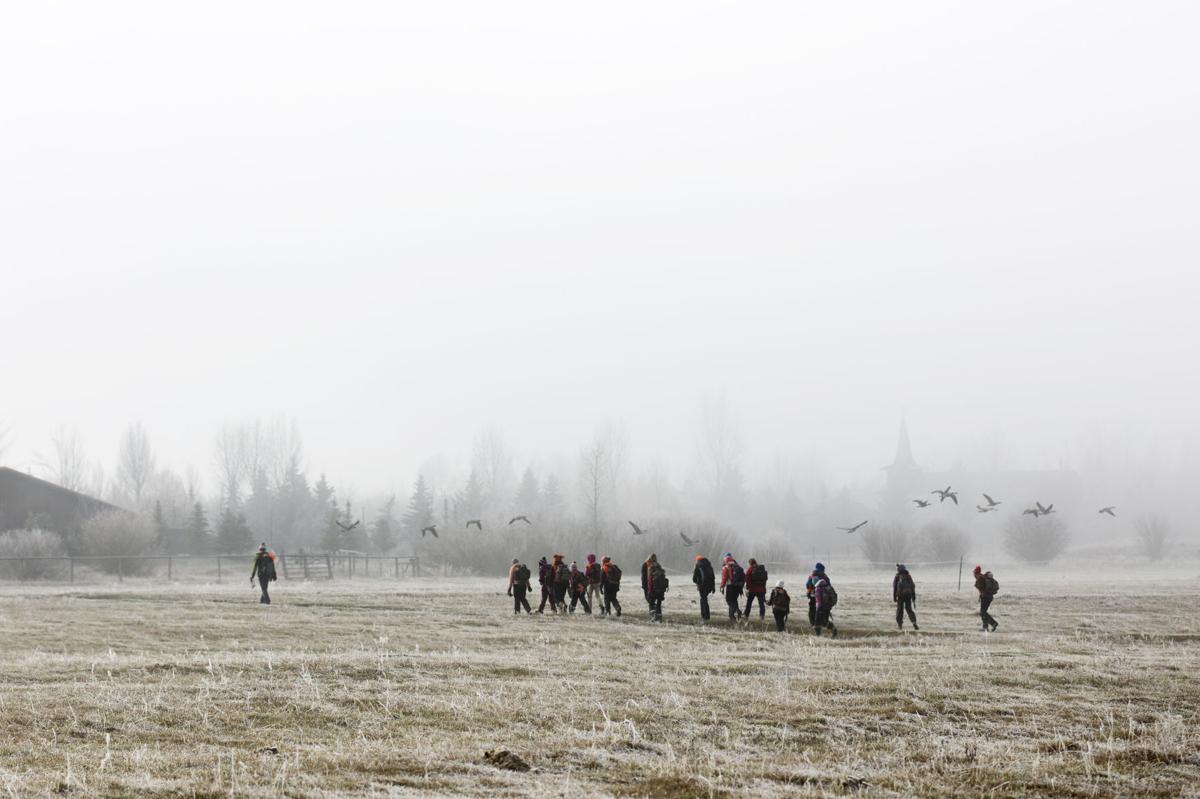 The Teton Science Schools’ Young Women and Science program — a camp for eighth- and ninth-grade students from across the country — walk through fog toward willow trees Nov. 3 near Spring Creek. As part of their stewardship project, the students are propagating willow trees for soil erosion control.

Willows cut into 5-foot pieces, trimmed of branches and identified with yellow ribbon, will be replanted next spring.

The Teton Science Schools’ Young Women and Science program — a camp for eighth- and ninth-grade students from across the country — walk through fog toward willow trees Nov. 3 near Spring Creek. As part of their stewardship project, the students are propagating willow trees for soil erosion control.

It was a foggy, frosty morning as Matthew McGee led two Teton Science Schools graduate students and a gaggle of eighth- and ninth-grade girls across a field near Spring Creek. Their breath puffed into the crisp air and their boots crunched on the ground.

For the 26th year Teton Science Schools hosted a weeklong Young Women and Science program for girls from across the country. Research shows these are the ages when girls who are qualified and passionate about subjects in the field of science can lose interest for a variety of reasons — like peer pressure or gender stereotypes.

“It’s such an amazing, formative period,” said McGee, a faculty supervisor for graduate students at Teton Science Schools. “Girls’ interest in math, science and engineering tends to shift at that point.

“But by catching it now and building a network of girls with the same passion, we hope to make a difference,” he said.

The teenagers’ hometowns run the gamut — east, west and everywhere in between. McGee said the program has participants from Massachusetts, Oregon, Nebraska and of course, Jackson Hole.

“They’re our potential future scientists and researchers,” McGee said. “We need more girls in science, and this is a way to do that.”

The students’ week was jam-packed with fun activities that focused on learning and leadership. They were in the field on Oct. 31 to study ecosystem communities. Nov. 1 was a trip to Taggart Lake to learn about glacier movements and the effect of wildfires on the landscape. On Nov. 2 the girls worked on field research projects that they then presented to classmates. Their projects covered a variety of topics, including soil types and the relationship between moose and bitterbrush.

“I hadn’t thought a lot about soil until now,” said Sophie Stewart, 13, who focused her research on different types of dirt like clay and loam.

Another classmate, Lucy Harger, 13, explained how the group selected soil samples and chose what to research in order to study how soil changed in different communities.

Then they were tasked with willow restoration in the Spring Creek area as a culminating stewardship project. The grounds had been heavily grazed, allowing erosion. Willow trees are a key component to restoring the land — a conservation easement that is part of Teton Science Schools’ Jackson campus — to the way it used to be or as close to it as possible. The easement, around 770 acres, is near Coyote Canyon, south of Highway 22, and includes Boyles Hill.

Once the students cut 10 willow boughs they gathered important data — the temperature, a brisk minus 2 degrees Celsius, the circumference, the GPS coordinates of where the branch was cut and so on. They lopped off the stems of the trees, cut off extraneous branches and bundled them to be stored over winter. Come spring they will be re-planted.

Leadership and working in teams is just as important, if not more so, than the data skills the girls learned.

McGee said removing the coed aspect of a learning environment can give girls more of an opportunity to speak out.

“It opens up opportunities outside of stereotypical gender roles, stereotypes and expectations,” he said. “It gives them the opportunity to be comfortable in taking leadership roles, speaking up and stepping out.”

Eliza Cope and Jessie Black are graduate students at the Teton Science Schools’ Kelly campus. They made similar observations.

“Even though it’s the 21st century, girls are sadly under-represented in science,” Cope said. “These girls are already amazing and they have everything they need to succeed, but it’s just about getting them excited.”

Cope described the group as curious, enthusiastic and inclusive.

“It’s awesome to see how they’ve bonded,” she said. “This program is a safe place for them to be themselves.”

“Encouraging interest in a male-dominated field is key,” she said. “We’re teaching the kids that anybody can be a scientist. These girls are developing in-depth scientific skills and questions about what they’re seeing.”

Student Zoe Behle, 13, said she’s liked science all of her life but up until recently, was shy and didn’t speak up often.

“I was quiet because I was afraid of being wrong,” Behle said. “This has really helped me learn what kind of leader I am and how to be a better leader.”

“It was super fun to realize how weird and nerdy everyone else was here, just like me,” said Madeline Webb, 13. “We’re all here to nerd out.”

And it’s not just the girls who bond over their love of science and learning — it’s grown women who act as role models.

Every year, McGee said, panelists come to speak to the girls with the hope of inspiring them with “How did you get here?” talks. They range from U.S. Geological Survey ecologists and environmental lawyers to cultural resource officers at Grand Teton National Park and mountaineers.

“We want the girls to see that they can do that, too,” McGee said. “Dream big. Don’t let people tell you no.”