Portraits of Jackson Hole Community School graduates adorn the windows above the commencement ceremony Friday at the Center for the Arts. 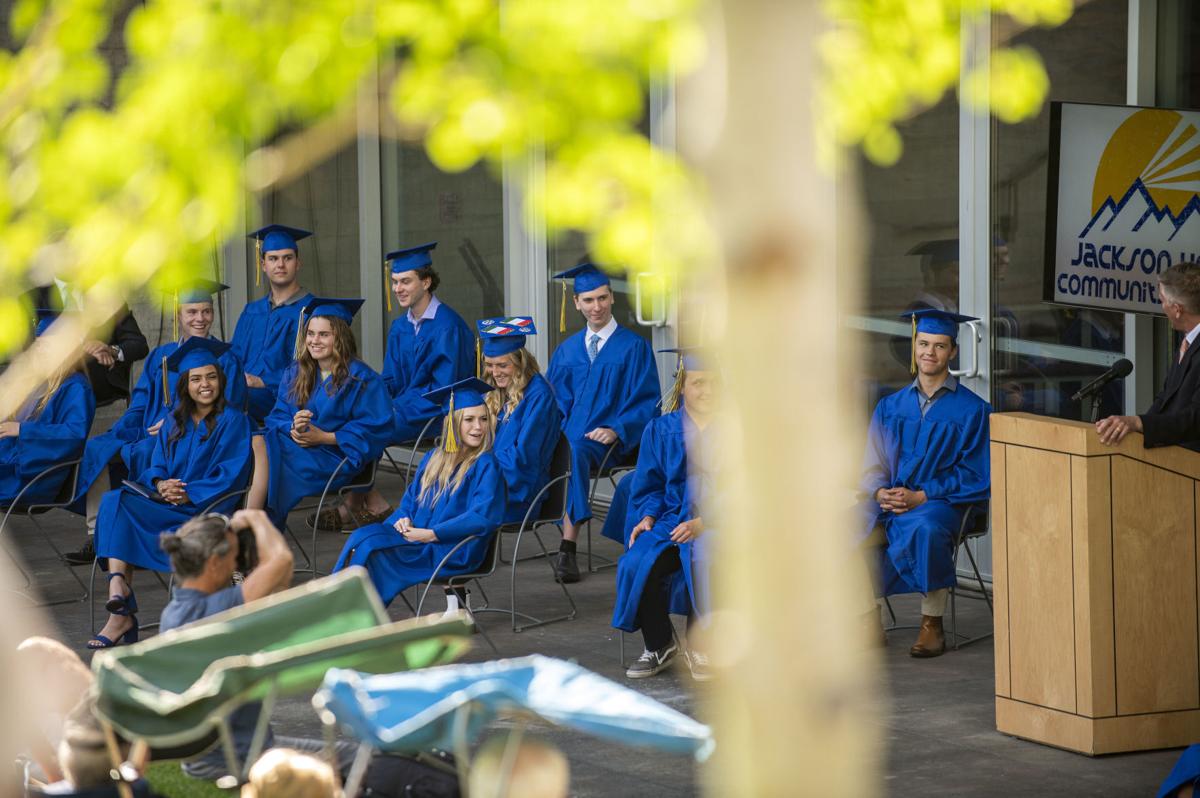 Jackson Hole Community School graduates laugh at remarks by the school’s director of college counseling, David Heinemann, during commencement ceremonies Friday at the Center for the Arts. 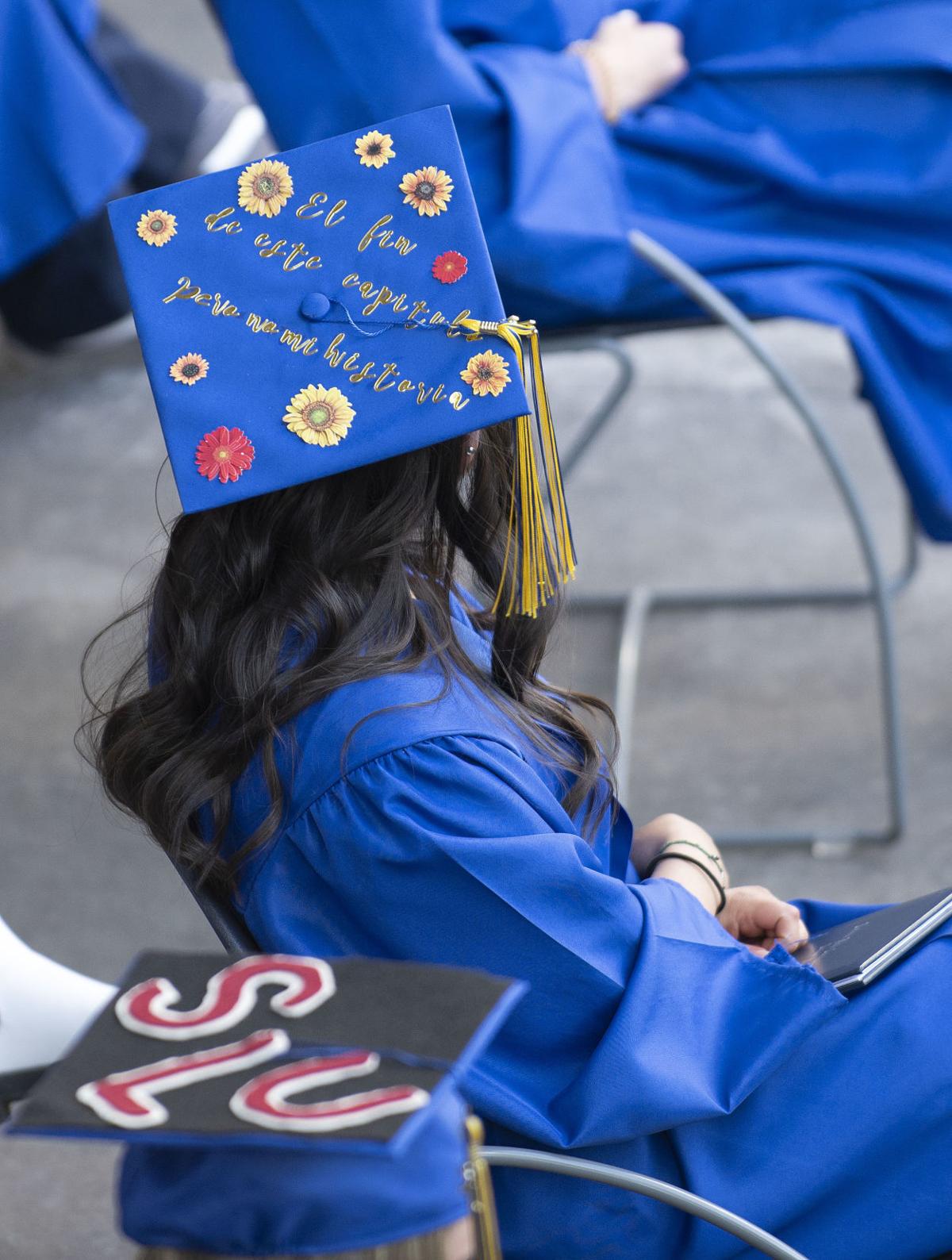 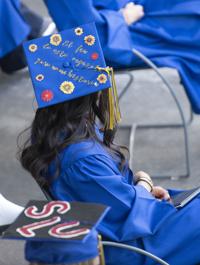 Jackson Hole Community School senior Daniela Garcia wears a decorated mortar board during graduation ceremonies Friday at the Center for the Arts. 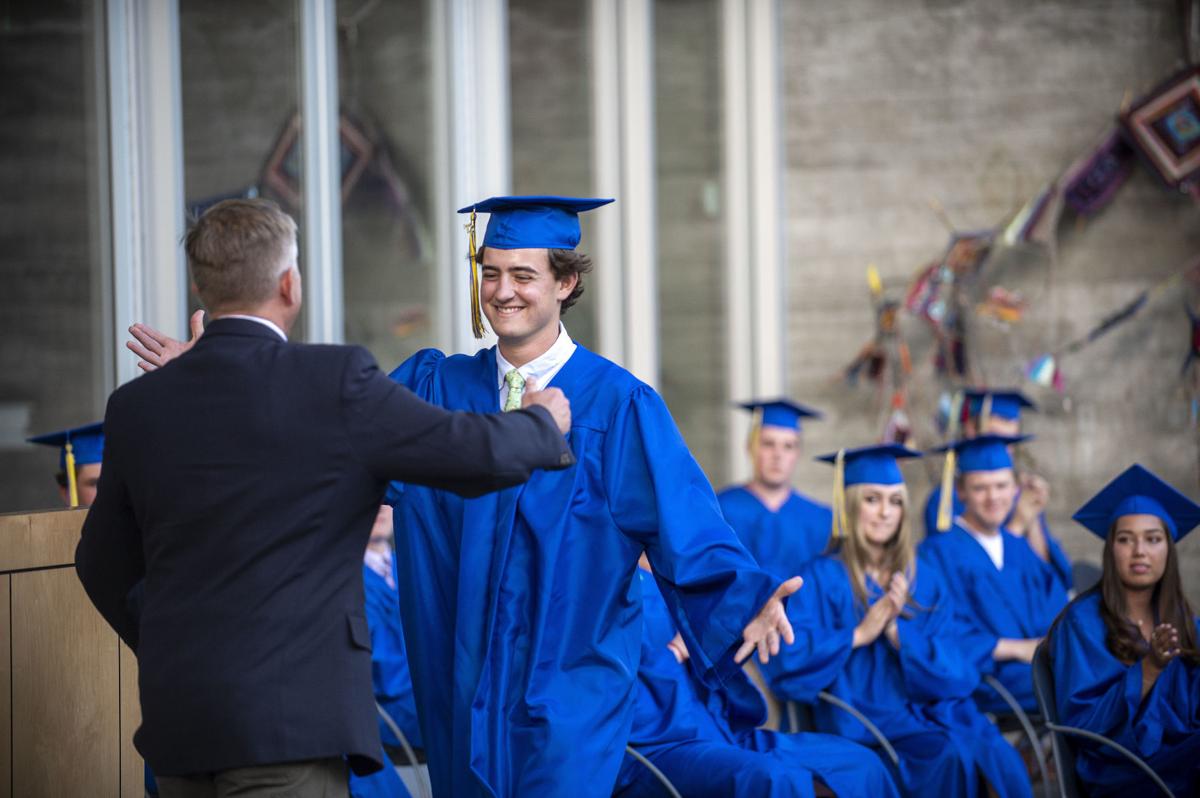 Jackson Hole Community School senior Will Kucera embraces director of college counseling David Heinemann before receiving his diploma Friday evening at the Center for the Arts.

If you were anywhere near the Center for the Arts, you couldn’t miss the Jackson Hole Community School graduation.

Arranged on the lawn were 26 yard signs, each bearing a senior’s smiling face. The same faces hung in the windows above the center’s amphitheater, the homages to the graduates ringing the proceeding.

Families gathered in the grass, lounged in low-slung lawn chairs. Teachers sat on blankets and former graduates gathered to celebrate their friends.

The intimacy of the entire affair was fitting for the small private school.

“Our trajectories will soon all splinter in different directions,” senior Tommy Berner told his peers. “But the family of 26 that has been formed over the last four years will forever have a special place in my heart.”

Berner was the glue that bound the ceremony together, the master of ceremonies. He shouted out classmates, teachers and family, remarking how he felt when his sister graduated four years ago from the Community School.

Those sorts of connections, successive siblings graduating from the school, are common at the Community School, an academically rigorous school with small classes. The setup allows students to become a “family,” as Berner put it.

That helped during the pandemic this past year, which made education in all its forms difficult.

“We’ve kept close and even strengthened our bond over the past year,” Berner said. “I’m incredibly grateful for such a fun, caring group of individuals that I’ve come to love like a family.”

Though nearly all the speakers mentioned the pandemic, it was often only to refer to the lessons the past year has allowed. Most of the ceremony was forward-looking, focused on students’ futures.

Keynote speaker K. Dane Snowden, CEO of the Internet Association, a trade group, talked about the transition students will undergo in the next year. Up until high school graduation, kids’ lives are, in large part, dictated by parents and teachers, even at an institution like the Community School.

College and other post-secondary endeavors are often people’s first forays into adulthood, an opportunity to chart their own courses. That freedom can be overwhelming, but it’s also liberating to become “the CEO of your own life,” Snowden said.

Moving into that phase requires a bit of self-reflection, he said. He left them with a directive to help with that process: Without cellphones or headphones, they should take a 60-minute walk, alone, a sort of meditation on their futures.

“Just you and your thoughts — let your mind wander,” he said. “You’ll be amazed at what you’ll discover when you quiet the outside noise and just allow yourself to be present.”

Perhaps nowhere was the school’s intimacy more evident than during Director of College Counseling David Heinemann’s introductions of the students. Heinemann said he’s worked at the school for 15 years, so he’s seen a fair number of graduates.

Still, it took no time at all for the emotion of the moment to hit him, his voice breaking and pausing as he started into his first speech.

“I know my colleagues up there are going, ‘Really, David, come on, five sentences and you’re already crying,’ ” he said. “And I haven’t even started talking about these guys,” gesturing to the students.

Heinemann described each student, their activities, personalities, struggles and triumphs, going off script several times to discuss a recent faculty-student softball game. His recollections included vivid details that revealed the close connection between students and their teachers at the school, and he greeted the kids with a hug at the end of each oratory.

Afterward, when the students had their degrees and they drifted away with family and friends, the pictures of the graduates still hung in the window of the Center for the Arts, smiling down as one chapter of life ended and another began.