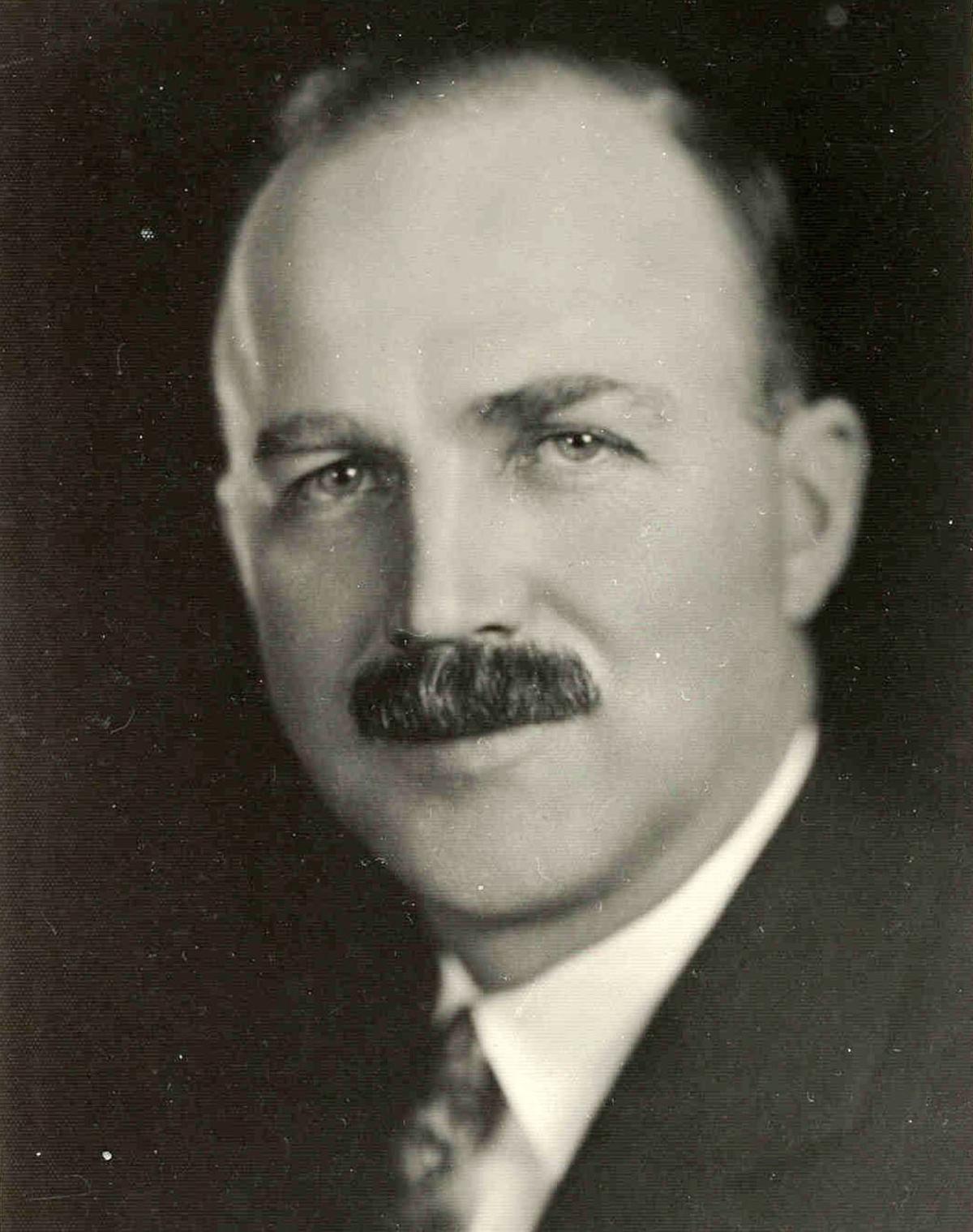 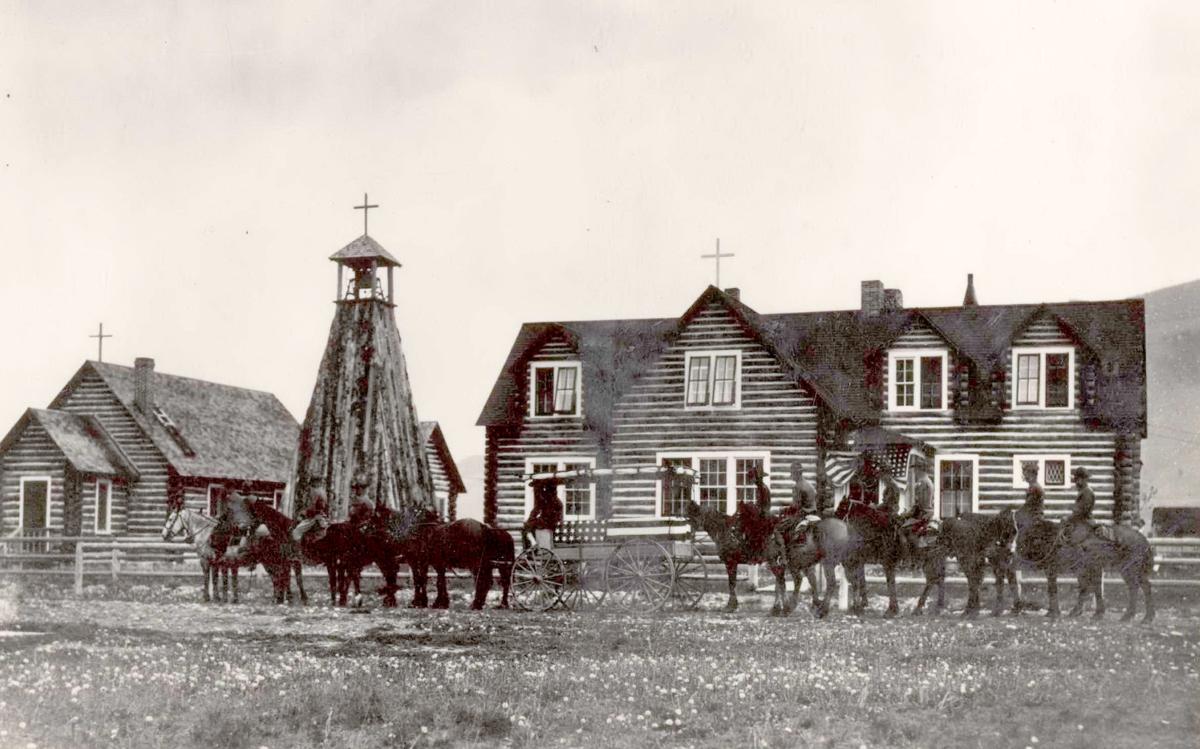 St. John’s church and hospital with flag draped wagon out front. This is the American Legion escort coming from Victor, Idaho, with the body of Curtis Ferrin on June 17, 1921. Curtis was killed overseas in WWI. 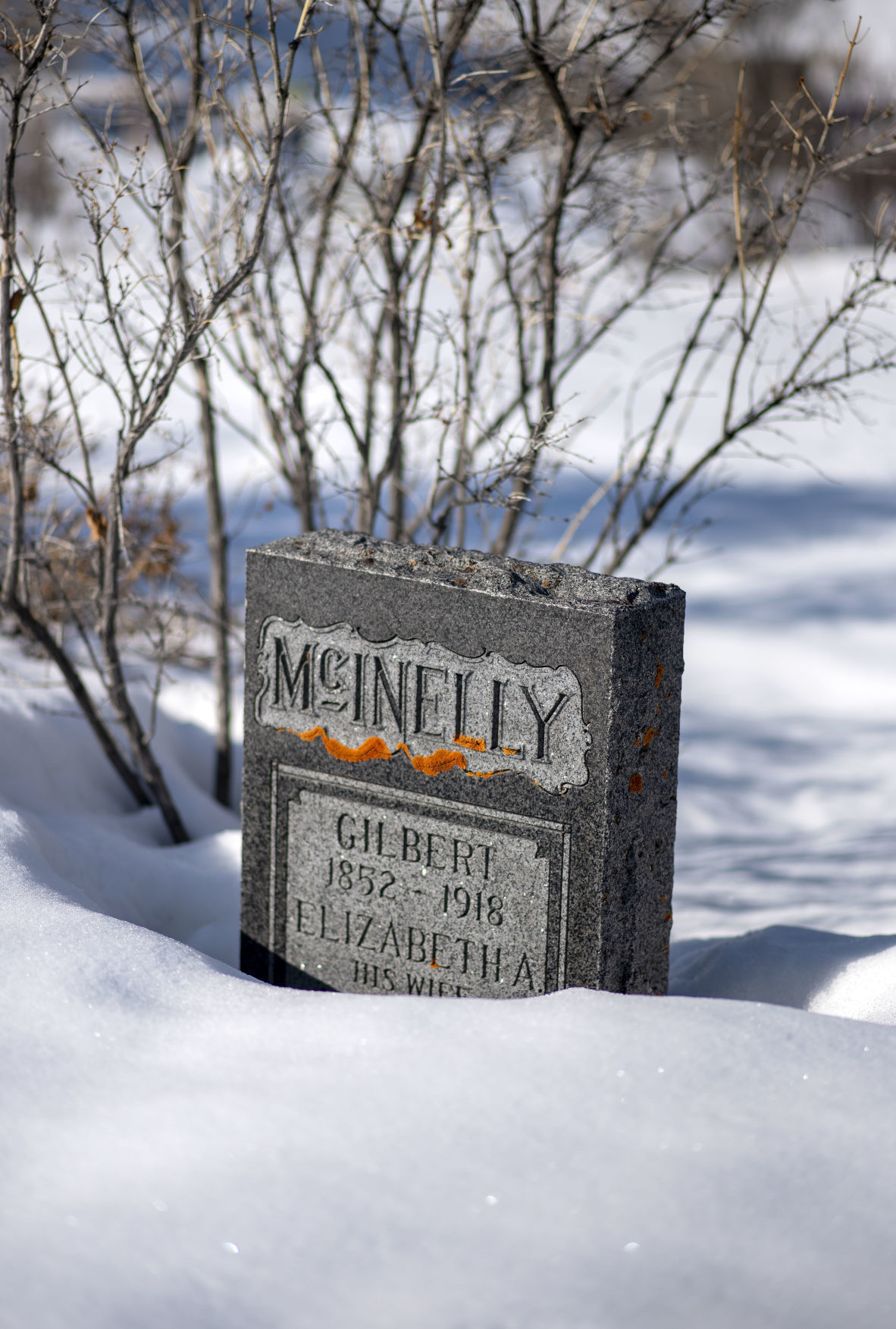 The headstone of Jackson resident Gilbert McInelly at Aspen Hill Cemetery. McInelly was a victim of the 1918 flu pandemic, his obituary stating he “was unable to overcome the attack of pneumonia which followed his illness with influenza.”

The Dec. 26, 1918, edition of the Jackson’s Hole Courier came out late because editor Dick Winger was sickened as the local toll mounted.

The only doctor in Jackson Hole ran himself from one end of the valley to the other, from South Park to Wilson and then as far north as Moran, going to where the sick lay in bed, sometimes whole families.

Then, after weeks, at the height of the sickness that was stalking Jackson, he himself was struck near the end of December, when the epidemic was at its worst.

But the work of Dr. Charles Huff wasn’t the only thing being done as the influenza epidemic of 1918 hit Jackson, late in the course of the plague that had begun taking its toll around the country weeks before it arrived in remote northwest Wyoming.

The people who ran Jackson in 1918 hadn’t wasted time. They’d heard about the disease’s effects around the country, had been warned by the government. So when the Spanish influenza found the valley, in the first week that cases were recognized, they imposed rules designed to stop the invading pestilence.

After all, the Jackson’s Hole Courier reported on Oct. 17, the flu was “traveling through the country like wild fire, and the community is rare where it has not put in its appearance.”

The reaction in Jackson then mirrors that of the current coronavirus situation. It began with news of illness in places far away, then a few cases closer. Then the first cases actually were diagnosed in Jackson, then the flu slowly spread for six or seven weeks — then exploded for about two weeks before abating just as suddenly.

In 1918 schools in Jackson were closed and parents were “warned to keep their children at home and off the streets,” the Courier reported. “Public gatherings of every kind are barred.”

It wasn’t just schoolkids who were affected: The newspaper, the town’s only media, reported that “chairs and tables were to be removed from all places of amusement and from all hotel lobbies and signs are to be placed there warning the public to keep moving.”

The town fathers ordered that no one could enter Jackson “from infected territories, including Idaho and the Star Valley country.”

Tressie Royer returned to Jackson after her school in Utah was closed and was put in quarantine. Also quarantined was Loletta Thomas, who had arrived as the new school teacher in Kelly.

When people died their mourners couldn’t forget what had killed their friends and family: Pvt. George Edward McKenzie, 28, died Oct. 17 at Fort Riley in Kansas and was shipped home for his funeral, held in a front yard in Wilson; 28-year-old Pvt. John Smeykal, of Elk, came home dead from Fort Bliss, Texas, and “on account of the quarantine existing in town” his funeral was “held in the open air,” the Courier reported.

In another issue early in the epidemic the Courier reported that there was flu in Driggs and Victor, Idaho, and in all the towns between them and Idaho Falls, with “no passengers being permitted to leave the train at those places.”

The Oct. 31 Courier included the first published report of flu among Jackson residents. A few miles south of town it hit “Mr. and Mrs. Nate Davis” at their ranch. They hadn’t left their spread for some time and had welcomed no infected visitors, so the paper reported the suspicion that the influenza “was contracted through the mails.”

Next to the story about the Davises the paper reported the flu death of Lloyd Reed, a local boy serving in the Army in Indiana.

The calm reports of cases around the area — many in South Park and another outbreak at the Fox Sawmill near Wilson — changed quickly, though, by Dec. 26. In the paper of that date the Courier ran a front page headline that said, “Whole Families are Down — Business at a Standstill — Disease Rapidly Spreading.”

Mentioning the recent “scattering” of cases around Jackson Hole, the Courier said that “not until the last week did the disease become really epidemic in this locality.”

“Its spread within that time has been almost astounding,” editor Richard Winger wrote. “Apparently every section of the valley is now affected and it is safe to say that 15 percent of the population has been stricken with the malady.” Though most people were recovering, not all had the strength to fight off the viral attack, Winger wrote.

The Courier reported names of more than 90 people who were were hit by flu, often appending the phrase “and family” or “and children.”

Some local merchants ran ads that displayed just their names and the word “closed.”

Dr. Huff “was kept constantly on the go” until he was sickened himself the week before Christmas. He called the state for help but didn’t immediately receive any reply. St. John’s Hospital “had a stream of incoming and outgoing patients,” the paper reported, and the chief nurse was sickened by the flu. She was replaced by Dr.Huff’s wife for several days until she caught the disease herself.

“In many cases whole families are sick,” editor Winger wrote, “and are dependent upon their neighbors for their needs, and especially on those ranches where none are well enough to do the chores, is neighborly assistance necessary.”

But even those reports were overtaken by events: Winger apologized in a front page box in that issue for the fact that the paper was “several days late due to the illness of the editor-printer,” and noting that the outbreak was at its height.

“We have tried to present the flu situation as it is, but find that, in the last few hours, it has spread entirely beyond the bounds outlined in our other columns, and that probably 50 percent of the population of the valley has been affected.”

Winger added four deaths: “A.B. Cole, at St. John’s hospital; Mrs. Walter Scott, at her ranch home in Dry Hollow; the infant child of Mr. and Mrs. Frank Peterson, north of town; and Hyrum W. Deloney, a prominent businessman of Jackson.” In his next paper, on Jan. 2, he added Myrtle Losier, of Elk; Carl Wright, at his ranch near Kelly; Ireta Seaton, at St. John’s Hospital; and James E. Wilson, at his home south of Jackson.

“Each death has brought infinite sadness, and the fearful toll of lives brings a sense of overwhelming loss to the community,” editor Winger wrote.

Though noting three deaths in the previous few days — and about 11 in about two weeks — the Courier said in its Jan. 9, 1919, issue that “the situation is thought to be much improved.” That paper also reported the arrival of Dr. W. Ackley, from Ashton, Idaho, two nurses from Utah and two male medical attendants, the first outside help to reach the valley.

That paper also reported the death of Roy McBride, 52, an 1896 settler, rancher of 1,200 acres in South Park and a guide for tourists and hunters, a man “always genial and hospitable, a good neighbor and friend.”

“When the influenza epidemic first came to Jackson he gave almost his entire time and the constant use of his car toward the alleviation of the ills of neighbors and friends until he, too, was stricken.”

There’s apparently no official count of deaths in Jackson, then part of Lincoln County. Estimates of Wyoming deaths put the toll at about 780 of a population of 131,000.

Estimates put the worldwide death total at no less than 50 million and perhaps as high as 100 million. The number of deaths in the United States was put at 675,000.

Dr. Ackley — the man who came from Ashton to help — was “more than 70 years of age,” the Courier wrote when he left town in mid-January. A doctor for 41 years in Kansas, he had traveled to Idaho to gather the body of his doctor son, who had died of influenza. Finding the situation in Ashton so bad, the Courier said, he shipped the body home and stayed to help.

“When he learned of the spread of the disease in this valley,” editor Winger wrote, “the same spirit of helpfulness promoted him to tender his services here.”

Dr. Ackley decided to resume his trip home when Dr. Huff began to feel better, and because, the Courier said, “Dr. Ackley has not been very well for several days.”

Wonderful little vignette from a past time, and how Jackson got better. Even if separated by more than 100 years, it is heartening to hear about the valiant efforts made.