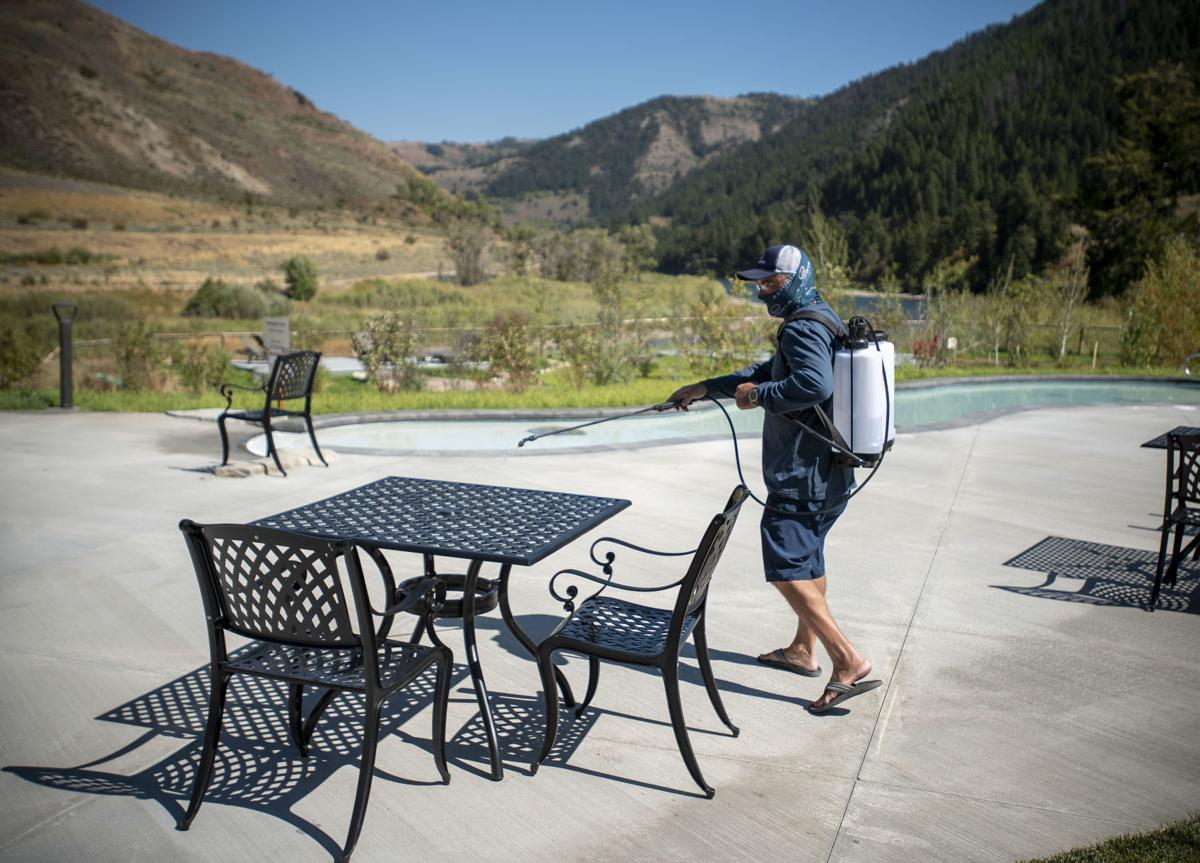 Astoria Hot Springs General Manager Ian Curry sprays down patio furniture and deck chairs with a high-alcohol mixture between each 2 1/2-hour time slot for soaking to mitigate the spread of the novel coronavirus. 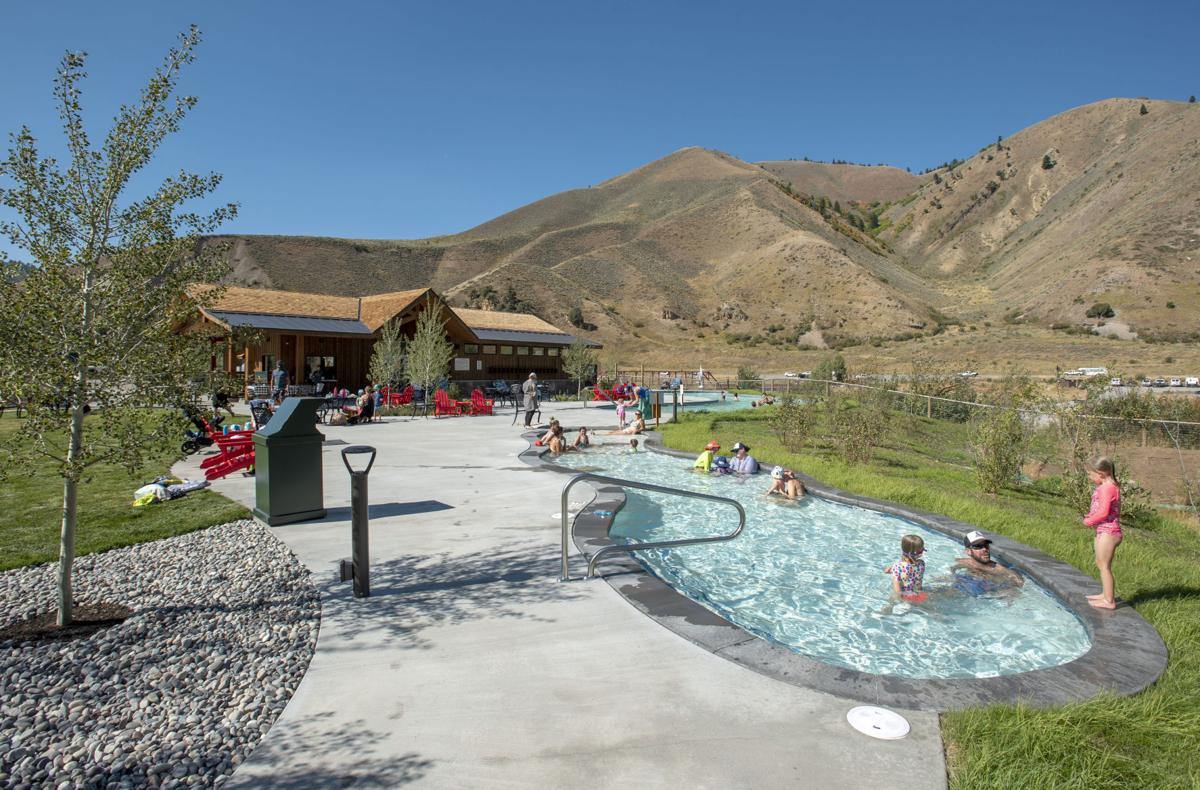 Soakers enjoy hot spring pools at Astoria on Friday for the first time in 22 years. The original pools, completed in 1961, were forced to close in 1998 when upkeep of the aging park became financially unfeasable. 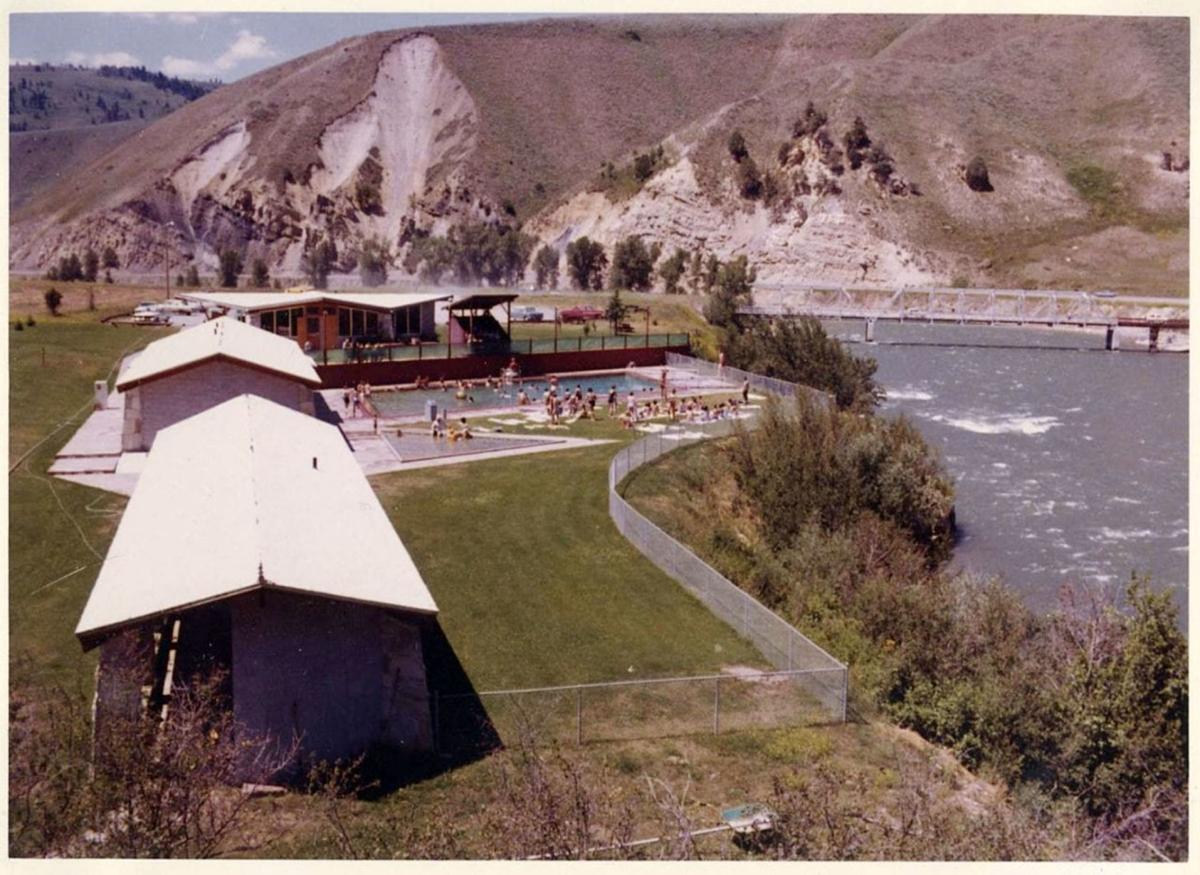 Robert Porter bought the Astoria land in 1960 and started a project to build structured pools, which were completed the following year and soon became a treasured gathering space for the community. For swimming there was a 40-by-80-foot pool, from 2 to 8 feet deep, and a smaller, adjacent pool for wading and soaking. The Gill family, who had cared for and owned the park since its establishment, was forced to sell in 1998 when the park became unfeasible to sustain financially.

After more than six years of planning and fundraising and a year and a half of construction, the warm pools of Astoria Hot Springs opened to the public Friday southwest of Hoback.

The 70 area residents allowed in the gates of Astoria Hot Springs at any given time during its opening weekend enjoyed the complex in a number of ways.

Some sunbathed on a private deck overlooking the Snake River. One read a paperback while soaking. A middle schooler turned cartwheels in the children’s pool. Younger girls donned goggles and explored underwater in the main pool. Many adults submerged themselves and chatted with family or friends. Others lined up at the snack shack and then refueled on the picnic tables or lawn.

The reviews that flooded in from users on Friday afternoon were overwhelmingly positive. Especially in the, ahem, dumpster fire of a year that 2020 has been, people agreed that we needed the return of this storied and healing gathering place. Badly.

Mikey Franco, soaking in the River Pool with his wife, Jen, was all smiles.

“You couldn’t have done a better job for your first opening day,” Franco said. “It’s perfect.”

First developed as a commercial swimming pool by Robert Porter starting in 1960, the hot springs operated until 1998, when the Gill family sold it. A movement began in 2012 to purchase the land and reopen it to the public. The Trust for Public Land spent around $1 million plus almost eight years of its staff time on the project. The land was conveyed in January to the Astoria Park Conservancy, which developed and will operate the space.

“It’s a tremendous gift they were able to bring this back,” Jennifer Overcast said. “And a huge upgrade.”

“It’s the thing the valley needed for 30 years,” he said. “I’ve been waiting for this since the day it closed.”

Kelley Web and her son Rye, 15, dangled her feet in the 106-degree River Pool, enjoying the sunny September weather.

Because of the coronavirus pandemic, Astoria officials have limited the number of users to 70 during three 2 1/2-hour time slots each day, as well as limiting attendance to local residents. Half-an-hour breaks between soaking sessions allow the constantly circulating water to be refreshed in each pool.

“I was really pleased with how much social distancing was possible,” Curry said. “Even when we were totally full, there was never a moment when we felt overcrowded. The separate pools helps with that, it allows people to spread out a little bit.”

On Monday Curry reported that weekday attendance was lighter than the opening weekend.

Even on Friday most of the time there were relatively few people in each of the five pools at once.

In the midlevel Meadow Pool, Beth McCoy, of Wilson, relaxed with her husband, Greg. They never experienced the old hot springs, but loved the summertime shortcut of cruising down the steep, somewhat rough gravel Fall Creek Road for a getaway.

Brantley Sydnor applauded the landscape design of the complex: “I enjoy the flowing water, the cascading streams, the layout, the tiered levels.”

Attendees enter through the welcome building, which has a snack shack and gate on one side and restrooms and showers on the other.

About midafternoon on Friday, Nancy Shea watched childrens’ shenanigans in the 100-degree Leisure Pool with a smile.

“You know I had to be here opening day,” Shea said. “I taught my little one to swim in the original.”

Edie Jay, 8, floated behind her father, Chris Jay, latched onto his back “like a Klingon,” as he termed it.

“The only thing I would like is a cold pool,” Edie said.

“Or,” her father said, “I could just get a bucket of cold water and pour it over your head.”

Jay supervised Edie and her best friend, Liv Bosch, also 8, and said they had a grand day.

“It’s super fantastic,” Jay said. “We are psyched on it.”

The project was funded, soaker Serese Kudar pointed out, entirely by donations.

Until the end of 2020 donations over $100 will be doubled by two anonymous donors and the nonprofit’s board of directors. The money will fund improvements and a program to pay the way for those who can’t afford the usual admission: $14 for an adult and $10 a child.

A cold plunge was discussed but not funded in the first phase of construction. Curry said she’s working to figure out how much it would cost to install another pool, and how to fund it.

Planning and fundraising for the next phase of the park will take the next couple of years, Curry said, including development of more amenities on the acreage within the 100-acre park.

She’s also working to partner with a high school chemistry class or St. John’s Health to analyze the mineral content of the spring water and produce a brochure that details the health benefits of them.

Visit AstoriaHotSpringsPark.org for information and reservations.