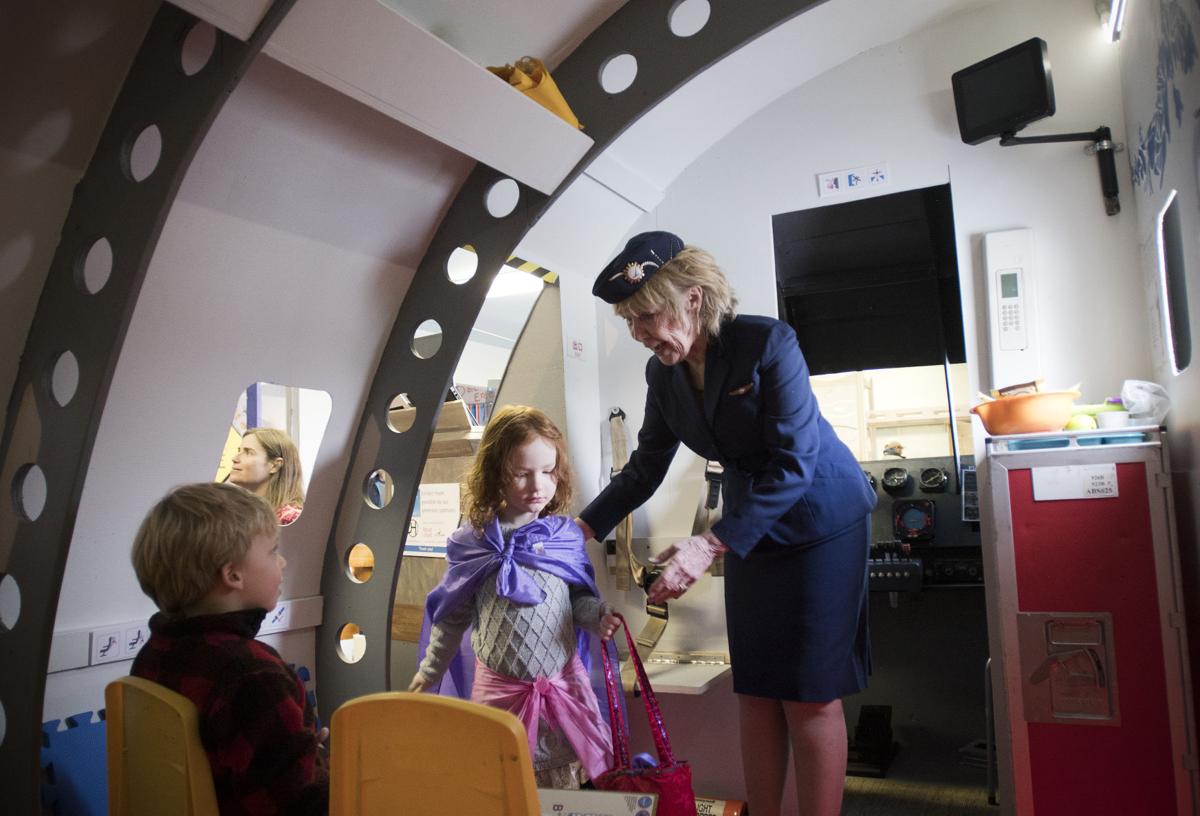 Jackson Hole Children’s Museum volunteer GG Patterson welcomes kids into the new “Taking Flight” aviation exhibit. Patterson was sporting the uniform she was issued when she worked as a flight attendant for Eastern Airlines in early 1960s. 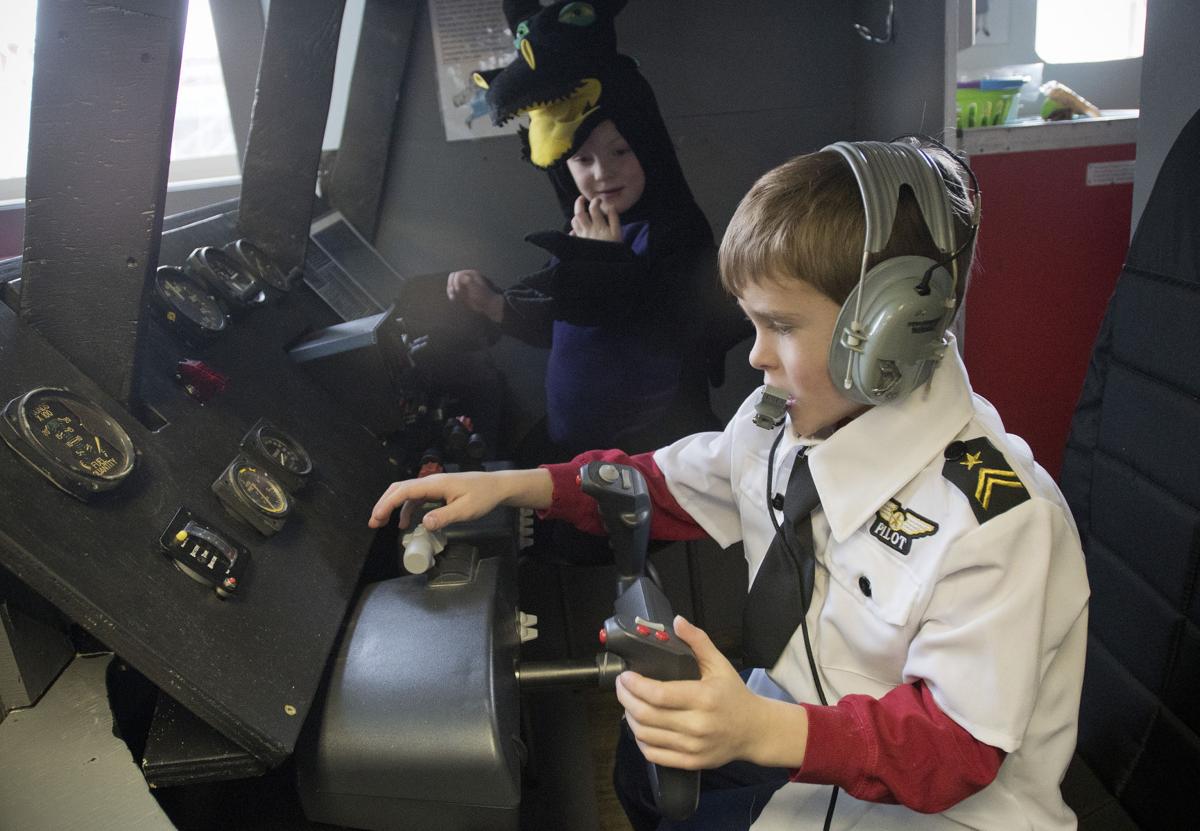 Blake Genzer, 5, right, mans the controls in the cockpit. The exhibit allows children to role-play airport jobs and get acquainted with planes.

Jackson Hole Children’s Museum volunteer GG Patterson welcomes kids into the new “Taking Flight” aviation exhibit. Patterson was sporting the uniform she was issued when she worked as a flight attendant for Eastern Airlines in early 1960s.

Blake Genzer, 5, right, mans the controls in the cockpit. The exhibit allows children to role-play airport jobs and get acquainted with planes.

Imagine you’ve never been to an airport — or you’re afraid of flying.

Acquainting yourself with the ins and outs of planes as a child might help.

“Sometimes flying can be nerve-racking or scary because it’s different,” Jackson Hole Children’s Museum Director Jean Lewis said. “This is a place where kids can be comfortable in a life setting.”

Last week the museum debuted a new exhibit, “Taking Flight,” to a crowd of over 85 people. It’s now open with the rest of the museum from 10 a.m. to 3 p.m. Monday through Thursday and Sunday and 10 a.m. to 5 p.m. Friday. The museum is closed Saturdays.

“It was a huge success,” said Julie D’Amours, the museum’s director of education. “It was really fun, and we had a great turnout of children and families who absolutely loved it.”

Kids really got into character.

“We had all of these kids dressed in pilot and flight attendant costumes,” D’Amours said. “They were so cute.”

“Taking Flight” is the newest iteration of a rotating exhibit highlighting Jackson jobs and prominent industries in the community. A previous exhibit focused on the St. John’s Medical Center, doctors and the emergency room, while others have included Jackson Hole Mountain Resort and a rafting and river sports space.

The airport exhibit has been a long time coming.

Working with Jackson Hole Airport’s board of trustees helped make the exhibit come to fruition.

She said they “didn’t even waver” and were “very enthusiastic” when presented with the idea.

The partnership allowed the museum to get specific items for the exhibit and get a tour of the control tower at the airport to figure out which interactive pieces to duplicate. The airport also provided the museum with props and tools, like ground crew supplies, Transportation Security Agency baskets and baggage tags.

The exhibit hopes to highlight unique pieces from the airport, including details down to signage, seats donated by SkyWest Airlines and flight attendant food carts.

Inquiry-based learning is key for the museum. Little visitors can pretend to work at an airport, make objects fly and imagine what views look like from above.

“Children can role-play all of the airport jobs,” D’Amours said. That role-play, she said, could eliminate anxieties about planes.

“There’s fear around it, but we want them to be excited,” she said.

An instructional yoke, like the ones pilots pull up and push down on while flying planes, a donated control panel and more help simulate what it’s like in a plane.

“Seeing how the kids use it is really cool,” Lewis said.

Longtime museum volunteer and former flight attendant GG Patterson helped make the scenario more realistic by dressing up in uniform, making announcements over the intercom and passing out pretzels.

“She was really the highlight of the day,” Lewis said.

It’s all up in the air — pun intended — and all up to be shaped by kids’ imagination.

D’Amours said that during the opening weekend the luggage area — where children can put suitcases into the back of the plane and then slide down a ramp — was “really popular.”

“There were also a lot of kids playing in the control tower with headsets on,” she said.

KJ Morris, the local architect behind Shelter Designs, was the design brain for the exhibit and, according to Lewis, “really is the reason these exhibits are so unique.”

Scott Lacey, a local mechanical engineer who also designs theater sets for Off Square Theatre Company, helped with the engineering. Components were built at the theater before they were moved to the museum.

“It really is a community collaboration, and it took support from the community to make it happen,” D’Amours said.

Other sponsors, partners and donors include Mead and Hunt, a national engineering and architecture firm that worked to incorporate a sound component to the exhibit, Fly Jackson Hole, Teton Aviation in Driggs, Idaho, and Precision Aircraft in Denver.

The museum is looking forward to bringing the concept of flight to other parts of the museum, like the “Tot Spot” geared for toddlers, and integrating the popular theme across exhibits and ages. The museum’s Colter Club after-school program “Motion Commotion” is focusing on things that fly and studying flight.

A highlight that’s bound to be loved and looked forward to? Kids can design, build and decorate flying machines and send them zooming across the museum on a zip line.