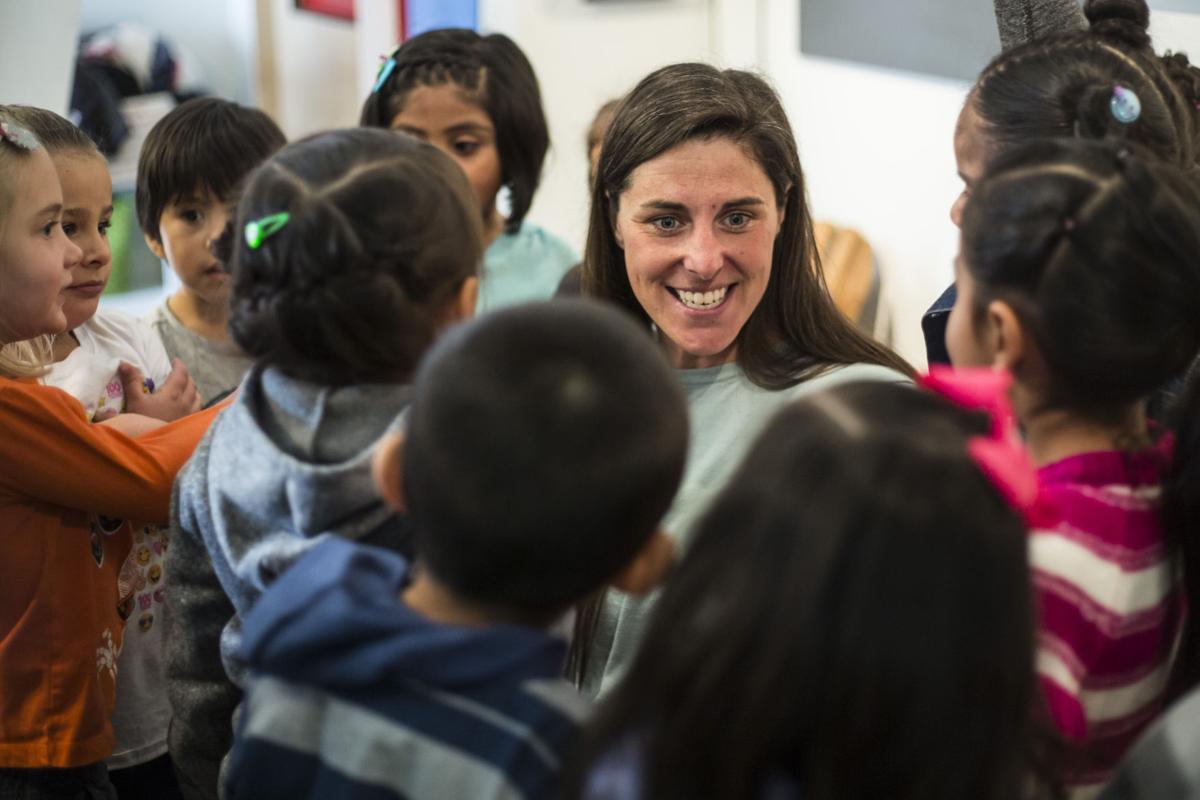 Sara Lashbrook of the Jackson Hole Children’s Museum welcomes kids from the Teton Literacy Center. The two organizations partnered on a pilot program that allows preschoolers to explore and learn the way they want to. 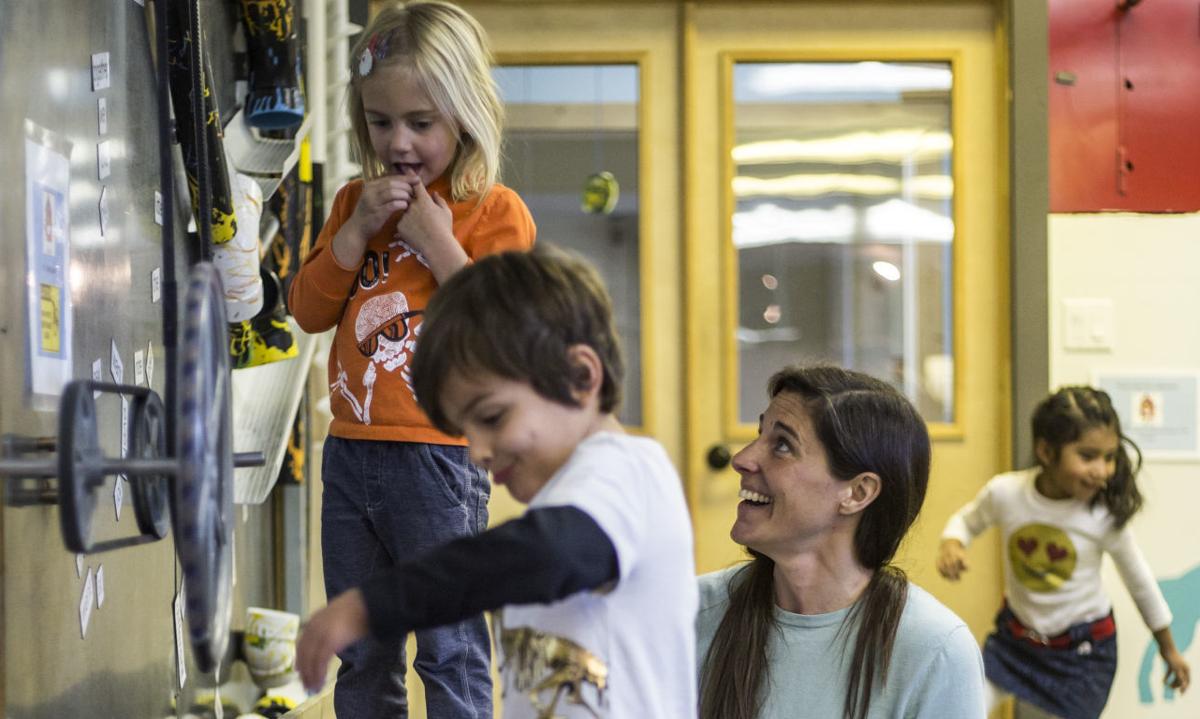 The Jackson Hole Children’s Museum, Teton County/Jackson Parks and Recreation and other organizations partner to provide after-school care for kids. 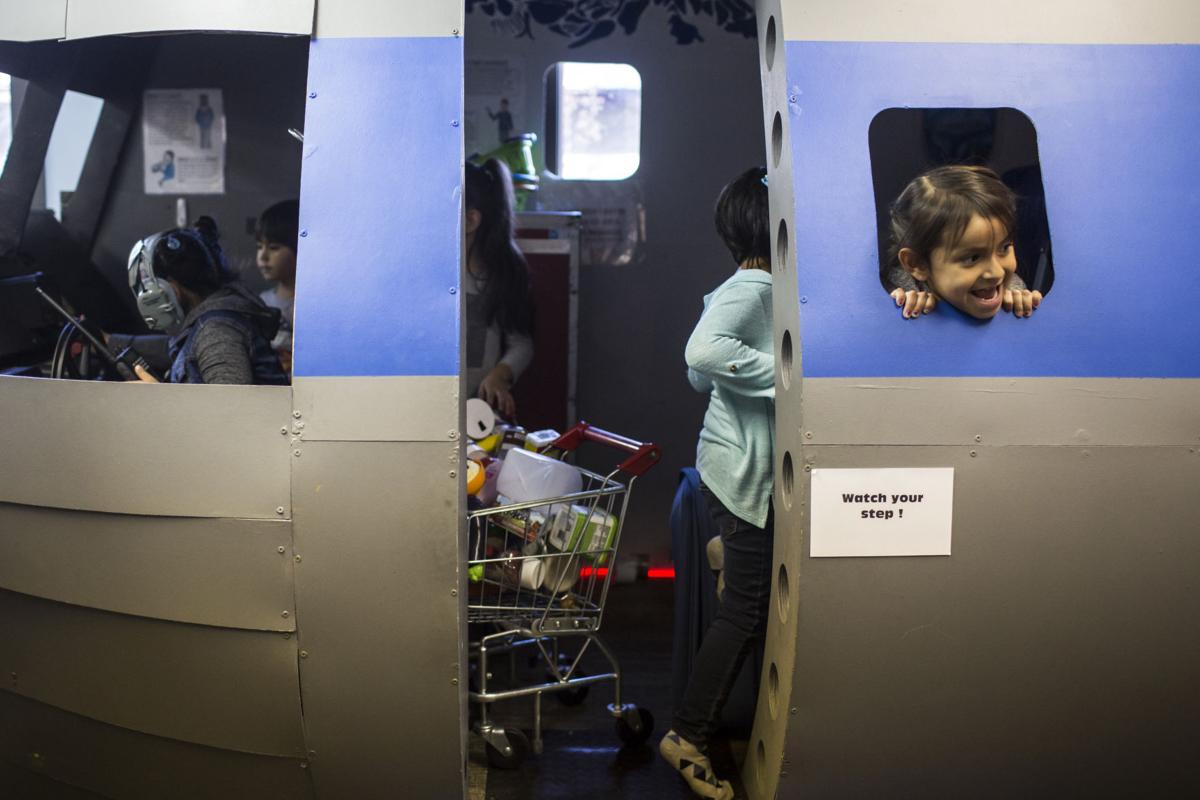 Sara Lashbrook of the Jackson Hole Children’s Museum welcomes kids from the Teton Literacy Center. The two organizations partnered on a pilot program that allows preschoolers to explore and learn the way they want to.

The Jackson Hole Children’s Museum, Teton County/Jackson Parks and Recreation and other organizations partner to provide after-school care for kids.

It was the most productive kind of pandemonium.

Preschoolers played with food color, observed pinecones under a microscope and mixed cornstarch with water. The teachers, normally tasked with creating cohesion out of organized chaos, stood in the background, observing.

The preschool pilot program, a collaboration between the Jackson Hole Children’s Museum and the Teton Literacy Center’s Lit Lab, started with the idea that when children are left to explore on their own, they create possibilities that adults overlook.

“The nature of how it unfolds is so different from what we can offer in the classroom,” said Kate Roberts, early literacy coordinator at the Teton Literacy Center. “It’s able to resonate in a really cool way with students that may not succeed in the structured classroom environment.”

The partnership began in the fall of 2016 and continued this school year thanks to a grant from the Center of Wonder and collaboration between the two institutions, starting with Lit Lab teachers Fio Lazarte and Elyse Kennedy. The project will continue if funding can be secured.

Childhood educators know that kids learn when they’re interested. To discover what intrigues them, educators have learned to take a step back.

“For me it’s easy to walk into a room and think, ‘Well, what do you want me to do with this?’” Roberts said. “But they’re like, ‘I want to touch it all!’ That’s exactly how they learn. Setting up the space as an invitation is really all the instruction they need. They do what’s best for them to take in the information that is there for them to get.”

Roberts and others following a similar model say they offer encouragement and suggestions for children to approach the materials with learning goals and outcomes in mind. But educators stop short of defining the steps to get there.

“You really have to give a kid a jumping-off point and the right scaffolding and structure to get out of it all they can,” Roberts said. “But in the end it’s their intrinsic motivations and their learning desires that are going to get them there.”

As the children settled into their stations they became focused. A hush fell over the Children’s Museum as they drew bull elk, pieced together magnets and observed Speedy the Frog.

Throughout the pilot she has observed the students, taken notes and photographs and recorded voice memos during free play and science time. She looks for patterns and trends to create a program tailored to their needs and interests. The observations are detailed, with quotes from students by name as they ponder, muse and interact with their peers.

The children don’t seem to notice. They’re too busy playing, quickly changing activities as the groups move from station to station in the museum. One minute they’re mimicking grocery shopping. The next they’re flying a plane.

As children played with blue sand or fly bits of paper above a fan, she asked, “What do you notice?”

When adults slow down and listen, she said, kids feel an importance, a sense their thoughts are valued.

Lashbrook’s own work process, one driven by what she calls an “inquiry stance,” focuses on open-ended questions. She wants children to think critically and explore for themselves.

Laura Soltau, executive director of the Teton Literacy Center, said flipping the educational model on its head can be equally challenging and rewarding for teachers.

“A lot of times that’s the hardest thing to let go of,” she said. “Student-directed learning is really valuable but not a traditional way of going about education.”

Soltau said the payoff is “really understanding what a student gravitates toward” and “giving our teachers the opportunity to understand their students’ curiosity.”

The exercise turns notions of who can be the teacher, and who can learn from whom, upside down. Assumptions of what kids might do with materials can clash with the reality of how they use the tools they’re provided.

“We’re moving away from the ‘teach in front of a room’ approach,” she said.

AmeriCorps volunteer Sami Wolniakowski said the traditional approach didn’t work for her. She volunteers for the Teton Literacy Center and said the flexible model of learning seems to benefit the students.

“This is the kind of teaching I want to do,” she said.

Previously, Wolniakowski taught in Wisconsin public schools. She described them as having a “crazy structure” where she’d “watch students fail” because they couldn’t stray from a rigid lesson plan or definition of success.

Sitting cross-legged and talking only when called upon, she thought, is a way of the past. Letting children explore and learn to take turns in a conversation is more important for the real world.

Roberts said that isn’t how she wants her students to approach school either. The structure of the pilot program gives them ownership over their learning.

“It teaches them how to learn, as opposed to learning that school is a place where you sit and you listen and you do all the steps in order,” she said. “Instead, it’s a place where you see something, touch it, throw it, break it, see what’s inside and figure out what you need to put it back together.”