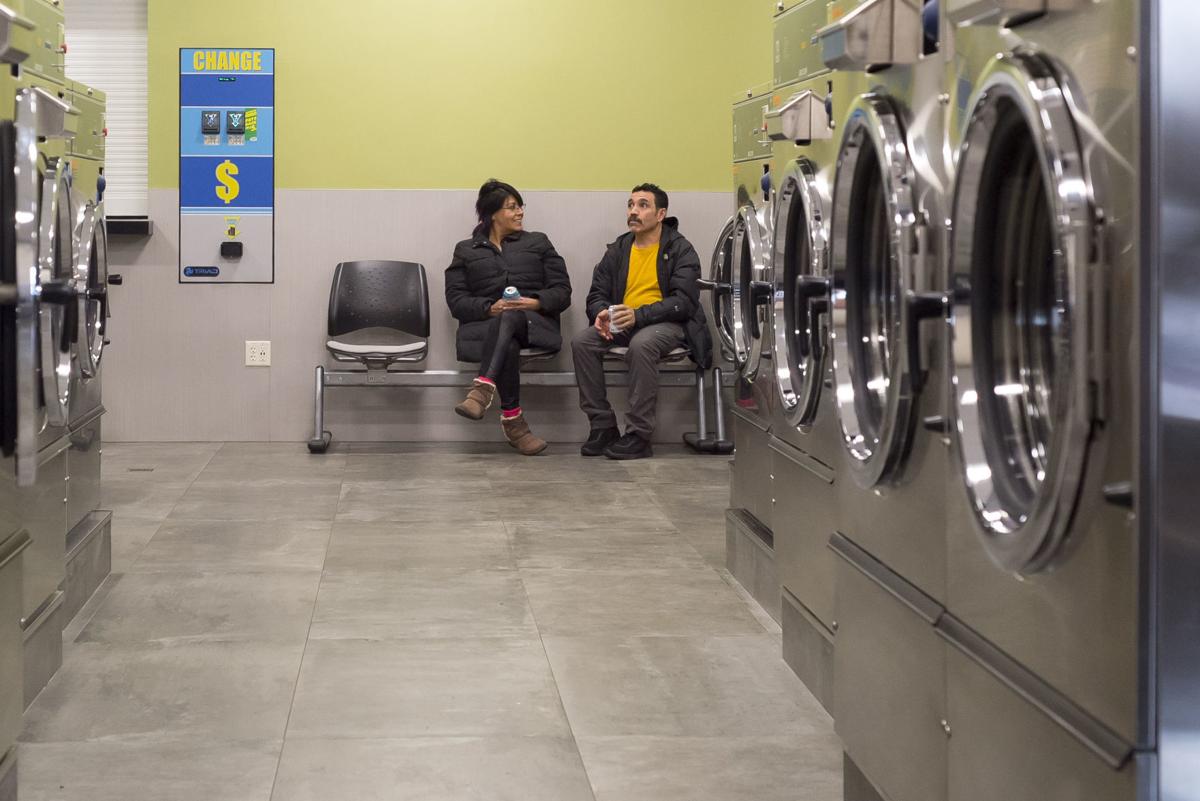 Lara and Luis Garcia wait for their machines to complete their cycles at Jackson Laundromat. St. John’s Episcopal Church’s Laundry Love is an initiative that pays for washing and drying from 5:30 to 7 p.m. the second Thursday of the month. 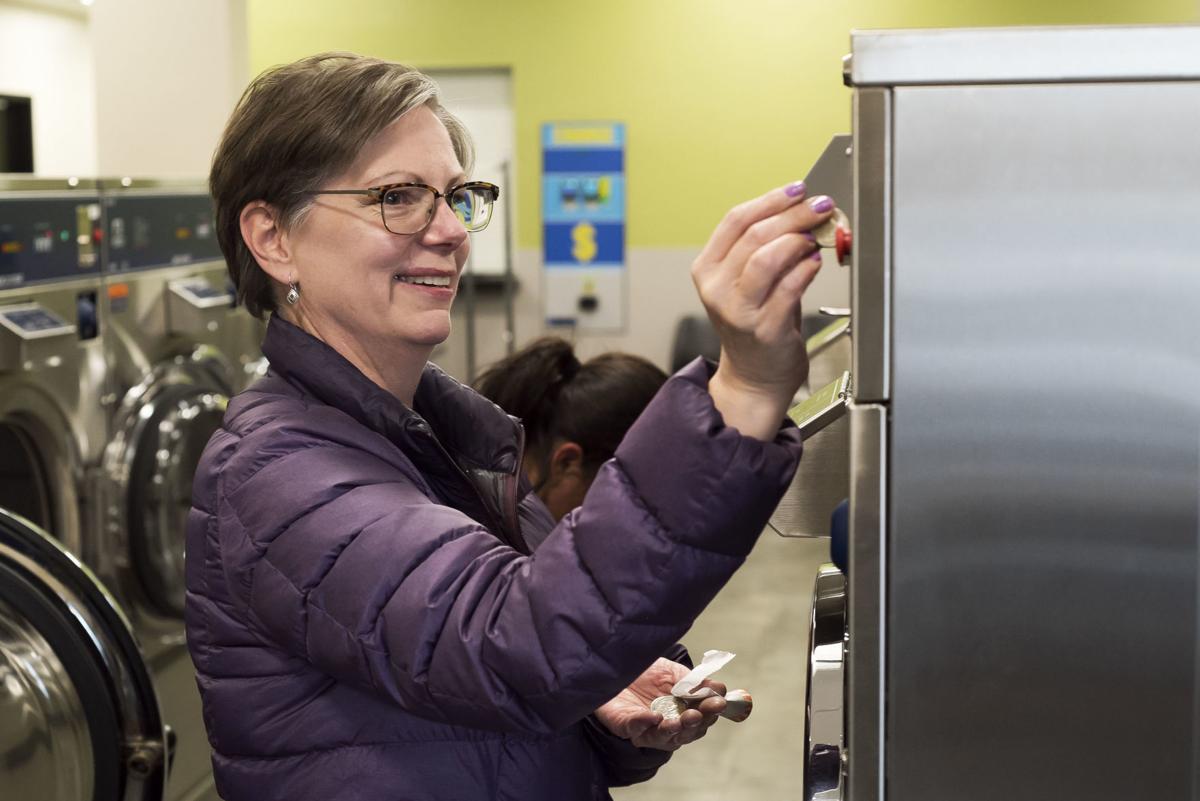 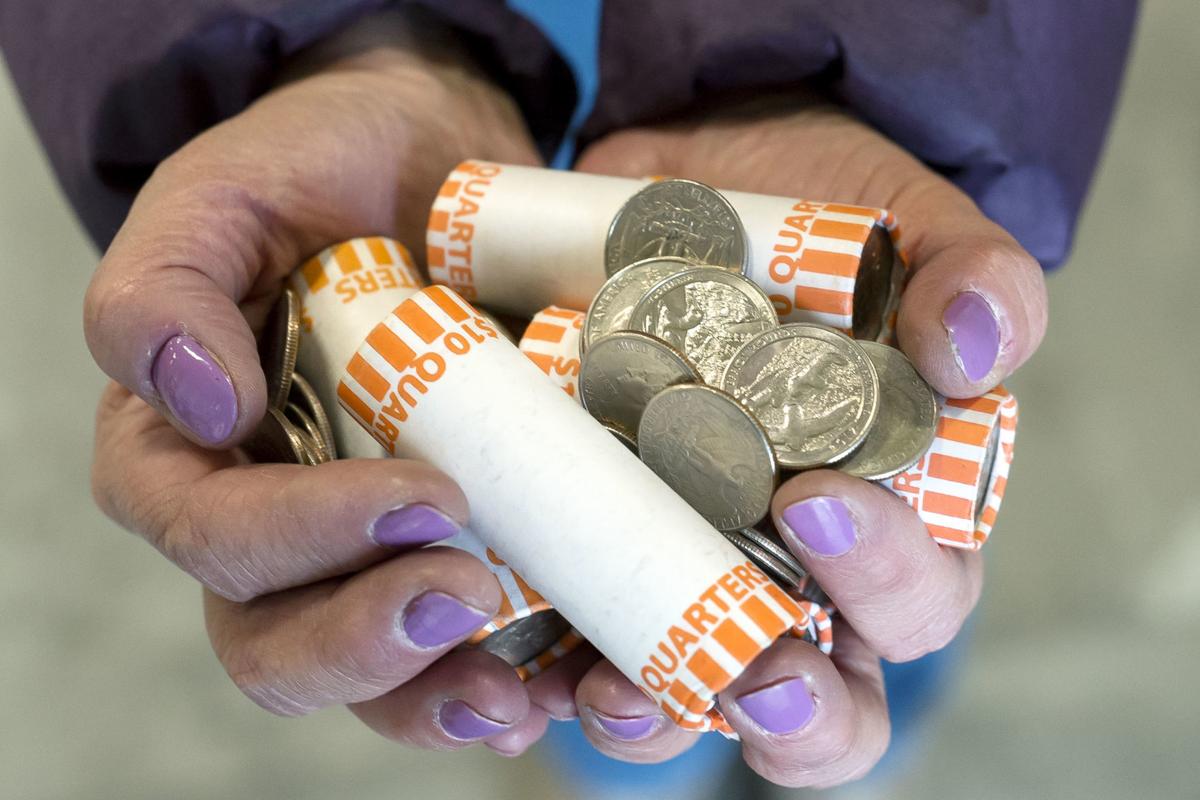 Annie Sampson holds a small portion of the hundreds of dollars in quarters that church members bring for Laundry Love. They receive donations through the church and also end up with spontaneous gifts from laundromat patrons. 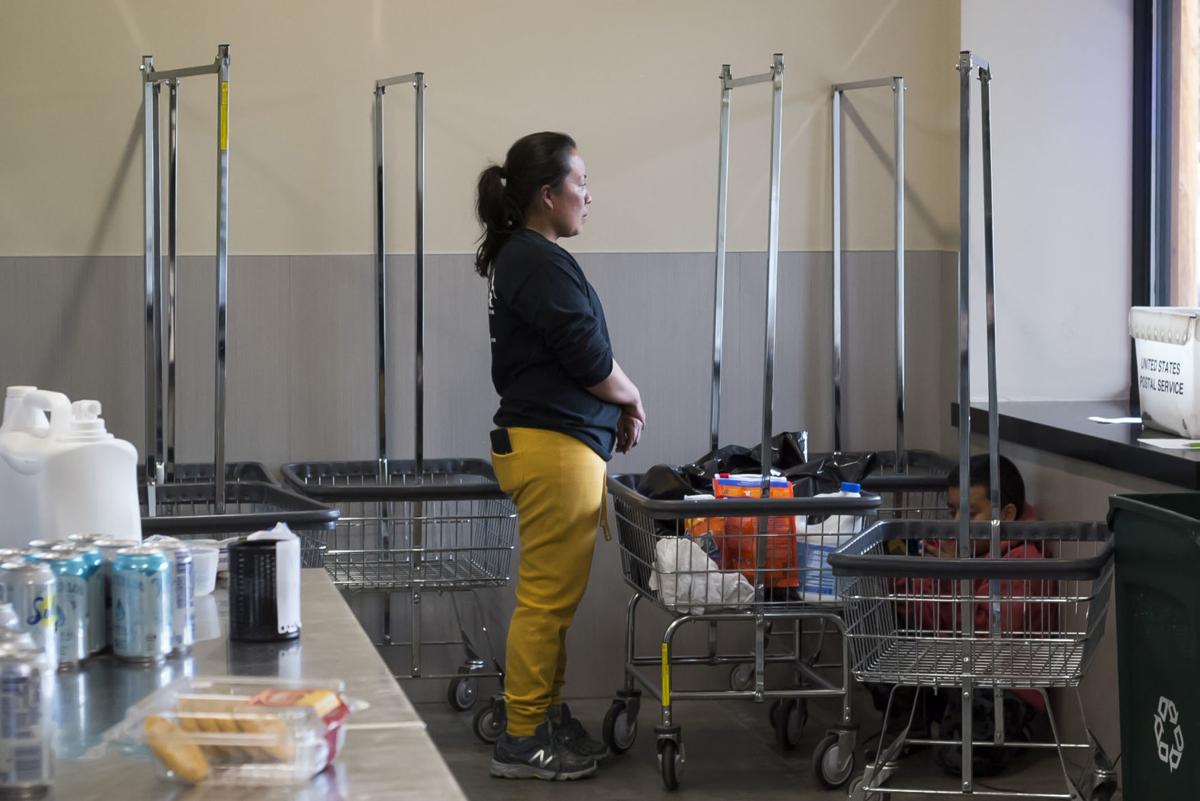 Yara Mauricio looks out the window while she waits for her machines’ cycles to finish Thursday at Jackson Laundromat. Mauricio washed four large loads of clothing and blankets for her family of three. 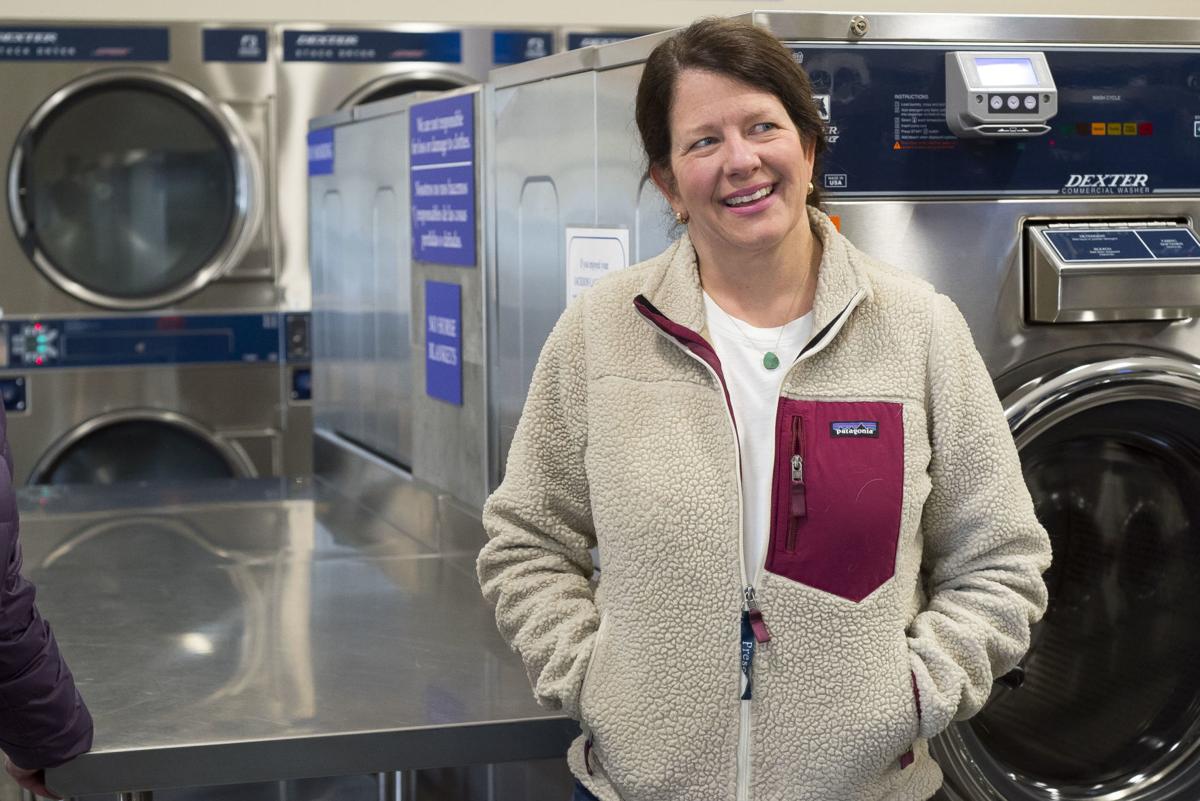 Cindy Bartz smiles during St. John’s Episcopal Church’s Laundry Love project hosted by Jackson Laundromat on Thursday. Laundry Love is an initiative to pay for every patron’s washers and dryers from 5:30 p.m. to 7 p.m. the second Thursday night of the month. “We’re just here to try to make the week a little easier,” said Cindy Bartz.

Yara Mauricio loads a washing machine. She came specifically for the chance to wash and dry her family’s clothes and blankets for free, which reduces her monthly laundry outlay of $65 to $70.

Annie Sampson holds a small portion of the hundreds of dollars in quarters that church members bring for Laundry Love. They receive donations through the church and also end up with spontaneous gifts from laundromat patrons.

Yara Mauricio looks out the window while she waits for her machines’ cycles to finish Thursday at Jackson Laundromat. Mauricio washed four large loads of clothing and blankets for her family of three.

Cindy Bartz smiles during St. John’s Episcopal Church’s Laundry Love project hosted by Jackson Laundromat on Thursday. Laundry Love is an initiative to pay for every patron’s washers and dryers from 5:30 p.m. to 7 p.m. the second Thursday night of the month. “We’re just here to try to make the week a little easier,” said Cindy Bartz.

With each extra-large washing machine holding approximately 8 normal-size loads, she’s washing 32 loads of clothing and blankets. She is also doing it free of charge, a financial gift for a woman who estimated she spends $65 to $70 a month washing for her family of three.

Laundry Love was a program quietly started last fall, a once-a-month opportunity for anyone to walk into the Jackson Laundromat and do their laundry with St. John’s Episcopal Church paying the cost. Volunteers wait at the front, their pockets stuffed with quarters, ready to fill washers and dryers.

Volunteers have seen people strip the jacket from their backs, or jog out to their cars to bring in more clothes or blankets. On Thursday Annie Sampson, a longtime St. John’s member, asked a man if he wanted to wash the bag he brought his clothes in.

The idea was born of the church’s service committee, though Laundry Love has been on the minds of St. John’s members since the Bartzes — Cindy’s husband, the Rev. Jimmy Bartz, leads the congregation — came to town in 2016. They started a similar program where they lived in California, a program Jimmy Bartz called “modern-day foot washing.”

In Jackson, however, Laundry Love arose from another program, one that offers free day passes to the Teton County/Jackson Recreation Center. About a year ago the church started purchasing day passes, aiming to provide a warm shower to workers sleeping in cars, campers, tents — whatever.

“We thought after a nice, hot shower it does not feel good to put on dirty clothes,” said Browse ‘N’ Buy store manager Lonnie Brown, who sits on the church’s service committee.

Those who visit Jackson Laundromat — located next to the Habitat for Humanity ReStore on Broadway— between 5:30 and 7 p.m. on the second Thursday of the month are treated to as many loads as they need to wash and dry, no questions asked.

Though a few regulars know about the Thursday offering, many who came into the laundromat Thursday were surprised to be treated to a free wash and dry. The surprise is the best part for those handing out quarters.

Luis and Lara Garcia usually wash clothes on the weekend but popped into Jackson Laundromat on Thursday to load three machines for their family of four.

Typically they spend about $14 a week on laundry. On Thursday they spent nothing and were offered free snacks of cookies and sparkling water.

Depending on the size of the washer used, the cost runs from $3.75 to $8 a load, and $1 for 20 minutes of dry time. Bartz estimated the church paid for 83 loads of laundry at April’s Laundry Love. In May it was 80 loads.

Part of the program is designed to build a bridge between communities within the community, and it has. The drawing on the Laundry Love flyer hanging in the window of the laundromat is by Brett Colter, a Laundry Love customer who was eventually commissioned to provide the artwork. As the program enters its eighth month the church is starting to get to know more of the regulars — “Oh, he was here last week,” Sampson said while readying to hold the door open for a man lugging an oversized duffle — while still meeting new people.

“Frankly, part of the idea is to help build a bridge,” Bartz said. “While we’re sitting around doing laundry, if it’s appropriate we strike up a conversation or play with the kids.”

Almost no one is a stranger to manager Mandy Salamon, who spends most of her week at the laundromat welcoming customers and keeping the machines clean. Though Romanian, she speaks fluent Spanish, a skill she picked up while working at High Country Linen and one she uses daily chatting with customers. (Salamon translated for this story.)

She also becomes a de facto donation jar, collecting cash gifts that customers leave to support the program. On Thursday it was a $5 bill. In the past it’s been a $20 bill. Customers and do-gooders have also dropped off detergent, and, on one occasion, a plate of cookies.

While snacks are provided, and appreciated, most of the money collected goes to rolls of quarters.

“Ninety-nine percent of the cost is feeding the machines,” Sampson said.

Maddie Isler admitted she doesn’t do her laundry enough.

“I wait until the last minute,” she said.

On Thursday she was treated to a free extra-large load at the Jackson Laundromat, a big pile of her and her husband’s clothes.

The four-year resident estimated she spends up to $50 a month on laundry. Even just one week off is a nice chunk of change back into the budget, she said.

For travelers Lionel Hudson and Terry O’Shea, Australians who were on an nine-day bus tour of the national parks, a few free loads were also a significant savings. Especially coming from a country where their currency equates to only about 70 percent of a U.S. dollar.

They had planned to wash a few things at their hotel but were bested by their bus mates. Strolling into the Jackson Laundromat to a few free loads of laundry was “a lovely surprise.”

What they saved in laundry they spent around the corner, grabbing dinner at Chinatown.

Laundry Love, a program of St. John’s Episcopal Church, provides laundry money between 5:30 and 7 p.m. on the second Thursday of the month at the Jackson Laundromat, 850 W. Broadway, Unit F. The next laundry session is June 13.

Sign up to volunteer or donate cash, detergent or other laundry supplies by emailing lonnie.bnb@stjohnsjackson.org.