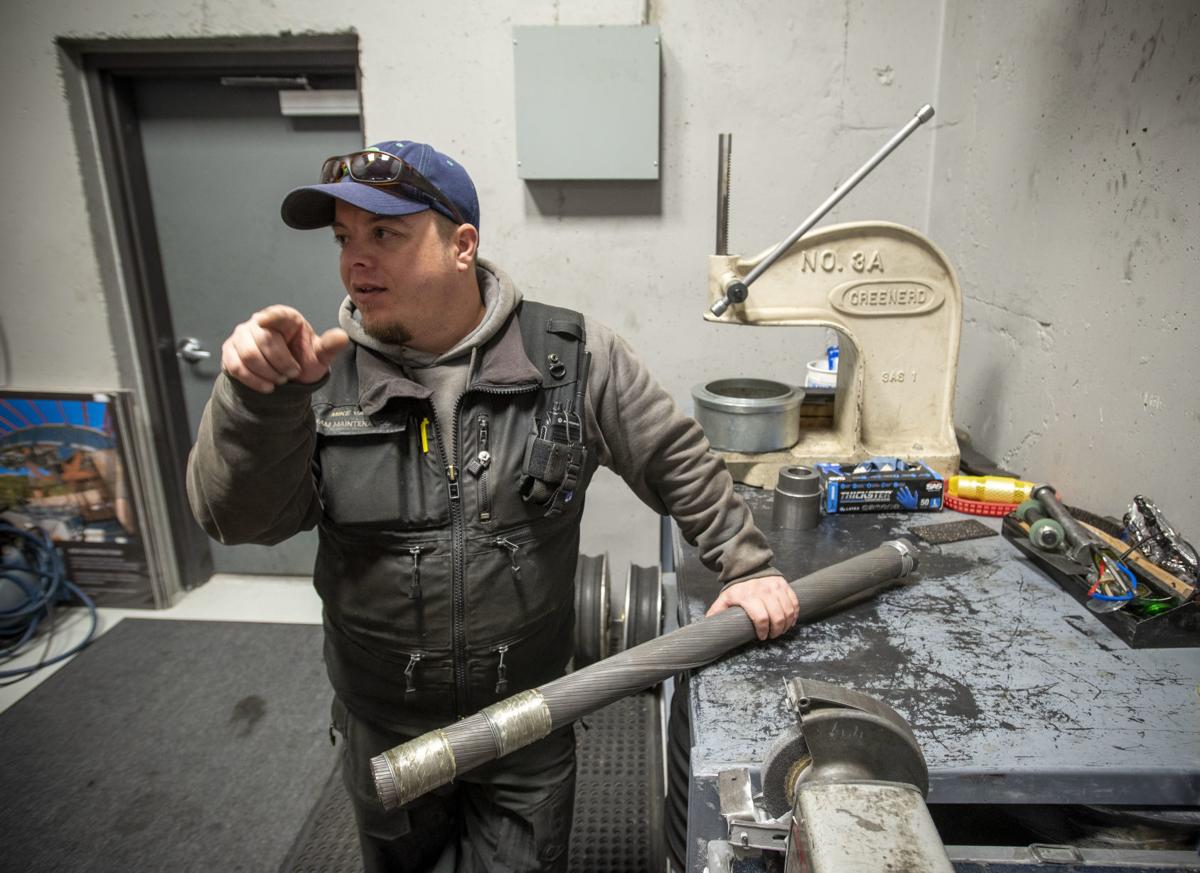 Mike Vase, head mechanic for the Aerial Tram at Jackson Hole Mountain Resort, stands next to a short section of the tram’s track cable, on which the tram cars glide while being hauled up and down Rendezvous Mountain. “This thing is heavy,” he said. “It’s 13 pounds per square foot. I’ve got 12 miles of that in the air.” 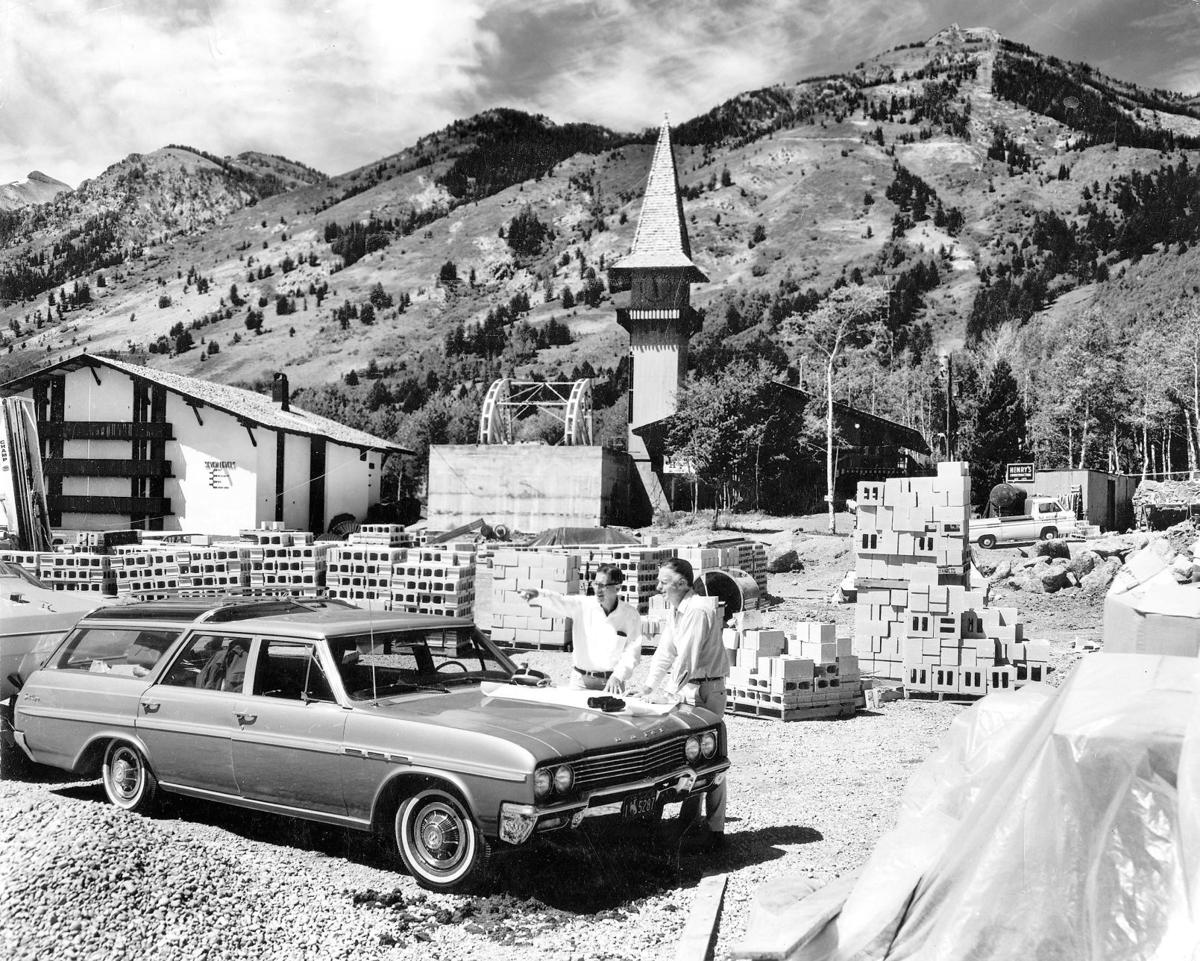 Jackson Hole Mountain Resort co-founders Paul McCollister and Alex Morley review plans in 1965 as the original tram begins to take shape next to the clock tower that would become a symbol of Jackson Hole. 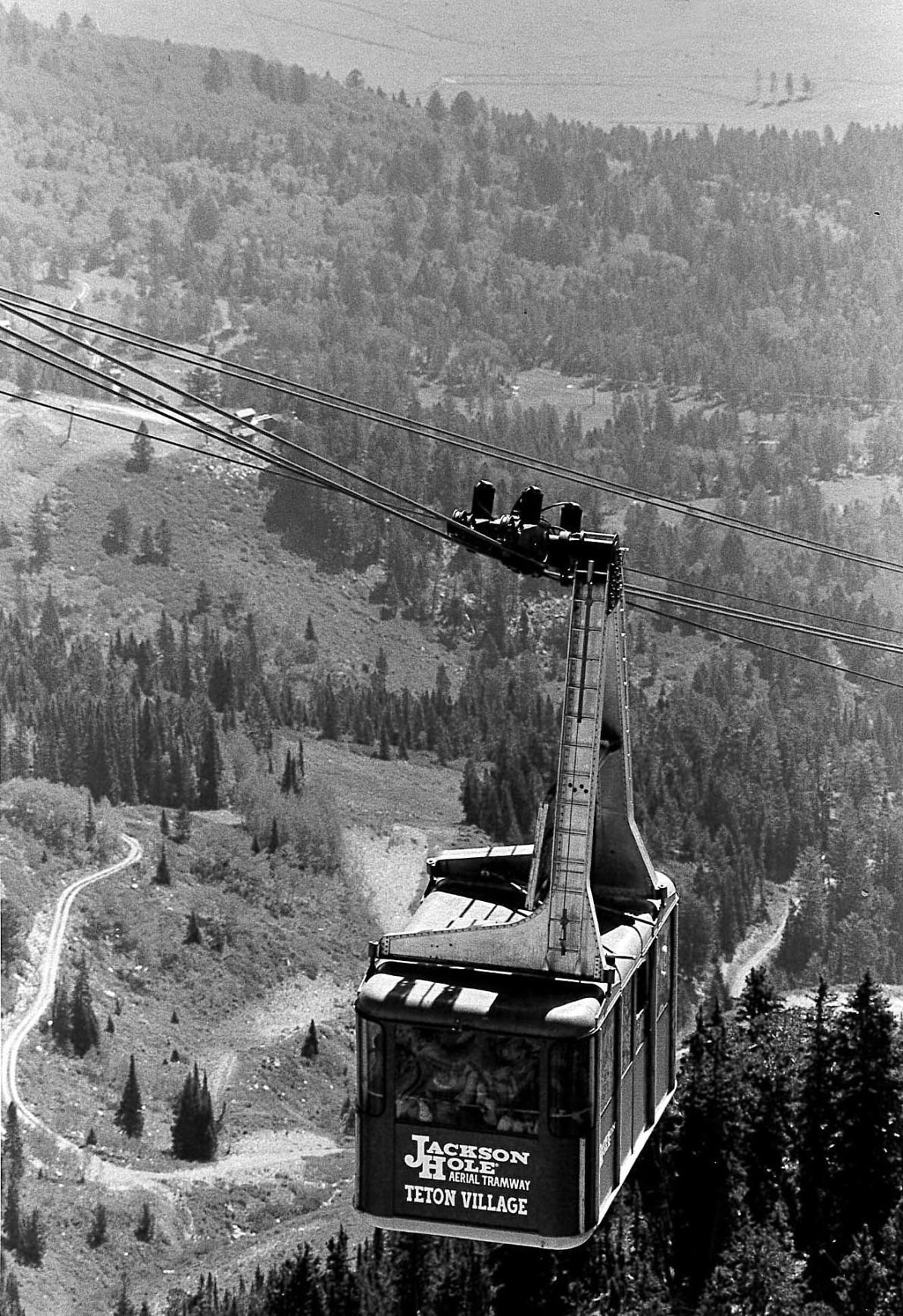 The Jackson Hole Aerial Tram does its job in 1985. 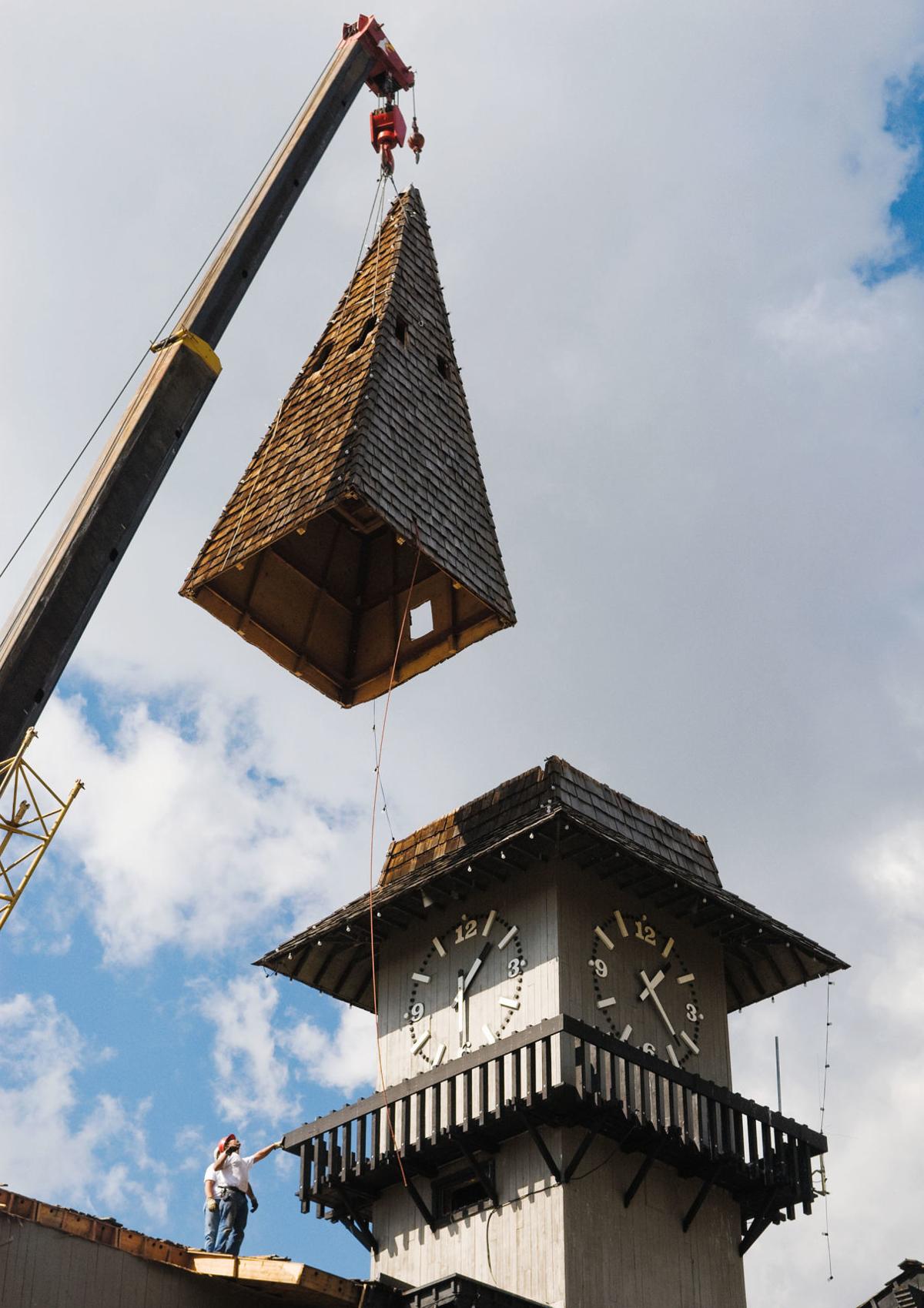 Crews remove the roof of the iconic clocktower during the deconstruction of the old Valley Station in September 2007. 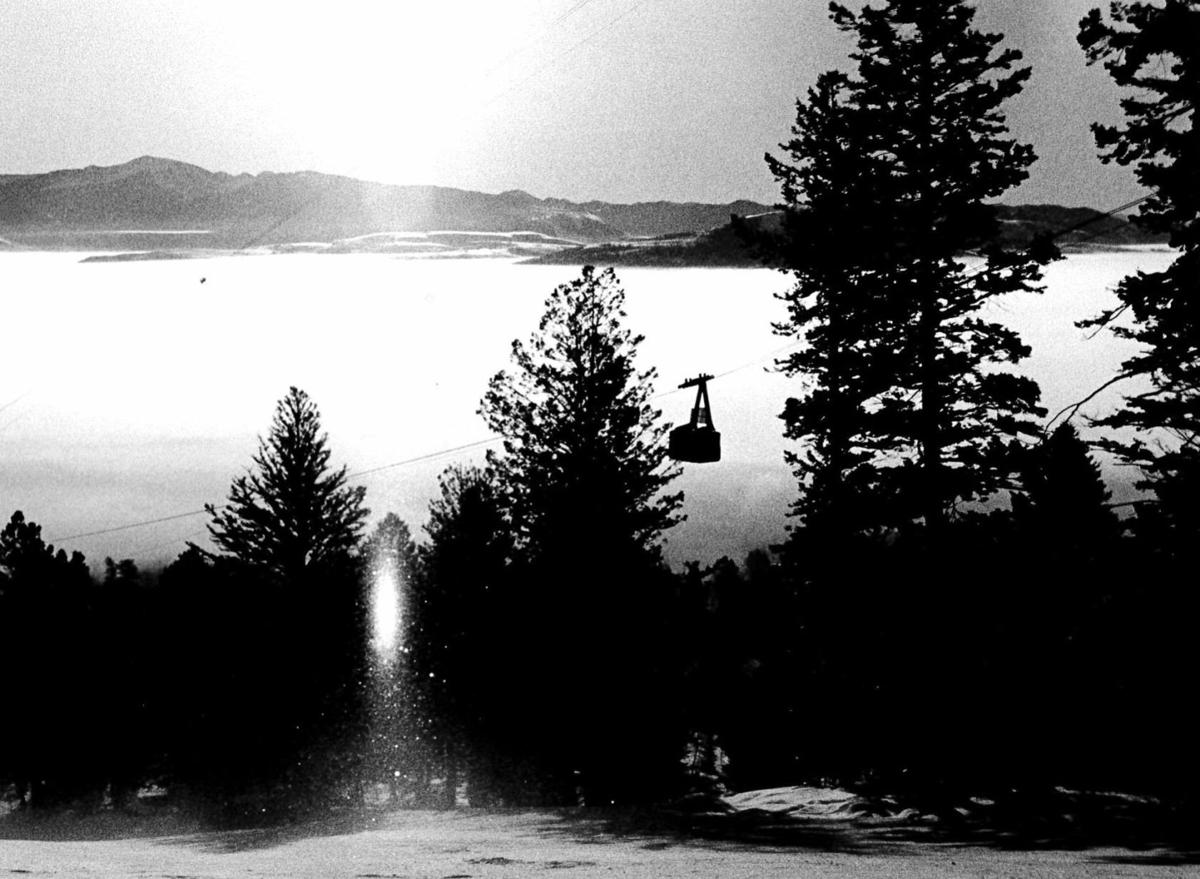 The motor room at the Aerial Tram at Jackson Hole Mountain Resort, the heart of the ski hill’s signature lift.

Mike Vase is like a proud parent when it comes to the Aerial Tram.

In the tram’s motor room Thursday, Vase, the head mechanic, bounced from machine to machine, pointing out the multitude of backups and redundancies, stepping into corners to explain things, stopping at a workbench to pick up a piece of the track cable.

The Aerial Tram is an intricate, impressive array of machinery, from bullwheels taller than a person to a diesel engine the size of a tractor-trailer cab, a backup should the electric motors fail. With miles of cables spinning for hours a day most of the year, Vase and his team have their hands full with regular maintenance like checking fluids and testing components.

Though it doesn’t happen often, major parts are replaced, because the entire apparatus lasts longer than its individual parts. In October, Vase, his team and a crew from Doppelmayr, a manufacturer that makes chairlifts and other “people movers” for the ski industry, replaced the haul cable, the line affixed to the tram that pulls it up and down Rendezvous Mountain.

This was the first time Jackson Hole Mountain Resort has replaced the haul line on this particular tram, which was completed in 2008. But it’s just one piece of the tram’s rich engineering history.

It’s hard to imagine Rendezvous Mountain without metal stretching across the cliffs at its apex, without the tall towers like sentinel trees dotting its face. When Sam Sherrard arrived in Jackson in the 1960s, however, that’s what he saw: a blank slope.

Sherrard, now 91 years old, was a superintendent (one of the youngest in the country) for a New Mexico company hired to build North America’s most ambitious aerial tramway. His company had built a tram in Albuquerque, so it was a logical choice. But Sherrard saw glaring distinctions between the two projects.

“Winter construction and water was the difference,” Sherrard said. “We had to keep everything inside.”

That was no easy task in 1964, when the infrastructure and sprawl of Teton Village and the resort was a concept. Construction started in spring of that year, with the towers being the focus of early building.

The Tetons have unforgiving, flaky rock to build on. Installing the towers involved blasting and drilling well below ground, then cementing and grouting the footings for the massive structures into what Sherrard called “reasonable rock.” The Tetons’ geology forced Sherrard and his team to drill 18 feet deep in places.

Finding good footing for the towers was far from the only difficulty. Erik Lambert, a writer for the News&Guide, detailed in a 2008 special section on the Aerial Tram that two workers died when their cement bucket fell from the cable, and that some parts of the original design, like a poorly located wind guard system, had to be scrapped or redesigned.

But the builders also ran into day-to-day struggles.

“We had to put in a temporary tram to carry things,” Sherrard said. “Our helicopter couldn’t handle the cement.”

For perspective, new helicopters, like the ones used in the heli-skiing industry, take hundreds of pounds of people and gear to high-elevation ridge tops. That was not the case for Sherrard and his team, whose helicopter struggled at 6,500 feet (the base), even after everything except the engine was stripped from it.

“Comparatively, we had an oxcart,” Sherrard said.

As Sherrard and his team inched closer to completion they ran into another problem. Before they could hang the haul and track cables, they had to install a counterweight, a 110-ton hunk of underground concrete connected to the haul line.

They excavated below where the tram dock sits now, a cavity large enough to fit front-end loaders and other heavy equipment. Thinking they were atop solid rock, they blasted a hole through the bottom of the counterweight pit, finding quicksand below.

Sherrard said soil cores hadn’t shown they would find water below their counterweight pit, but the discovery sent them scrambling. They pumped all the water out, then filled the area with aggregate and rock.

Finally, in summer 1966, the cables were strung, the temporary tram dismantled, the red cars installed and operation began. “Bona fide residents of Teton County, Wyoming and all those who are employed here by local firms” were able to ride for free during the first couple of weeks of operation, according to Jackson Hole Guide archives.

Sherrard headed home to the warm deserts of New Mexico, and skiers began four decades of crowding into the red box only to rip back down the mountain again.

For his part, Sherrard looks back on the tram as a springboard to a long career. As one of the country’s youngest superintendents, he oversaw a 2 1/2-year project that became a community staple, and though he was glad to escape the cold, he took home a pile of lessons.

“It was a process of getting an education on the tramway,” he said. “I got a Ph.D. in winter construction, and they seemed to be happy with the work we were doing.”

Not your average maintenance

Not many tangible pieces remain of the original tram or the building that housed the dock. Local lore has it that when the crane removed the old clock tower people stole the numbers off the clock faces by morning. One of the old cars sits below the new tram as an exhibit, and Vase, the mechanic, said another lives in the “boneyard,” an off-limits area of the resort where mechanical implements go to pasture.

The system that powers the tram, however, is remarkably similar to the original construction, and the $31 million replacement tram that started operation in 2008 follows the same path as the one Sherrard built.

“The old tram was dead-on,” resort President Jerry Blann told the News&Guide when the new one opened.

In the motor room, as the bullwheels and motors hummed while carrying people uphill, Vase pointed to one upgrade, fiber-optic cables that run through the track cable the tram travels on. The fiber-optic lines carry internet signal, webcam data and a host of other pieces of information.

The haul cable, on the other hand, is analog: Its one job is to transport the tram. The new cable, made by Swiss company Fatzer, shipped from Europe, meaning it went through the locks of the Panama Canal, but it was spliced on-site.

It has six braided strands of cable around a synthetic core that flutes out into the interstitial areas between them. Vase said seeing degradation in the synthetic core of the old haul cable told him and his team they needed to replace it.

“We were way ahead of the game.”

The haul line replacement was the longest on record in the United States, with 4.8 miles of cable. Vase was at his proudest when talking about the team that strung the new cable, which they did without the use of a helicopter, instead using machinery to string the cable up the mountain.

Sherrard came to witness. The two men were able to share a moment of history, connected by how the tram changed their lives and careers.

They are far from the only people whose lives were transformed by construction of the tram. Another had a hand in making the new tram the centerpiece of an evolving Teton Village.

Eric Logan moved to Jackson in 1995. Logan grew up in Casper, skiing a tiny ski hill and taking trips to Teton Village. He took a position as an architect with John Carney, setting in motion the wheels that would lead him to the redesigning of the tram dock and building.

“It was like riding a unicorn, in that I get to live here, and we have this opportunity to build this iconic project,” Logan said. “If you could write your own fantasy and chart your path as a young architect, that would be the story.”

Logan wasn’t a part of the engineering team that replaced the pieces Sherrard built, the towers, the mechanical guts and such. He and Carney designed the structure that is the first thing most people see when they arrive at the resort.

He said they wanted to respect the old tram building, but modernize it so it fit with Teton Village’s changing milieu. They employed big stone facades, shed rooftops and, of course, the new clock tower.

Logan and Carney also wanted to pay homage to the machine itself. The tram building is, at its most basic, a loading dock and a mechanical room. It isn’t a hotel, a restaurant, a cafeteria. Its purposes are transportation and machinery, and the architects wanted to highlight them.

“Rather than encase all the beautiful technology, the roof floats over the whole thing,” Logan said. “The glass walls expose people to that precise machinery.”

Standing at the tram’s base, watching the dock swing across to the other side as the downhill car reached the dock, Vase applauded the design, for aesthetic and mechanical reasons.

“Those are meant to be seen,” he said of the big yellow bullwheels. “For looks, but also because that yellow color can show if things are dirty, or if paint gets rubbed off anywhere, which would tell you something is broken.”

For most skiers, who probably don’t notice the design day to day, the mechanical marvel is a vehicle that whisks them toward powder turns. But it is also a symbol of their skiing community, the big red box that conjures memories and a sense of belonging.

For a select few, like Vase, Sherrard and Logan, the tram also represents the apogee in their careers. Nearly 60 years removed, Sherrard looks back on that original project as a crowning achievement, a monumental endeavor that — given a Fountain of Youth — he would repeat, just for the fun of it.

This story has been updated to show that Vase and his team used manpower and machinery to string the new haul line. — Ed.