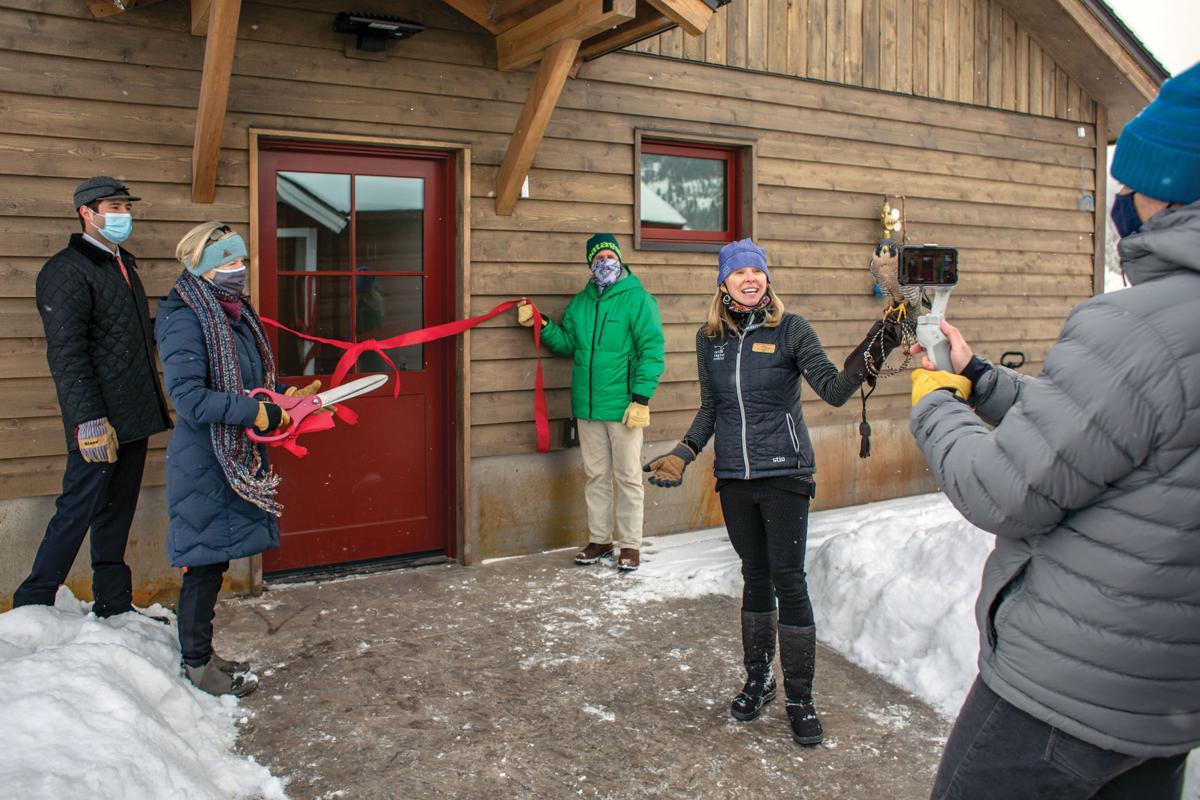 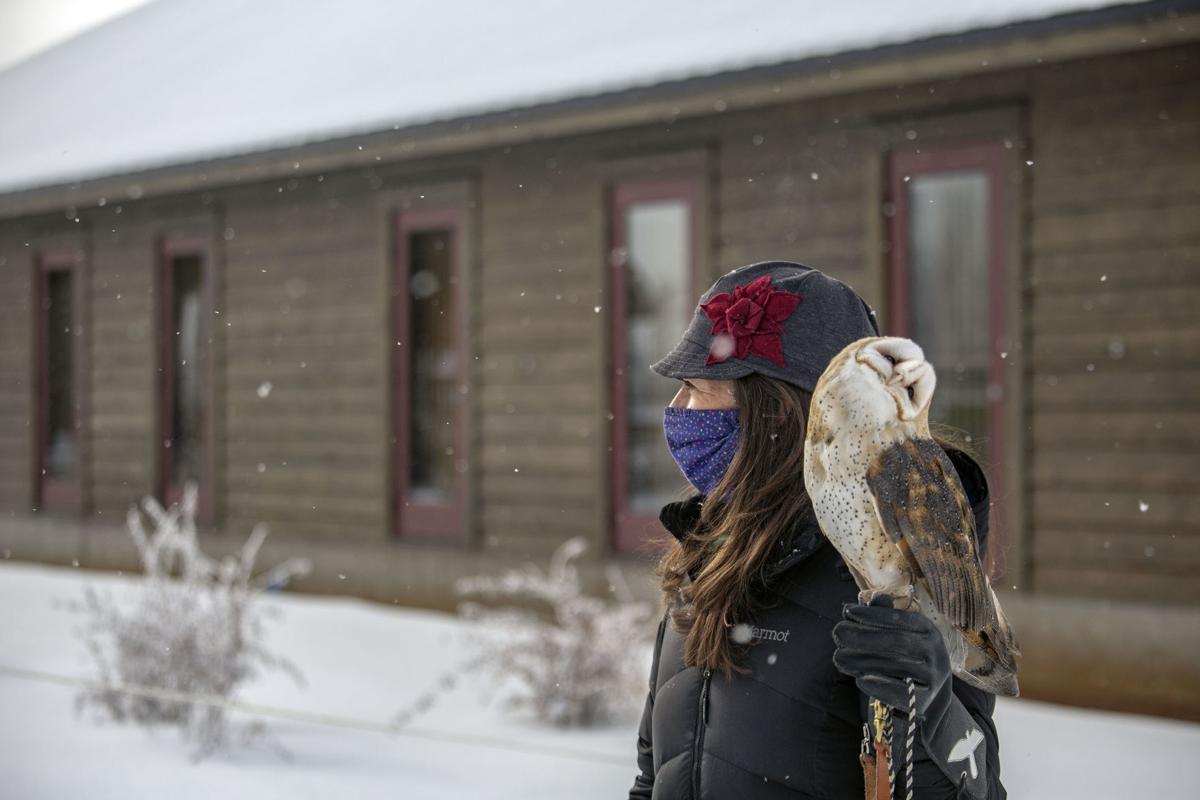 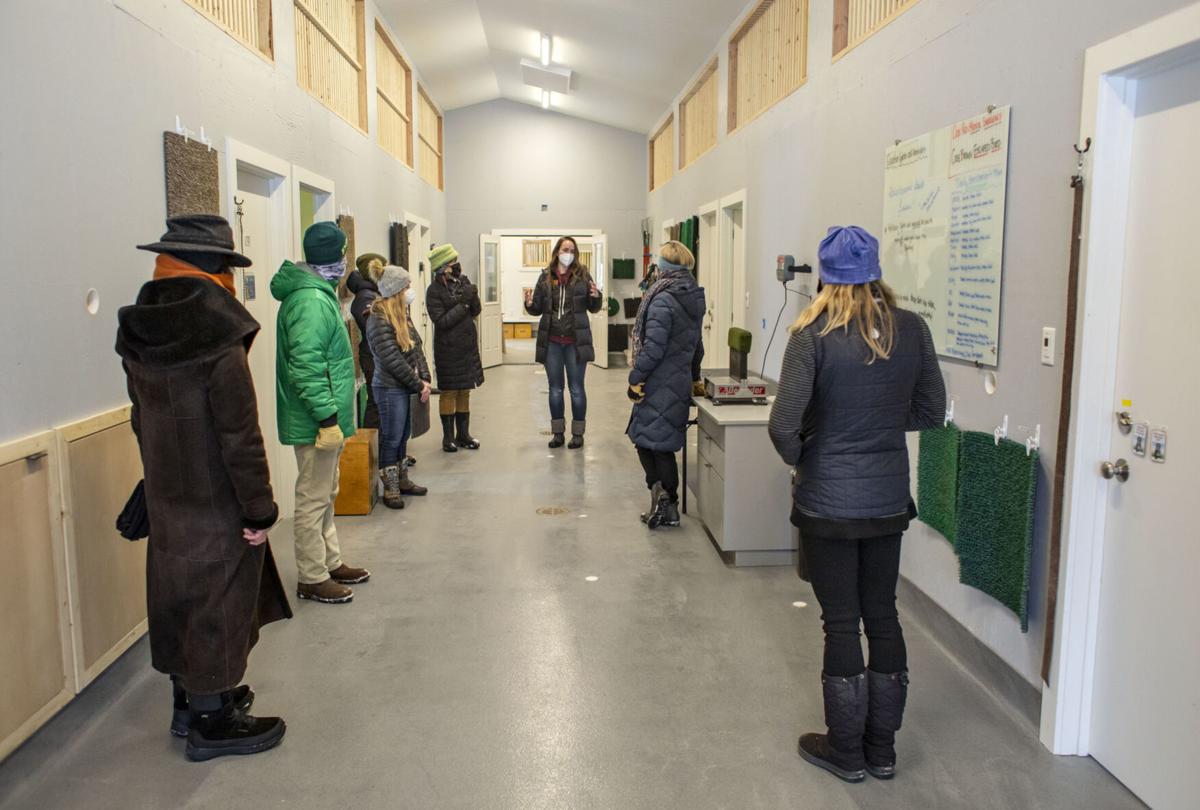 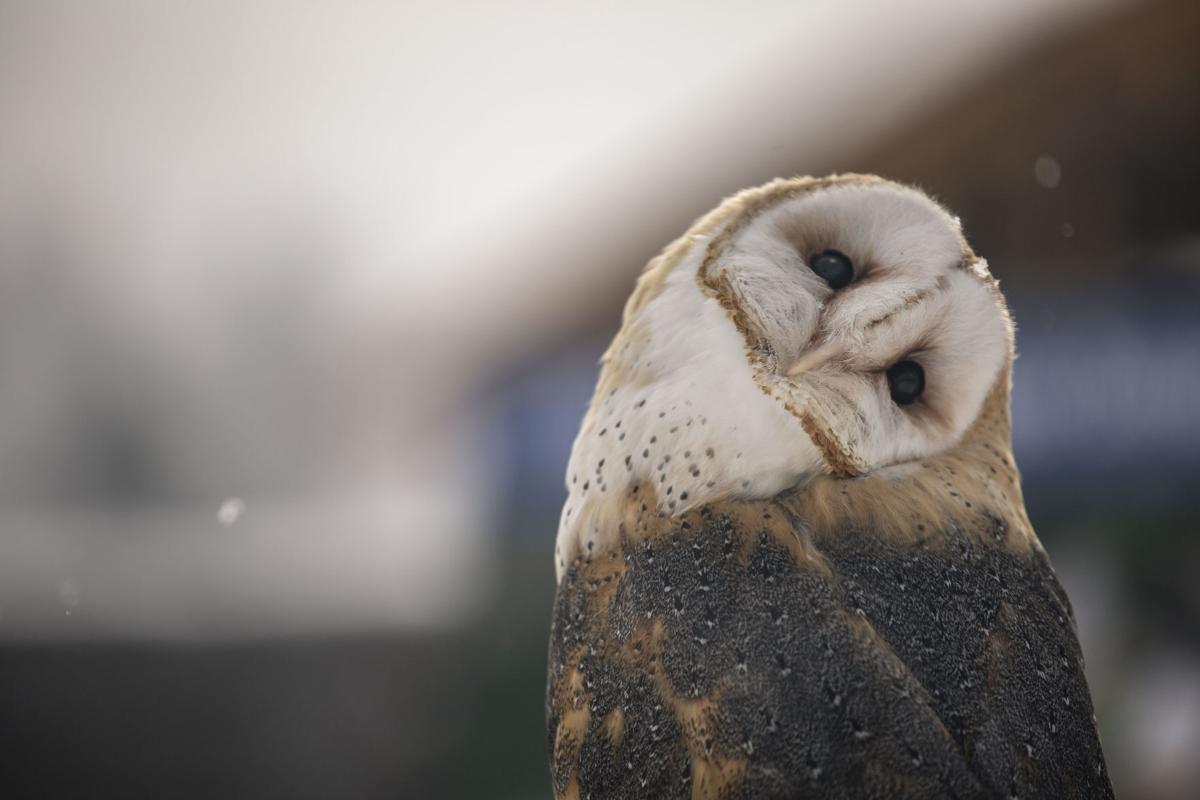 Manzana, a barn owl and full-time resident of the Teton Raptor Center, turns her head to look at the falling snowflakes during a ribbon-cutting ceremony for the center’s three new facilities last Tuesday.

Manzana, a barn owl and full-time resident of the Teton Raptor Center, turns her head to look at the falling snowflakes during a ribbon-cutting ceremony for the center’s three new facilities last Tuesday.

“’Twas the night before ribbon-cutting, when all through the center, feathers were fluffing with dreams of a home that is better.”

Amy Brennan McCarthy, executive director for the Teton Raptor Center, recited her rendition of Clement Moore’s “A Visit from Saint Nicholas” on Dec. 15 at the ribbon-cutting for three new or renovated structures at the bird-of-prey rehabilitation facility on the historic Hardeman Ranch, marking a milestone in the third phase of a project that began in 2017.

“Given all that has happened this year,” McCarthy said, “for better or for worse, given all the challenges we’ve all encountered, we did want to mark this moment.”

The ceremony took place outside, with temperatures in the teens and a light snow in the air. Board members and staff — accompanied by a great horned owl, a peregrine falcon, a barn owl, an Eastern screech owl and a barred owl — bundled up to witness, standing “an eagle’s wingspan apart,” or about 6 feet, while others tuned in virtually from home.

The center has resided on the historic property outside Wilson since 2008 and has owned it since 2017, but “Roger’s dream,” as McCarthy called it in her poem, has been a long time in the making.

“We really got started in 1992,” said Roger Smith, founder, board member and the dreamer McCarthy alluded to. “We had it in our house, and we had frozen mice and quail in the sink and kids digging around for ice cream and having to dig through dead animals that we were feeding them.”

The dead animals were for the birds, not the kids, but the story indicates how far the nonprofit has come since its founding.

The renovation plan, fueled by a $10 million fundraising campaign, includes a mix of building removals, relocations, upgrades and construction, with a net gain of 2,837 square feet for a total to 19,524. It also involves the restoration of historic buildings like the pump house, which McCarthy said was “lovingly restored with attention to each and every log.”

The next phase of the project calls for workforce housing, a staff innovation hub and a research hub, scheduled for 2021, and an education hub in the historic North Barn in 2022, which will offer on-site programming to learn about the birds.

“They truly are the canaries in the coal mine,” Smith said. “We use that phrase sometimes loosely, but [the Raptor Center’s birds] are indicator species of what is going on on the landscape.”

While a National Park Service research biologist studying birds of prey, Smith came to realize the problems humans were creating for their winged co-inhabitants. He started the raptor program from his home.

“We started out in a very humble way,” he said, “and it has grown to where it is today based on how the community has responded to what we’re trying to do — supporting the research, supporting the idea of taking care of our neighbors, these birds that are encountering our built environment. We have an obligation to try and help.”

A new resident that the Center will be helping made its first appearance at the ribbon cutting: an injured infant Northern saw-whet owl (name to be determined) that will become a permanent avian ambassador, as an injured wing will prevent it from being released.

For those able to be fully rehabilitated, Smith said, the new treatment facilities are world-class.

“One of the indicators of the work we’re doing is how many birds can we get back out into the wild that come in injured,” he said, “and with that type of facility that percent, that number, keeps increasing.”

The birds will soon have a new flight barn, too, which McCarthy said will be the “signature facility” of the Teton Raptor Center, allowing birds to practice flying and to build stamina, energy and muscle for their return to the wild. It is expected to start operating in the new year, on top of the facilities that were dedicated last week.

“This has truly been a long-held community vision and dream,” McCarthy said, “that this property could support a conservation program that would also enable community engagement. We are really pleased, honored, humbled to have completed the phase that is dedicated to our birds so successfully in a year that drew us a lot of uncertainty.”

To view the ribbon cutting and take an online tour of the bird-care facilities, go to YouTube.com/user/tetonraptorcenter.

And, per McCarthy’s poetic homage, she hopes “to hear all exclaim, as we celebrate into the night — ‘Onward and upward to all, and to all a good flight!’”