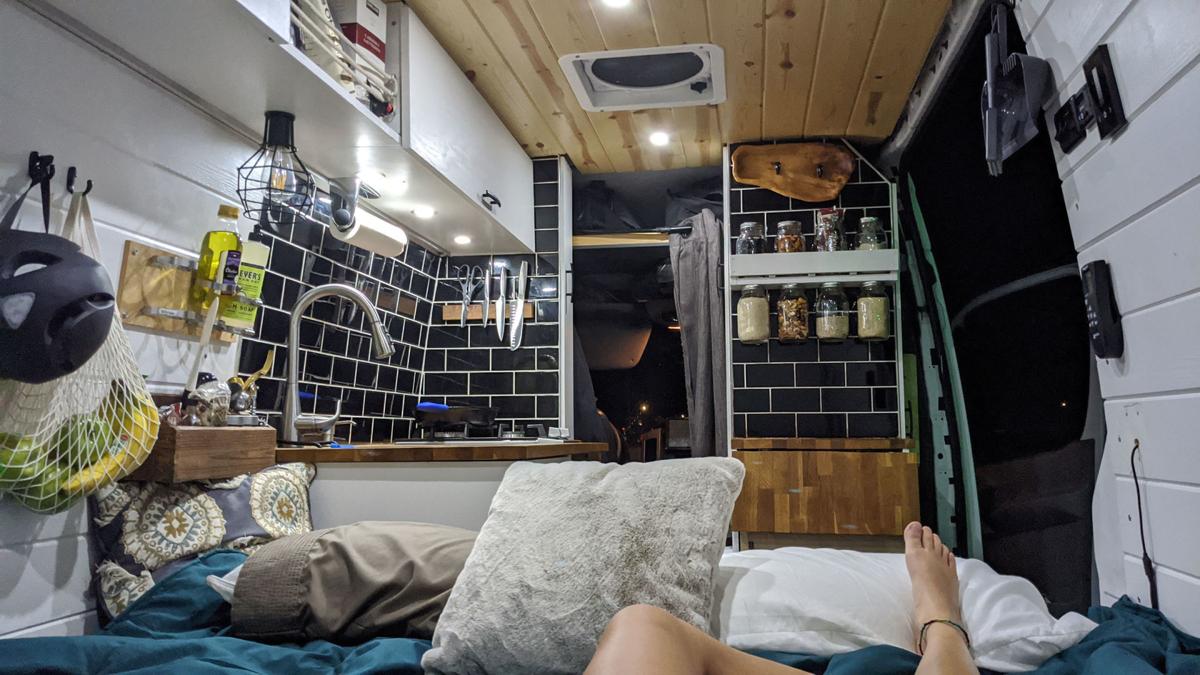 When life is compacted into just a couple hundred square feet, there are a lot of adjustments to be made and hacks to be learned, as many rookie road warriors learned this summer. The allure of van life is obvious: freedom, self-sufficiency, paring things down to the essentials. The realities are quite a bit different. 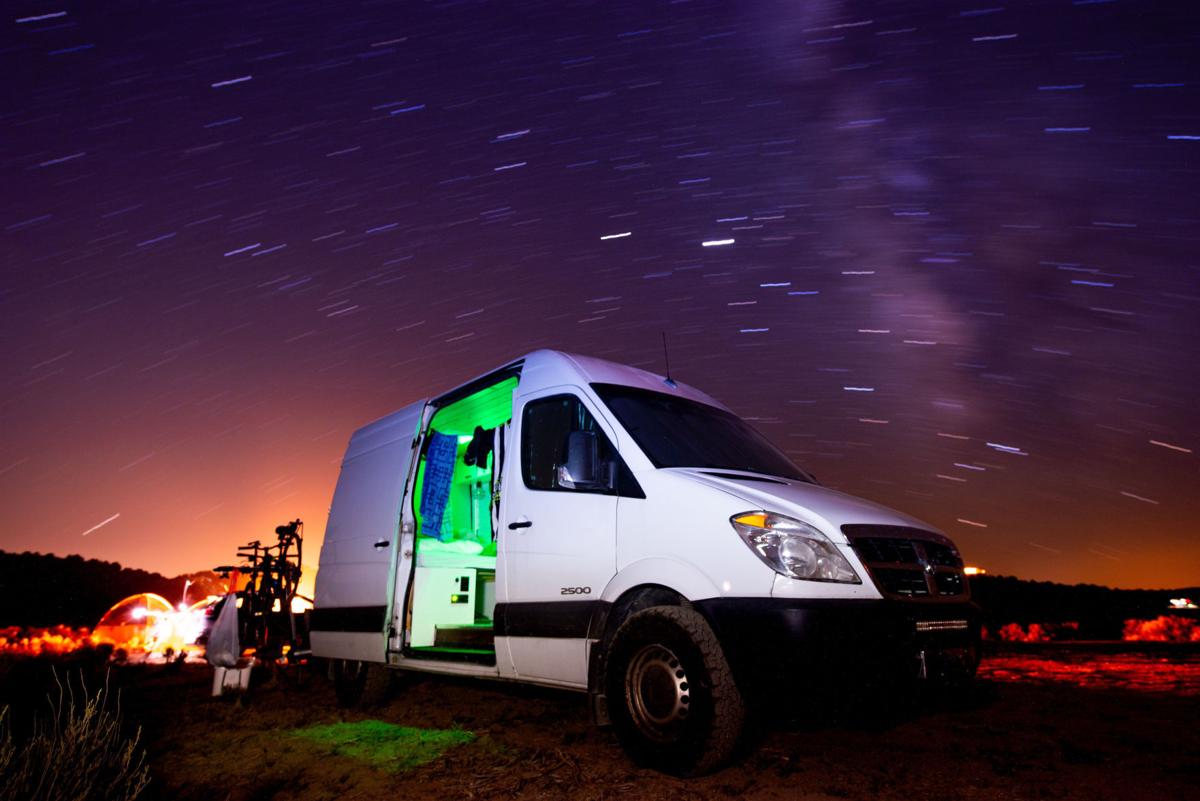 Who wouldn’t want a life like this, with the starry sky above — and no place in sight to take a shower?

When life is compacted into just a couple hundred square feet, there are a lot of adjustments to be made and hacks to be learned, as many rookie road warriors learned this summer.

The allure of van life is obvious: freedom, self-sufficiency, paring things down to the essentials. The realities are quite a bit different.

Who wouldn’t want a life like this, with the starry sky above — and no place in sight to take a shower?

Two retired couples lounged in their rented recreational vehicle at the Fireside RV park, off the Moose-Wilson Road, after a long day on the road when they heard a bang on their door.

“The people that were parked beside us literally knocked on our door and said, ‘There are flames shooting out of your propane exhaust pipe, and it’s going to blow up or you can catch on fire,’” said Debbie Marlin, part of the quartet.

While this was definitely the worst problem they had encountered (so far) during their road trip from Pennsylvania, it added to a seemingly never-ending list of things that had gone wrong. Marlin recounted how the door often got stuck, the TV didn’t work, there was an incessant rattling whenever they went over 55 miles an hour and they had stuffed cardboard in a wheel to fix an “ugly screeching noise.”

Marlin calls herself the “guilty party” that has dreamt of this road trip for years. Her husband, Gary Marlin, had grown up with the other couple, Dave Elliot and Joan Elliot. Once Debbie and Gary married, the four of them became “life-long friends.” Marlin had planned this summer’s road trip before the coronavirus pandemic hit. She had found a privately owned RV for the four of them to rent just 30 minutes from their home.

“This one had all the bells and whistles,” she said. “It had five televisions, an outdoor television, a soundbar, a prep cook station for outside and a wok. It had Netflix, a grill that slid out and blowup couches to put outside to lounge in.”

But then that all fell through a week before their scheduled departure when a branch fell on their decked-out RV, and Marlin was left scrambling to find another. She said it was a miracle to find another one available at such short notice, due to the high demand this year.

“I can’t tell you how many people we’ve run into across the country,” she said, “Like every single one of them was, ‘This is our first trip. We rented this, and we’re rookies.’”

Judging from conversations she had had on the road, a lot of people had decided to make some similar RV excursion for the first time to get out of the house and experience new things in a way that still felt safe, despite the virus pandemic.

Marlin noted that the Fireside RV maintenance staff that took a look at their outfit after the shooting-flames incident had confirmed those anecdotes. They believed a lot of RV rental companies had been turning their vehicles over to meet people’s demands.

Markus Kohn, the general manager of the Virginian Lodge, which also has an 11-acre RV park on the southern end of its property, the RV park is at 80% capacity while the hotel is around 94%.

“Because of COVID, people are taking driving vacations versus flying vacations to the whole town of Jackson,” he said. “If you look at the hotel, it’s sold out almost every single night here, so it’s not just the RV parks, it’s also the hotel side too.”

Unlike the RV couples who had long planned a road trip together, Theresa Garritano and her friend Dan (he preferred to conceal his last name) had acted on spontaneity. Dan bought their Mercedes Sprinter already built-out with two pilot seats, a stovetop, sink, freshwater tank, grey-water tank, a bed that converts into a table, a small fridge and a cooler. Garritano said that in normal circumstances she wouldn’t have been able to take a trip like this, but the design firm she works for has a work-from-home policy through the beginning of next year.

While Garritano grew up camping, she has experienced steep learning curves throughout her journey from Austin, Texas. High on her list of priority of things to figure out was where to shower.

“I first went down with like, ‘Yeah, we’re going to shower at truck stops,’ and being, you know, a single woman in like the middle of nowhere, that sounds horrifying,” she said. But she quickly came to realize that truck stop showers were incredibly private. She used an app to reserve the showers, and to her surprise they were well-kept and clean.

Alone time was the most important part of her showers, Garritano said. Having no other time to spend away from Dan, it was a nice opportunity to unwind and relax by herself.

While her seemingly dreadful showers became a source of happiness, Garritano still faced other challenges on the road. Not only does she work from the van, but she also takes an online Spanish class every Monday.

“I actually went through 15 [gigabytes of data] in like a week and a half,” she said, “which was obviously really quickly. So now I just need to use wifi when I can.”

She now spends a lot of her stops in coffee shops to save her jetpack for when she needs it most.

And while that already seems like a lot to figure out while managing work and class, Garritano’s also learned to be much more conservative with her water usage.

“We didn’t accommodate for the amount of water we go through washing dishes,” she said. “When you’re at home, we don’t even think about how much water you’re using.”

Their Sprinter was equipped with a 32-gallon freshwater tank and a seven-gallon greywater tank. Garritano didn’t realize how quickly the greywater tank would fill up. Because it is opaque, she has learned (the hard way) how to predict when it is ready for emptying.

Despite such challenges, life on the road is an experience she would never have had without taking the risk and deciding to just go for it.

Similarly, Gary Marlin said he and his foursome doesn’t regret the trip at all and that it’s been fun rolling with the punches.

“I think we’re at the point now where ... when something goes wrong, we kind of laugh it off because we’ve come to expect it at this point,” he said. “We’re making the best of it — we are. We’re having fun.”