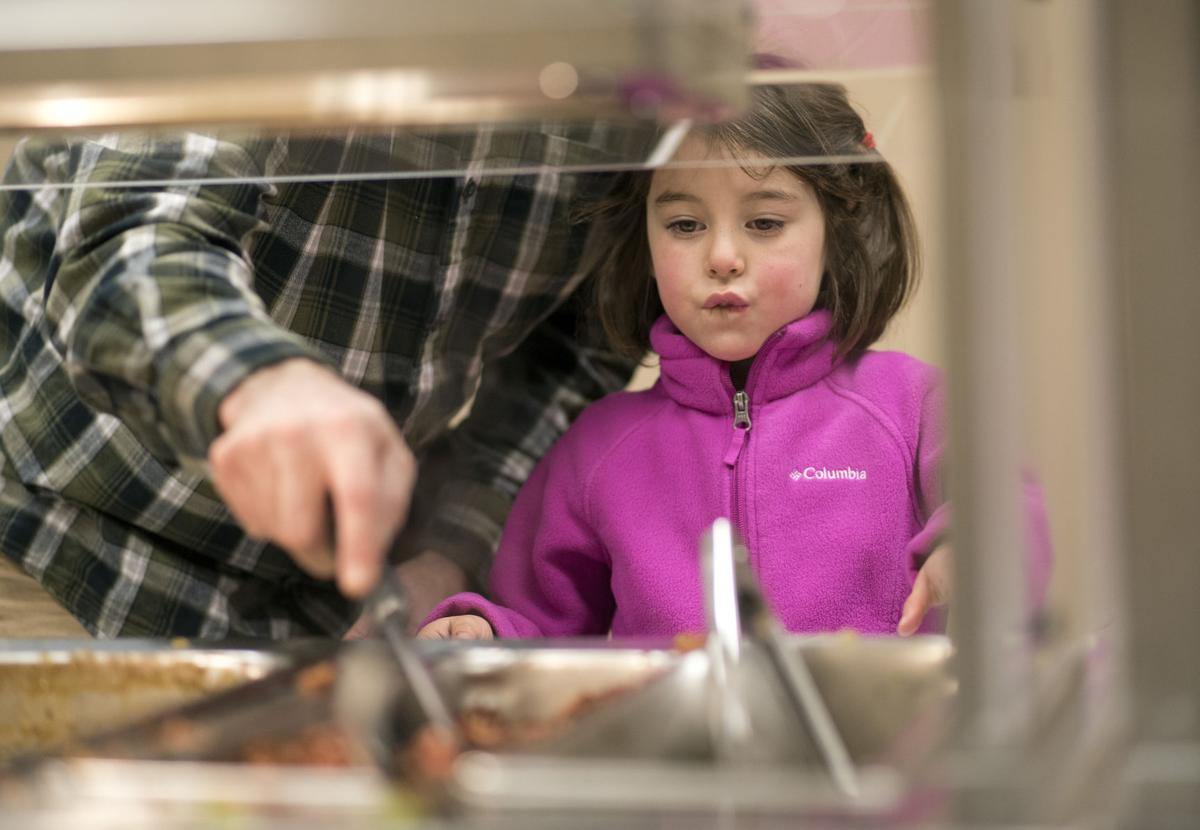 Talia Krasnow, 5, eyes some fixings while walking through the buffet line with her dad, Kevin. The meal included baked potatoes, macaroni and cheese, chili, vegetables and a variety of desserts. 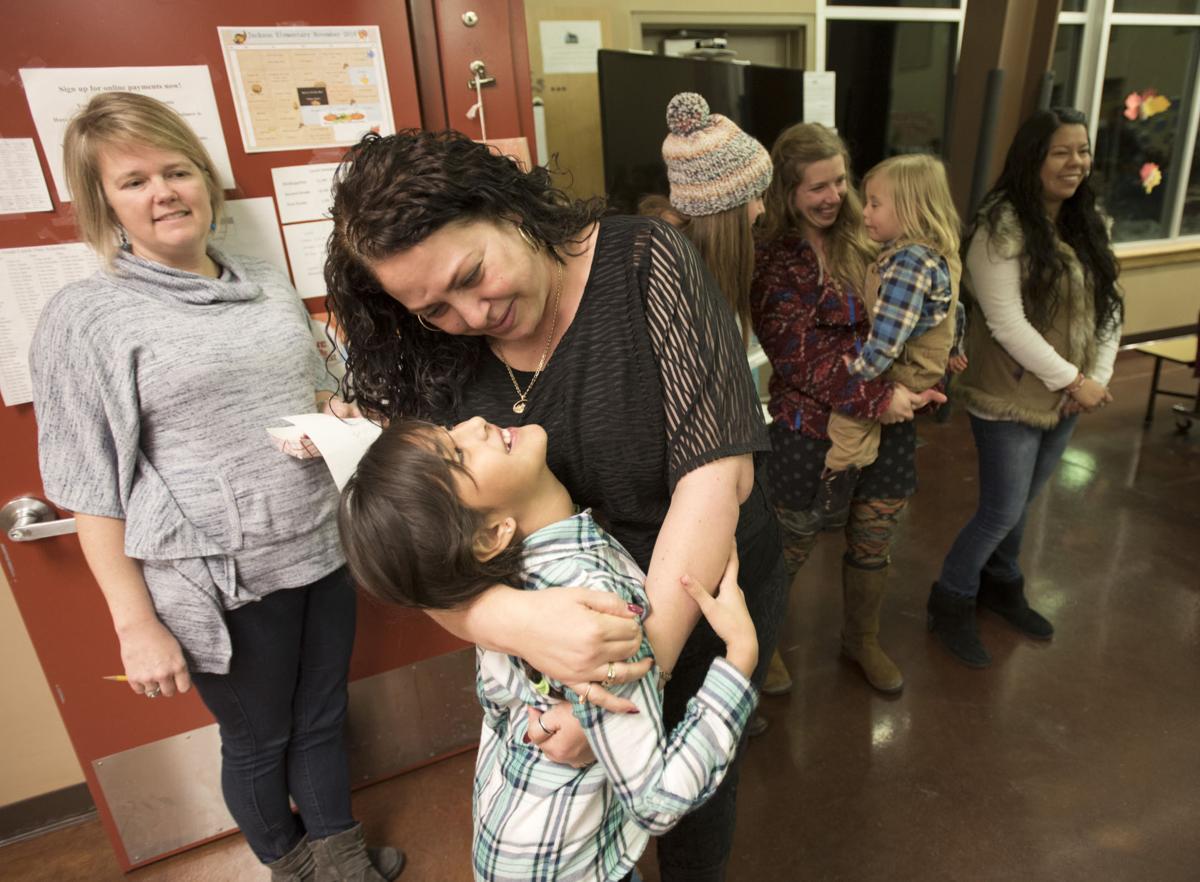 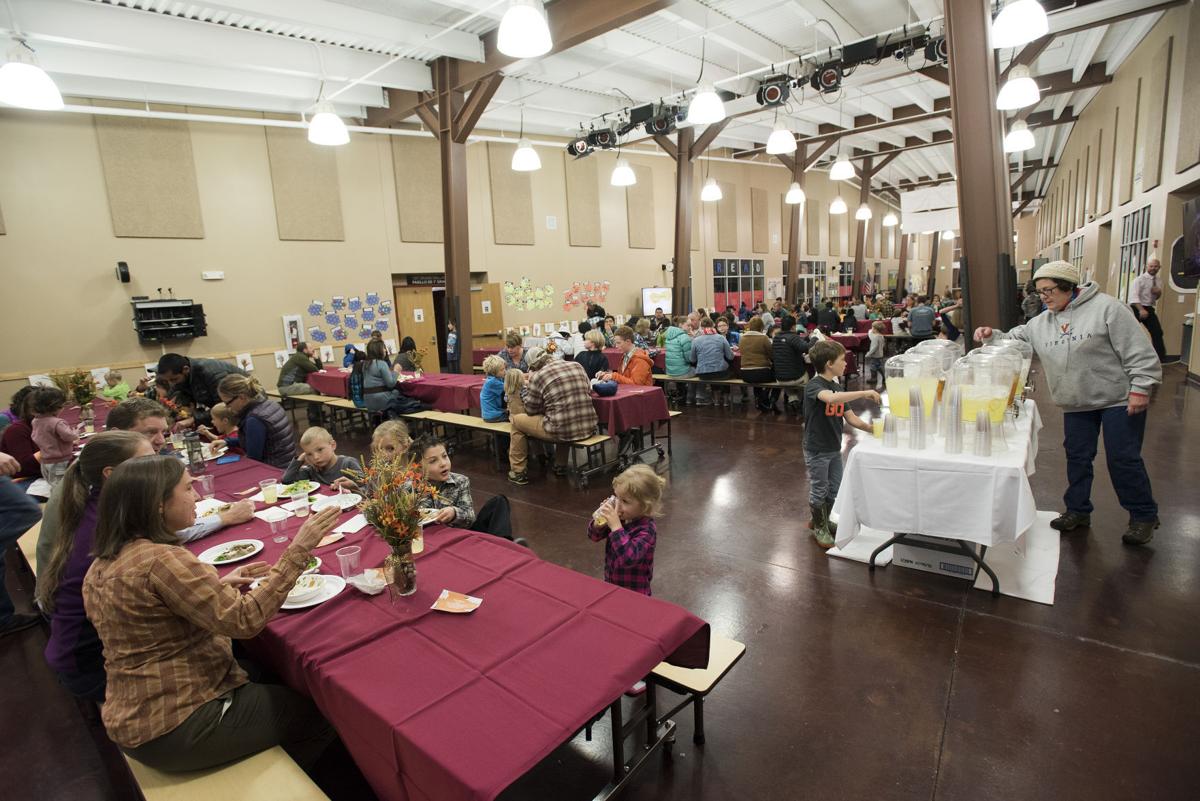 Jackson Elementary School students, family and teachers gather Saturday evening for their second annual community dinner. In addition to offering an opportunity to socialize the dinner helps those who might need a little extra over the long holiday weekend.

Talia Krasnow, 5, eyes some fixings while walking through the buffet line with her dad, Kevin. The meal included baked potatoes, macaroni and cheese, chili, vegetables and a variety of desserts.

Jackson Elementary School students, family and teachers gather Saturday evening for their second annual community dinner. In addition to offering an opportunity to socialize the dinner helps those who might need a little extra over the long holiday weekend.

Family, friends, pumpkin pie and airplane pajamas — there was a lot to be thankful for when the Jackson Elementary School community gathered for dinner Saturday night.

In only its second year, the annual dinner has become loved by the school’s students, families and teachers. This year 160 people came ready to eat.

The recently fledged tradition started in part as a way to make sure kids were fed over the holiday break.

“We know food insecurity is a big issue,” Principal Scott Eastman said. “It’s a long weekend, and if kids aren’t getting meals at school we figured we could throw a dinner together.”

Thanks to donations and teamwork by district employees, the meal was free for everyone who attended.

“It’s all the teachers who volunteered,” said Michelle Brown, the school’s social worker.

Some of the food was donated by Hole Food Rescue. Grants from St. John’s Episcopal Church helped round out the menu.

“No one had to pay,” Brown said. “But it’s more about a time when everyone gets together to build a different kind of relationship that’s not just academic.”

Wes Clarke, director of food services for Teton County School District No. 1, helped with the menu and dinner preparations. Guests enjoyed a baked potato bar with myriad tasty toppings, macaroni and cheese, chili, cooked veggies and a plethora of desserts.

It takes a village to put on a feast like that. In the back, eighth-graders Kendall Seaton, Nicholas Weston and Danny Kim volunteered to wash dishes.

The boys invented a system for being as efficient as possible but somehow managed to get partially to mostly drenched, all in good fun.

Flowers dotted the cafeteria tables, jazzed up with tablecloths. Children ran around playing games while teachers and parents socialized. It was cozy.

Kids said they were appreciative for a wide variety of things.

They’re special because they have his favorite planes — fighter jets — on them. His sister McKenzie Clarke, 7, chimed in, too.

“I’m thankful for my family,” she said.

Rose Repinski, 5, said she was thankful for her family and friends.

The Ibarguen brothers had a variety of gratitude to share.

His brother Elijah Ibarguen, 9, pondered the question for a bit.

“I’m thankful to have a break from school,” he said.

”For the pilgrims who started the first Thanksgiving,” he said. “And pumpkin pie.”

Teachers were pleased with how the evening went.

”It’s a great opportunity to get families together with their kids,” first-grade teacher Jodeen Tebay said. “It’s more personable to see them here with each other, rather than just the kids in our classrooms or the parents during parent-teacher conferences.”

”I love this day,” she said. “I hope this tradition continues.”