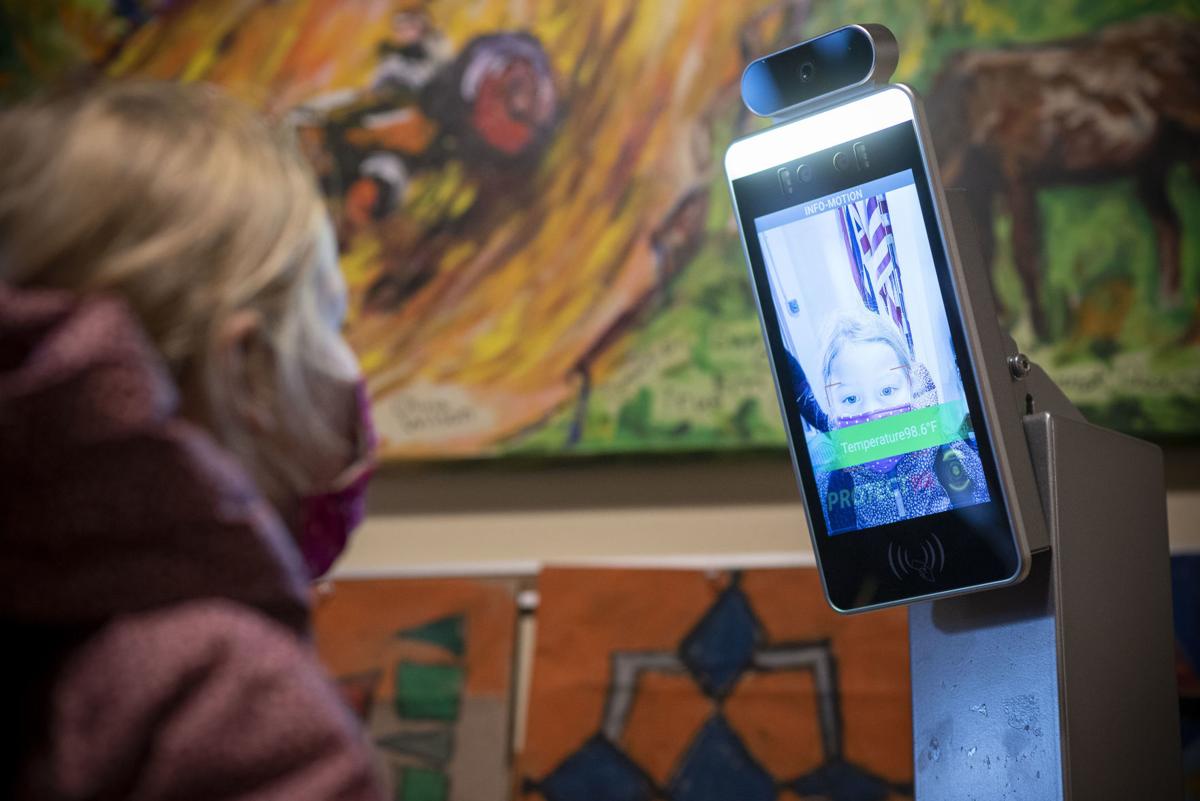 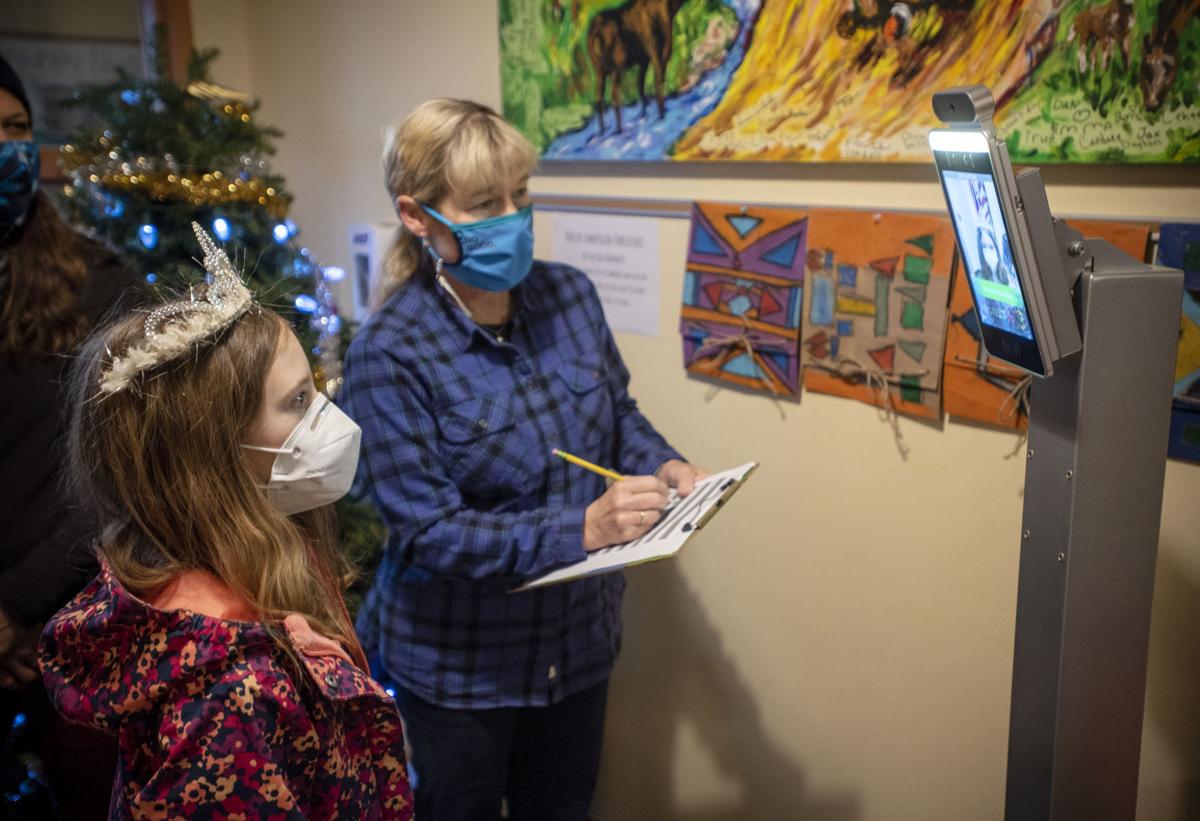 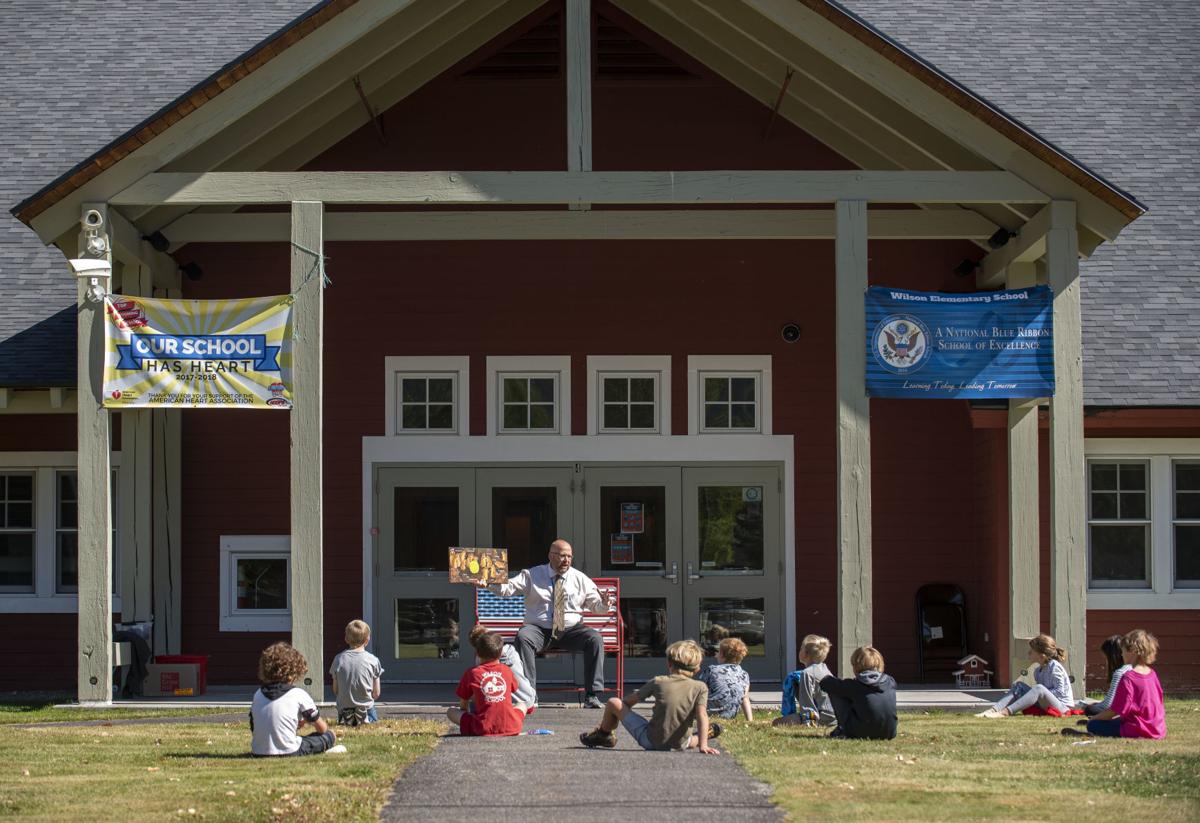 Wilson Elementary School principal Scott McDowell conducts storytime for students in late September on the school’s front lawn. Schools around the district spent as much time as possible outside last fall, including conducting band practice and classes outdoors in Crazy Creek chairs, to mitigate the spread of the coronavirus.

Wilson Elementary School principal Scott McDowell conducts storytime for students in late September on the school’s front lawn. Schools around the district spent as much time as possible outside last fall, including conducting band practice and classes outdoors in Crazy Creek chairs, to mitigate the spread of the coronavirus.

Education during the coronavirus pandemic has changed at every level — from elementary school to college, private and public. The News&Guide wanted to see how those changes are affecting students and families. This is the third and final story in our series. — Eds.

This week, Colter Dawson stepped foot in the classroom for the first time in months.

When the pandemic struck, the Jackson Hole High School junior switched to an independent study program administered through Brigham Young University. His father, Ted Dawson, said the family chose it because of the uncertainty that hung over public schools.

“With all the instability ... we wanted to homeschool,” Ted Dawson said.

Now, after an entire semester of at-home schooling, Colter is ready to return to the public high school. He didn’t mind the academics in the BYU program, but he would like to see his friends and teachers.

“I do miss the in-class aspect of being able to hang out my friends and joke around and get the real high school experience,” he told the News&Guide last week.

The Dawsons’ decisions exemplify the difficulties of schooling during a pandemic. Concerns about viral transmission have butted up against worries of virtual schooling leading to learning loss.

Though global research has shown transmission in schools has generally been low, the possibility remains, and that unpredictability has led some families, like the Dawsons, to opt for home schooling or structured at-home independent study. Other families have enrolled their children in private schools, some of which offered full-time in-person learning.

And thousands of other Teton County families have kept their students in the public school district — some by choice, some because they couldn’t afford the time or money for alternatives.

For the most part they report being rewarded with consistency under the district’s hybrid model, which splits instruction between in-class and virtual learning.

Teachers, students and parents say they appreciate having even the limited in-class time Teton County School District has built into its hybrid model.

Many students in the United States have no in-class time. While the U.S. Department of Education doesn’t track which districts are teaching in person and which don’t, according to The New York Times, anecdotally virtual education is high, especially in urban districts.

“I’m so grateful that I at least get to see them two days a week,” Jackson Hole High School math teacher Jennifer Kelley said of her students. “My friends back East are still totally virtual.”

For valley elementary schoolers the changes are less severe. They are in the classroom four days a week, with Fridays being virtual. To reduce the potential for viral transmission, they are taught in classroom “pods.”

When the 2020-21 school year began, the school board and district administration wanted to maximize classroom time for younger students, who are more prone to struggle with virtual learning and need more social interaction to help their development. The four-day schedule was settled on to give teachers time to plan and regroup and to give students the chance to learn digital literacy.

That came in handy after coronavirus exposure required entire classrooms to quarantine early in the school year, but it has also helped some families.

“The virtual Friday has been really good, because it sort of gives us time as a family to regroup,” Susie Temple, a parent of a Wilson Elementary School student, said. “It just sort of hits the pause button for the week.”

She also likes virtual Fridays because she can listen in on classes, something she normally couldn’t do. Her and her husband’s work situations — he’s on furlough, she owns her own businesses — give them time to participate in their kids’ education, though she knows that’s not every family’s situation.

At the middle and high school level in particular, such hybrid schedules carry the risk of kids falling behind or not being able to access resources like school meals.

In general these upper-grade students are separated into A and B groups, going to school in person Monday and Wednesday, or Tuesday and Thursday, and spending the rest of the week learning virtually.

With more than half their time spent at home, staying organized is key.

“It definitely forces you to take initiative on your own,” Duquette said.

The middle and high schools are on a block schedule. Students take four classes per term, with each period being 90 minutes. That’s a big departure from the seven-class schedule of previous years.

Having longer classes and fewer subjects allows students to focus on their virtual days, but it means they have more subject matter to digest during each class. In rewriting their curriculums, teachers had to balance grade-level requirements with students’ ability to retain information.

Older students have needed to learn self-efficacy skills to get the most out of their schedules. Teachers compare their classes to college courses, in which they teach concepts or skills during in-person classes, then give exercises to review on the virtual days.

“I do a lot of spiraling activities,” Kelley said, referring to homework and lessons that repeat then build on topics.

Asking students to manage their own schedules is daunting, especially because teachers have typically seen their pupils daily. Under the hybrid schedule it took longer for educators to develop relationships with students and understand their needs.

Because teachers see students only 40% of the time they used to, the at-home work is crucial. Sammi Smith, the high school’s Fab Lab teacher, said her department has always worked with students on intangibles, but this year, organization and self-motivation have been even more important.

“I’ve really been trying to make sure that my students understand those soft skills are part of this year, and the reason why it’s so hard is because we’re asking you to take that extra step as a student to be more responsible,” Smith said.

Most students, Smith said, have picked up the necessary skills. Some, like Duquette, say they like the way the schedule prepares them for college, which he called a “silver lining” of this weird year.

However, the transition has not been so easy for all public schoolchildren. Educators tell of a mix of students with varied personal challenges.

Some kids live in crowded homes and have no place to study. Others don’t have enough food and depend on school meals. If they’re old enough, students may have jobs after school to help their families make ends meet. Special-education students might need more in-person instruction.

These situations make virtual learning less than ideal. Jackson Hole High School Principal Scott Crisp told the school board in October that between 25% and 30% of his student body was “struggling” in some way.

In light of that, educators have refined how they support students to build relationships and offer extra help, whether with academic challenges, or emotional and mental health ones.

“That can include things like Zooming in with kids during their at-home day,” Hoelscher said. “I’ve also had more teachers than ever give out their cell phone numbers to kids so they can text each other.”

Another big change made to ensure fewer students struggle was bringing them back into school on Fridays, the only day of the week all middle and high school classes are at home. Whether students are having motivation problems or their hectic home isn’t conducive to studying, an extra day at school makes time for targeted interventions, teachers say.

Take what they can get

Despite the difficulties, most people are just happy to have in-person classes. Colter Dawson is excited to see his friends. Walter Duquette finds motivation in his new schedule.

For one Wilson family, the hybrid schedule offered the chance for their child to thrive. Dondi Tondro-Smith’s fourth-grade daughter, Kaia, is dyslexic and a fully virtual student this year.

Kaia was home-schooled in third grade, so she’s used to learning from home, but the family has taken this year as an opportunity to participate in the district’s offerings virtually. She has a tutor who helps her as well, which Tondro-Smith said is the perfect blend of “private and public” education.

The combination has been exactly what Kaia needed. On a recent night, she read aloud for the first time, her mother said, choosing “Harry Potter and the Sorcerer’s Stone.”

“Her dad and I were jaws open,” Tondro-Smith said. “We just couldn’t believe it, that we’ve come so far in the year.”

The family doesn’t know what they’ll do next year, though they would take a virtual option again if it were offered. Much remains up in the air, though both the school board and district administration have indicated they hope to return to full-time in-class education.

Until then, teachers and students will navigate the second semester, and whatever happens, it will be a learning experience.