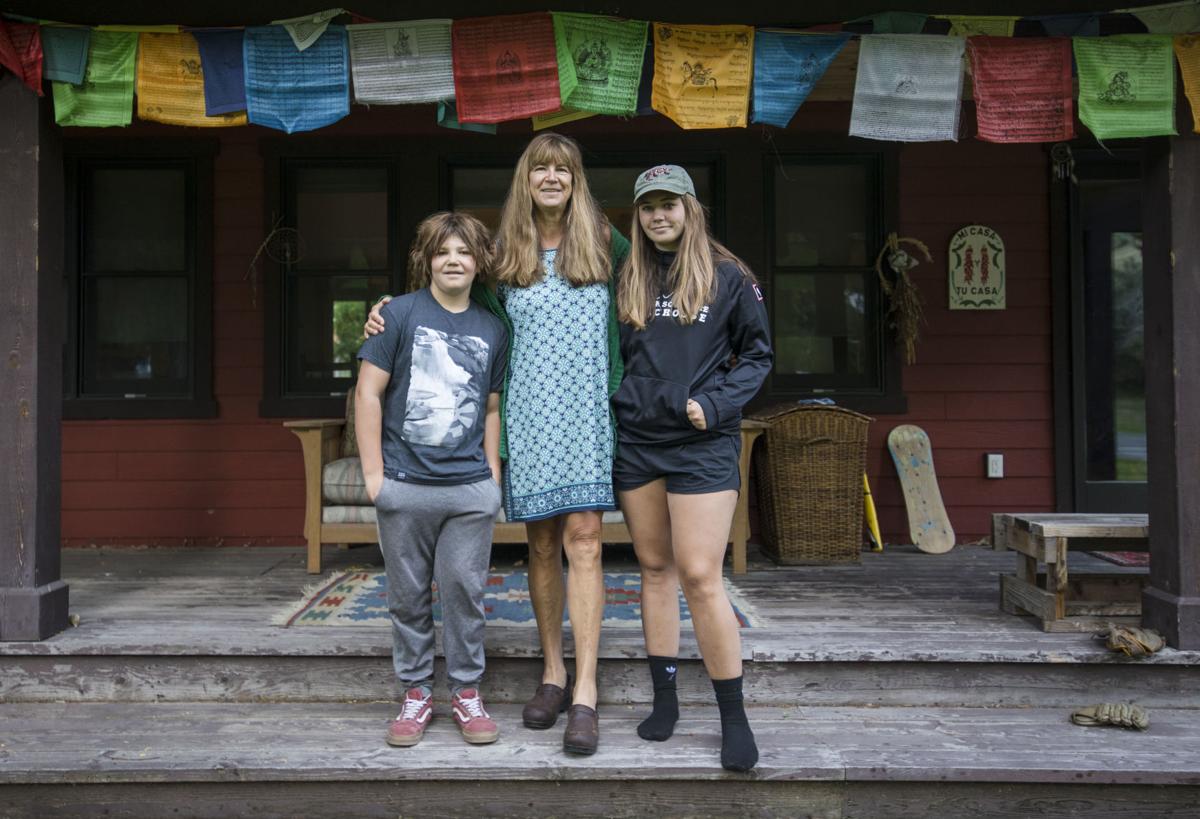 Sue Muncaster and her children, Nico Santelices, 11, left, and Mariela Santelices, 17, have faced their own set of challenges during the coronavirus pandemic. Mariela is no stranger to the discussion of mental health, winning an award at Moonshot this year about teen mental health. To blow off steam, Nico built a bike park in their backyard. 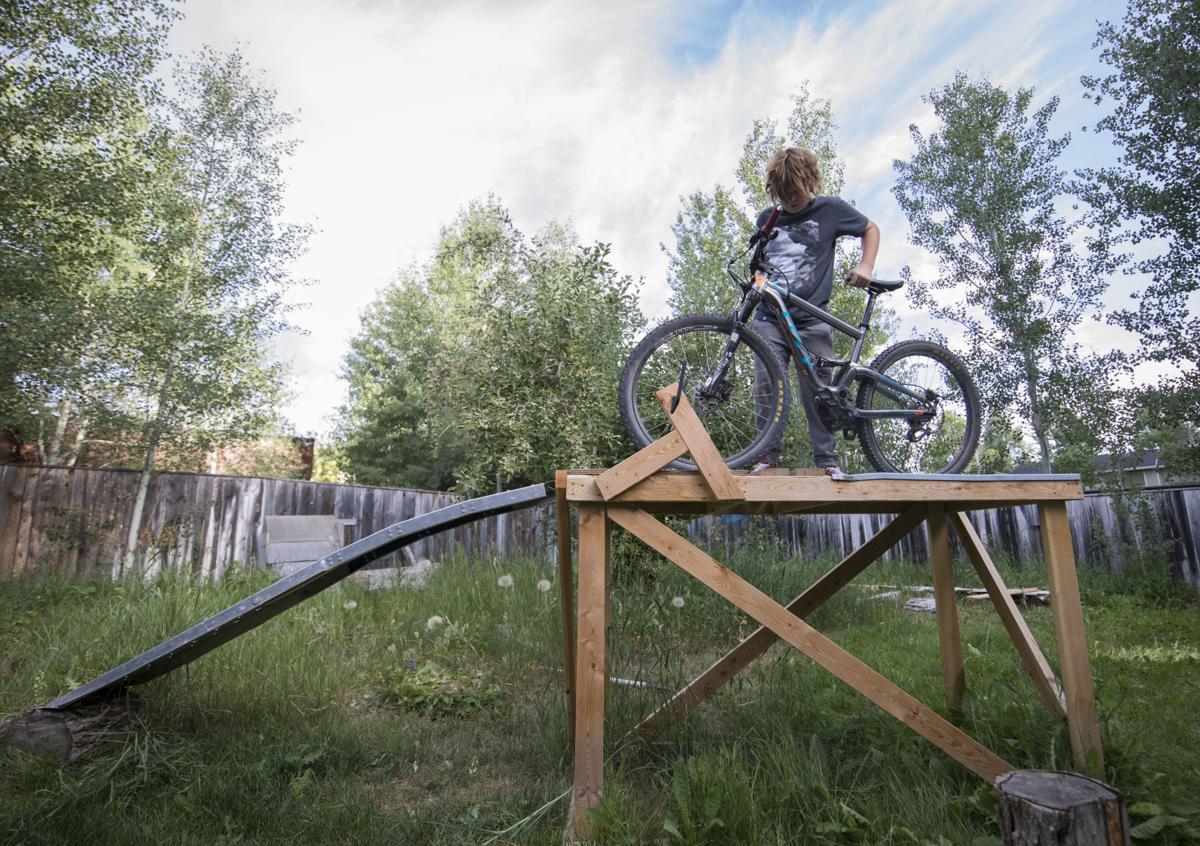 Nico Santelices, 11, lifts his bike onto his homemade ramp in his family’s backyard. He built the bike park in his free time to blow off steam during the coronavirus lockdown.

Sue Muncaster and her children, Nico Santelices, 11, left, and Mariela Santelices, 17, have faced their own set of challenges during the coronavirus pandemic. Mariela is no stranger to the discussion of mental health, winning an award at Moonshot this year about teen mental health. To blow off steam, Nico built a bike park in their backyard.

Nico Santelices, 11, lifts his bike onto his homemade ramp in his family’s backyard. He built the bike park in his free time to blow off steam during the coronavirus lockdown.

When Mariela Santelices called out of school sick in mid-March she didn’t realize that she was missing her last day of high school — and all the things that go along with it.

But those were all just symptoms that Santelices said contributed to a larger feeling of loss as the COVID-19 pandemic halted the in-person 2020 school year early, isolating youths and teens at a time when many young people needed connection most.

“I had a really hard time wrapping my head around it,” she said. “I kind of shut down. I put my head down and tried to make it through, and I really tried not to dwell on what I was missing.”

A big part of what she was missing was her peers — and not just her friends. Santelices said she missed just seeing people in school, the other teens she would run into in the hallways at the start of the day, between classes, during lunch and on other breaks.

“You don’t really realize how much social interaction you get at school,” she said. “My class is super close. It was like losing my siblings. I would spend all day with them every day, and I just — I just missed them a lot. That was definitely hard.”

Ivy Assenberg, a child and family therapist at the Jackson Hole Community Counseling Center, said that feeling has been common among the young people she has worked with during the pandemic.

Teens and young adults in general deal with mental health complications that are similar to those of adults. About 7% of children between 3 and 17 years old have diagnosed anxiety, and about 3% have diagnosed depression. Those issues can compound one another. According to the Centers for Disease Control and Prevention, about 70% of teens and children who have depression also deal with anxiety.

Assenberg said social ties are crucial for people of all ages. Belonging to a community helps young adults develop a sense of self.

“Being close to each other and mirroring and actually seeing each other plays a big part in trying to figure out your place in the world and perspective,” she said.

But when the pandemic cut that off, things became difficult, even for the less socially inclined.

“Definitely some of our introverts, they were fine staying at home and doing their thing initially,” Assenberg said. “After a couple months it was hard. The loneliness definitely came up for them.”

Adam Williamson, who oversees crisis intervention at the counseling center, said the effects of social isolation of the scale brought on by the COVID-19 pandemic are unknown.

“What we’re asking our kids to do right now is an experiment,” he said. “It hasn’t been done. Social isolation? Not going to school for six months? When was the last time that happened?”

Santelices is well aware of her own mental health — she has dealt with depression and anxiety since the start of her high school days — as well as that of her peers and her family. In February she won an award at Jackson Hole Public Art’s Moonshot 5x5 event, a program in which creatives and community members pitch projects, for a proposal to survey teens and to paint a mural daylighting teen mental health issues.

The pandemic, she said, exacerbated the things she was dealing with before social isolation.

“I definitely went into another wave of depression,” she said, adding that she thought “there was a lot of depression going on throughout the teenage community” before restrictions eased.

Santelices’ 11-year-old brother, Nico, said he sorely missed his friends during that time. Not seeing them, he said, made him feel “like I was the only person in the world.”

The siblings’ feelings have rippled through their family as they have all been stuck at home, trying to work and finish school in the same space.

Sue Muncaster, Mariela and Nico’s mom, remembered asking herself: “How are we going to get through this game?”

“It reminded me of being a young mother with babies and being like, ‘This day is going on forever, and there’s been 12 tantrums so far,’” Muncaster said.

Santelices said she and Nico started fighting. Later, she and her mom did, too.

“My mental health affected her,” she said.

As restrictions eased the family began seeing a few more people, which fulfilled a social need and improved the situation. But Muncaster has been struck by how differently families have been handling the lockdown and how difficult that has been to manage. Some families, she said, have been open to allowing kids to socialize while others have not.

“It’s hard for the kids to understand that, you know, it’s each family’s decision,” she said, “and that there’s some friends that you’re not going to see for a year, maybe.”

Santelices said the situation is tough.

“I’m sad for what we could have had,” she said. “We all just have to figure out a way to move on and try to deal with this pandemic in the best way that we can.”