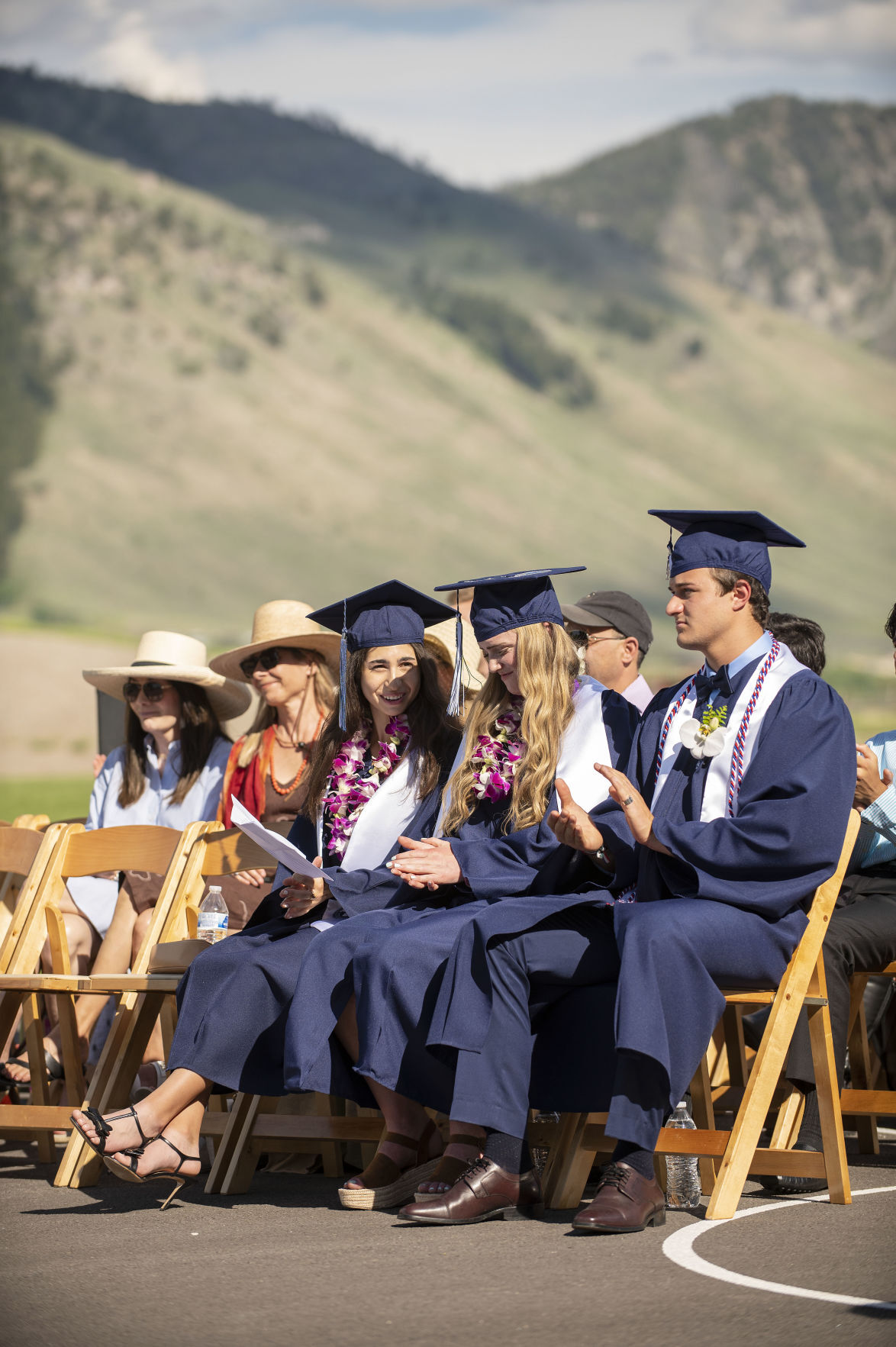 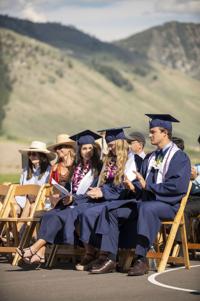 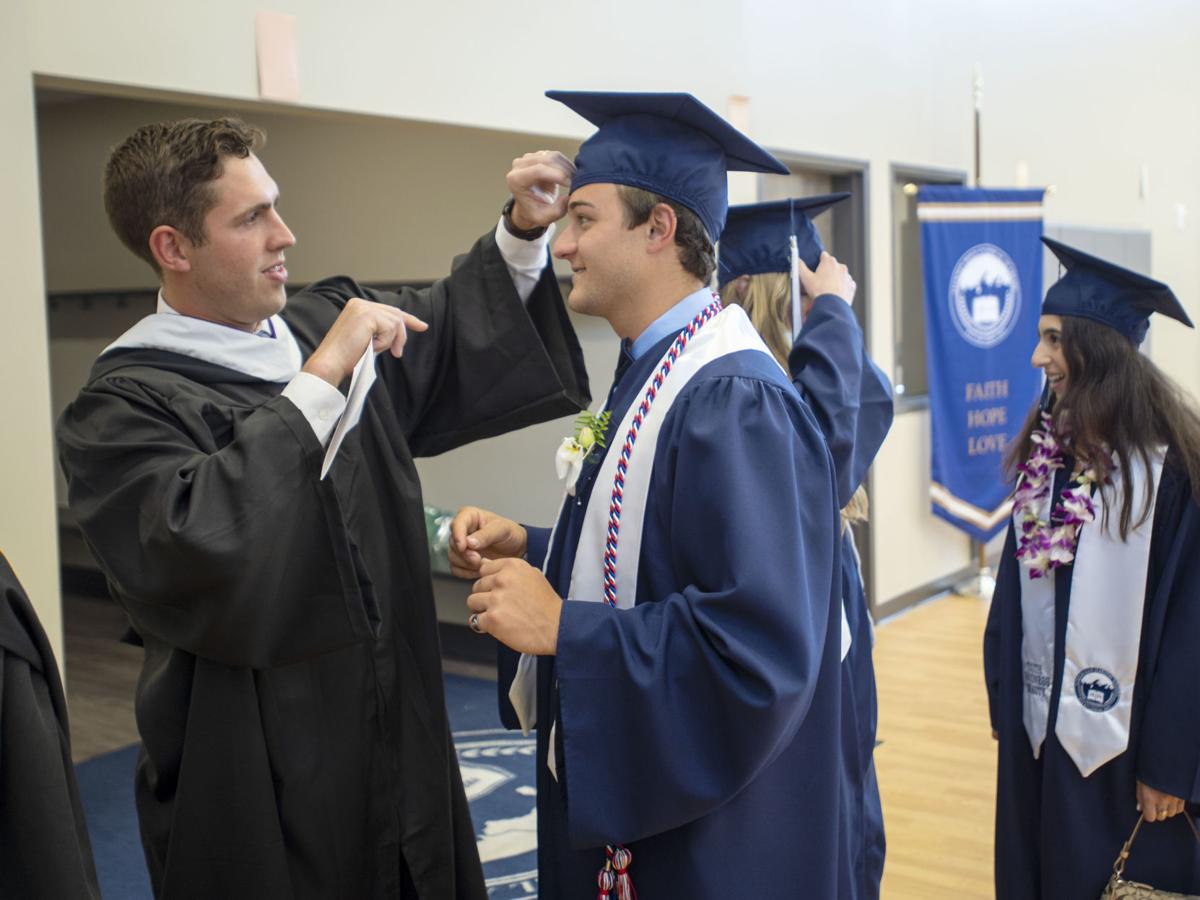 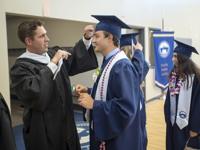 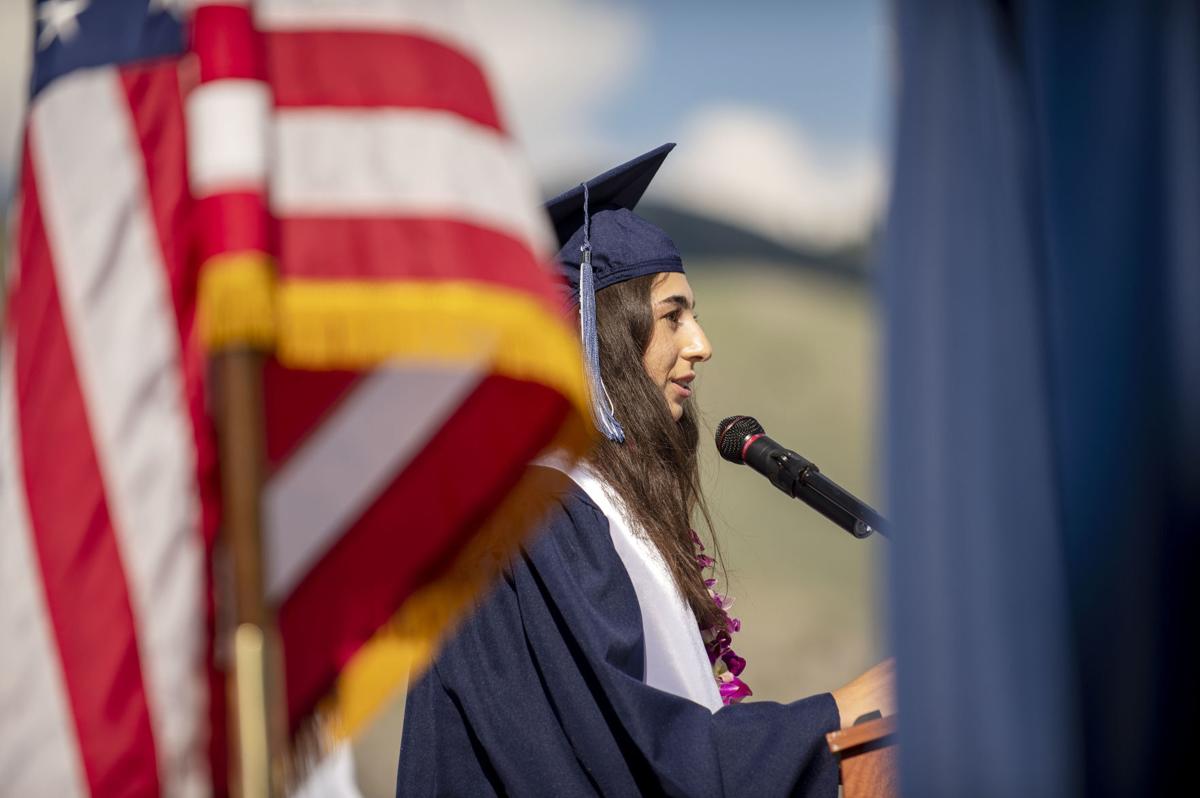 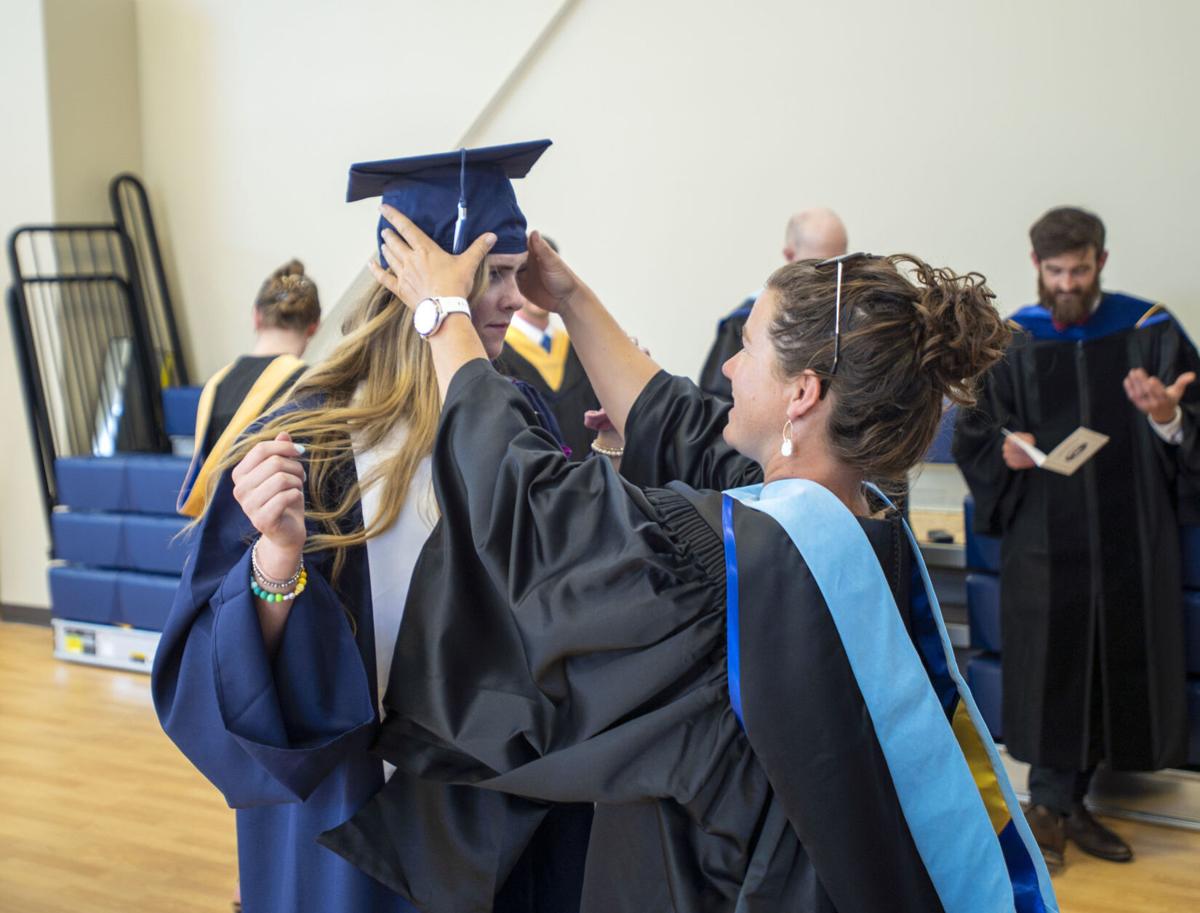 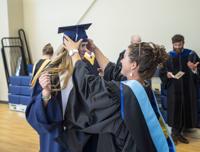 Family and friends gather at the Jackson Hole Classical Academy on Friday for commencement ceremonies of the school’s first graduating class.

“Having that personal connection and learning every subject in so much depth changed everything.” —Jacqueline Neishabouri, graduating senior

The Jackson Hole Classical Academy had just three graduating seniors this year, the first students to ever graduate from the private Christian school.

“It is only the three of us. In other words, the tripartite soul; the main Kardashians; the Powerpuff Girls (since Pete is the honorary girl); the Trinity; Zeus, Poseidon and Hades; Snap, Crackle and Pop,” said graduating senior Jacqueline Neishabouri, who spoke at the Friday commencement on behalf of her classmates because she’s been with the school for the longest time.

Neishabouri joined in sixth grade, Peter Cook came in the seventh and Samantha “Sammie” Fairbanks transferred in after a year and half at Jackson Hole High School.

“This posse has been through the ups and downs of the pandemic,” Neishabouri told the assembled crowd.

Sitting shoulder to shoulder in matching navy gowns and caps, the inaugural class took up just three chairs in the right front row.

Robby Kuhlman, the academy’s founding headmaster, presented the graduates with three words to live by: “Magnitude, fortitude and gratitude.” Then he gave them one last Latin test, seeing if they could parse the meaning from each word’s roots. The young scholars rolled their eyes and gamely obliged.

History and language teacher Laura McMillion introduced Fairbanks with a passage from Proverbs, reciting, “the heart of the wise makes a speech judicious and adds persuasiveness to his lips.” The teacher also gave three attributes for Fairbanks: adaptability, reliability and good taste.

For Cook, formally Peter Smith Cook III, it was Proverbs 22, “a good name is more desirable than great riches, to be esteemed is better than silver or gold.” More than anything, math and science teacher Kirby Feaver wanted to celebrate Cook’s integrity.

“You are respectful and honest, both with your peers and your instructors. You’re a good friend. And there have been times this year as the only male in the class, I’m sure that friendship has been tested,” she said with a laugh.

Before the ceremony, Cook said he loved the one-on-one attention the Classical Academy provided him, a sentiment the other graduates echoed.

“Having that personal connection and learning every subject in so much depth changed everything, like, made me who I am and made me love to learn,” Neishabouri said.

Fairbanks, who was often bored at the public high school, found an inspiring vigor in the private program.

“It wasn’t perfect, but it was definitely the right thing for me at the time. The skills that I’ve learned have definitely changed me for the better,” she said.

In high school Fairbanks danced and played tennis. She also loved theater, backcountry skiing and mountain biking. When she was cast in her first Off Square Theatre Company production, she said, “it was honestly pretty life changing. It was nice to find a place where I was like, ‘Oh, yeah, this is where I belong.’”

She’s headed to Utah State University in the fall to study interior design.

Neishabouri was Fairbanks’ tennis teammate for a brief stint, and she said they used to call themselves “thug buddies” for their matching pink sneakers — though Fairbanks doesn’t remember it exactly like that. After a year on the courts, Neishabouri switched to golf and thrived on the greens.

Already she’s played in two state competitions and on the banks of Scotland. In two weeks she’s headed to the 2021 High School Golf National Invitational in Pinehurst, North Carolina. She plans to continue with the sport in college at Wesleyan University, where she’ll pursue a major in economics and a minor in informatics and modeling.

She would love to get her master’s from Harvard Business School and start her own company.

Also looking to make it in the business world is Cook, who plans to attend Montana State University to major in business management and finance.

During his Jackson Hole winters he immersed himself in the backcountry, first by skiing, then with snowmobiles.

“It’s loud with your sled, but there’s a peace just being in the wilderness with four of your buddies,” he said, adding that while he’s eager for a change of scenery, the mountains will always hold a special place in his heart.

Head of School Polly Friess gave the opening remarks Friday, celebrating the students and faculty and remembering her late father-in-law, billionaire philanthropist Foster Friess, who died May 27. In her comments she said emotions are “still a bit raw” from his passing, but that his generosity lives on in the fulfillment of the school.

“Foster helped this school come to life. And he was passionate about bringing beauty, wisdom, virtue, knowledge and the love of God to young men and women and equipping them to reflect His love in all their endeavors,” Kuhlman said later in the ceremony.

When the graduates finally turned their tassels, Polly Friess beamed with pride.

“You’re the ones that pioneered our path, and you did a great job. Thank you. We’re so proud of you.”