My beloved wife of 33 years, Lou Breitenbach, died after a very brief illness. She would have turned 84 in less than two weeks, a fact I mention because Lou encountered a soothsayer while on a trip to Nepal in 2003 who told her she would live to the age of 83.

I don’t know if Lou took that prediction so much to heart that she felt fated to die before her birthday, but you all know she was strong-willed enough to do anything she put her mind to. At the end, her will was to remain at home and die with me by her side. And so she did.

She always wanted people to call her Lou, but in the context of an obituary she would insist on identification by her full name and title: Mary Louise McGraw Breitenbach, M.Ed.

That master’s of education degree, in counseling and consulting psychology, came from Harvard in 1983. Lou would insist her obituary refer to her degree from Harvard. Did I mention she was a Harvard grad?

Lou’s career as a psychotherapist spanned 35 years. She worked at Van Vleck House and Curran Seeley but spent most of her professional years in private practice. Lou drew deeply from her own experience growing up in a family of abusive alcoholics, and concentrated her practice on family therapy and substance abuse counseling.

Today, a child with a family situation like Lou faced usually attracts the attention and assistance of child welfare agencies. But in the late 1940s, Lou engineered her own escape from her horrific birth family by finding refuge with a series of self-selected surrogate families, the first time at age 13.

During her senior year at Russell Sage College in Troy, New York, Lou got pregnant. She was not allowed to attend her graduation because of her “condition” but was awarded her degree. Lou delivered twins, a boy and a girl, in December 1958 but surrendered them for adoption at birth.

Lou met Bill Briggs in 1959 and traveled with him to climb the Tetons that summer. Lou was soon immersed in the valley climbing community, living at the Grand Teton Climbers’ Ranch and befriending all the stars of the scene, though she never joined them on the crags. One particular young mountaineer, Jake Breitenbach, caught her eye. They married in 1960. Tragically, Jake died in 1963 while attempting to climb Mount Everest.

Lou turned that loss to a gain when, as she told the story, she approached Mardy Murie, whose husband, Olaus, died shortly after Jake, and said, “We have something in common. Our husbands both just died.”

They shared a wonderful friendship until Mardy’s death in 2003.

Even with Mardy as a surrogate mother, Lou continued to struggle with the effects of her abusive childhood. Without a doubt, that trauma affected her entire life.

In the late 1960s or early ’70s, she met Phil Zimmers, then rector of St. John’s Episcopal Church. Zimmers offered to let her live on the church grounds, a kindness that Lou often credited for saving her life. She lived at the church rectory for seven years, and she remained a devout member of St. John’s congregation to the end of her life.

In 1972 Lou bought an acre of land along a stretch of what was then just starting to be called the Village Road. It came fitted with a 1920s log cabin that had been moved from Red Top Meadows. Even in 1972 the place was what some observers of real estate today would call a “scraper.” The subdivision road did not yet exist, so Lou simply pulled well off the shoulder of the road and walked back to the house.

In the 1980s, Lou began a 10-year-long effort to reconnect with her children. She finally located them, and in 1993 her daughter, Cary, responded with a letter. Cary and Lou met several times over the subsequent years.

Cary’s brother, Douglas, also chose to reconnect with Lou, and in 2014 he gave Lou a job title she never expected but was pleased and proud to carry: grandma to Douglas’ son, Marshall. Lou and Douglas hoped to meet in person this year, but ... COVID.

A mutual friend introduced me to Lou at the 1986 Sweethogs and Swinehearts Ball. She proposed marriage to me less than three weeks later. It was some months before I accepted, and we married in 1987.

For many years I was as likely to introduce myself as her husband as to use my name, because by the time I met her Lou was both renowned and notorious. She really did do some scandalous things, and if she was still here she would want me to tell her story, warts and all.

But in 2020, who needs any more reminders that people can sometimes treat others remarkably badly? Instead I’ll remember how much Lou valued connections and relationships and how much work she did to maintain them.

When we married, Lou immediately merged all the names in my address book into hers, adding a paltry couple of dozen names to the 800-plus already on what she called “The Christmas Card List.”

Work on the cards began early each September and required a handwritten note in each card for each person or family on the list, with each envelope hand-addressed. Lou considered it bad form if every card wasn’t mailed by the end of November. I don’t know how many years Lou had been doing that before we met, but she mailed cards every year after I arrived until 2019.

Lou had hoped her body would be used by students at the University of Utah School of Medicine for their human anatomy studies, but cadaver donations are not being accepted right now, so she will be cremated instead. A service was held Sunday on the lawn at St. John’s Episcopal Church. 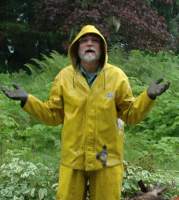 "The Lady that's known as Lou." Robert Service should have met her. I was fortunate to. RIP Lou.