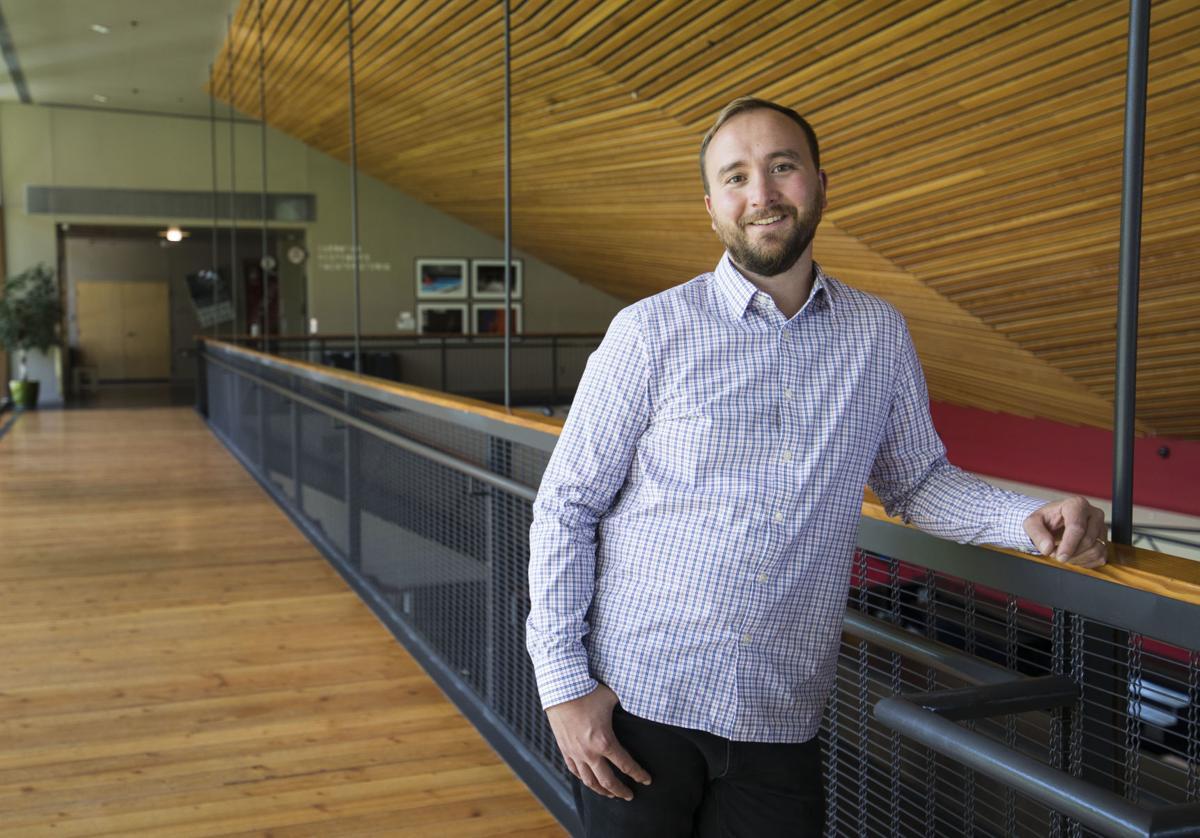 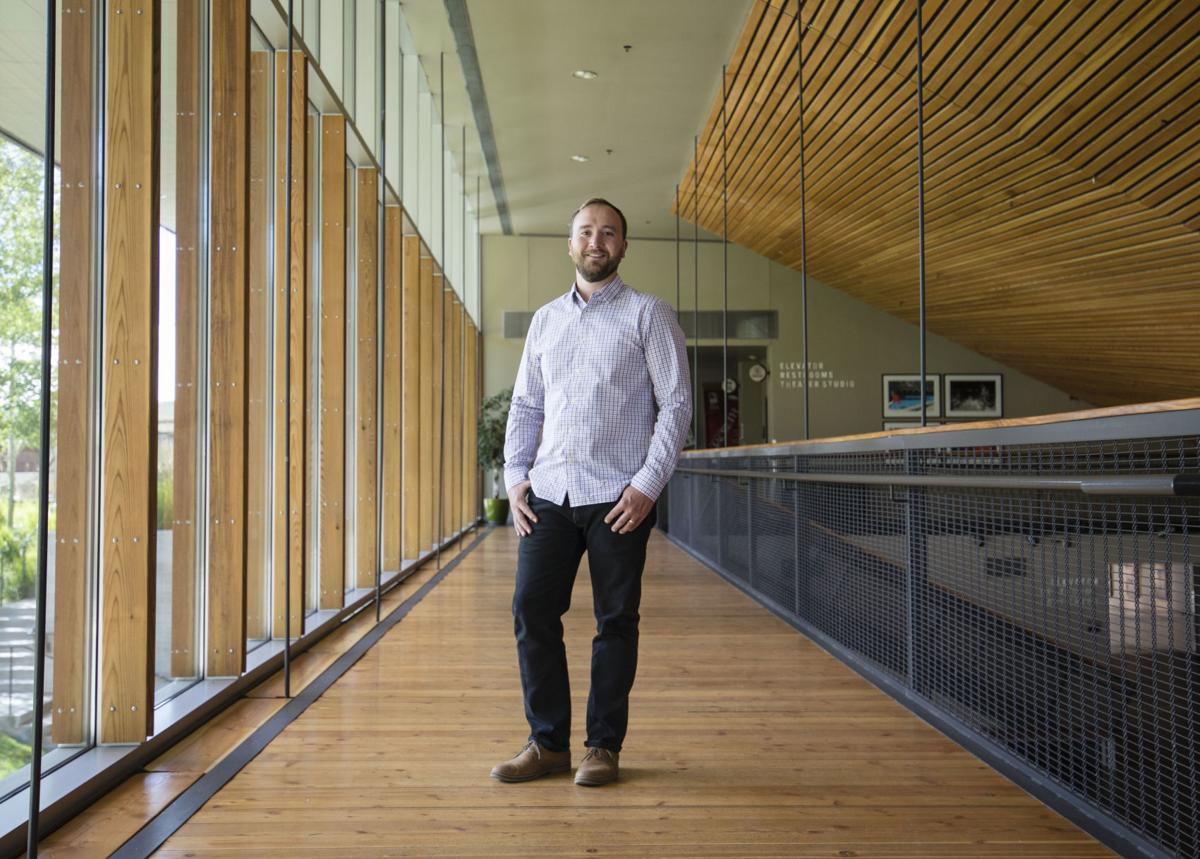 Marty Camino, the Center for the Arts’ new executive director, can’t pinpoint exactly when he was first captivated by music, but he thinks it might have been in high school, when he bought that beat-up guitar from a local pawn shop.

“Music was kind of the one thing I was really passionate about while I was a teenager causing trouble in a small town in Wyoming,” he said.

Camino remembers being surrounded by music in his hometown of Buffalo. Whether it was taking piano and drum lessons or leaning into his family’s Basque roots through song and dance, Camino’s musicality felt predestined.

By high school Camino started finding his own groove. Maybe his pawned guitar declared the rest of his life history, but Camino thinks it was most likely his high school music director. The jazz choir desperately needed a bass player, and Camino, a kid in search of a musical outlet, fit the bill better than anyone else.

“The guitar wasn’t totally doing it for me,” he said, “but there was just something about the bass that I found really interesting.”

Somewhere in the muck of classwork, Camino taught himself how to play the bass and read music in a high school practice room.

“I had a group of friends who were also into music, so we would have jam sessions on the weekend and after school,” he said.

A few years later, after getting a bachelor’s degree in music performance from the University of Wyoming in 2008, Camino got as far away from his Wyoming heritage as possible. With bass in hand, Camino boarded a cruise ship on which he played his trusty instrument for passengers seven nights a week. Aboard the ship he sailed from Alaska, down the West Coast of the U.S., Mexico and Central America, through the Panama Canal and throughout the Caribbean.

“As a young musician,” Camino said, “I would say this experience was incredibly good for my chops.”

Through playing in front of a large audience, Camino “learned the craft of performance,” specifically how to handle mistakes in front of crowds.

“It was kind of like ‘Groundhog Day.’ You wake up and it’s the same routine,” Camino said. “You’re playing in the same lounge with the same band at the same time every night.”

But cruise life wasn’t sustainable, and Camino’s interests had begun to shift, anyway. As he started booking his own shows and doing some promoting, and he became increasingly intrigued by the administrative side of music.

So when his fiancee, now wife, Hilary, got into a music therapy program at the University of Edinburgh, Camino thought, “I shouldn’t let her have all the fun without me.” He tagged along and enrolled in the university’s Music in the Community program.

“It was a unique hybrid program that included administration and training, but also practical skills like booking concerts and putting music events together,” he said.

At first, Camino said, he didn’t know how he would make a career out of his passion for music, but through his studies at the University of Edinburgh he found pleasure in the managerial side of the arts.

Camino felt like he and his fiancee were finally settling down, but plans to stay in Scotland longer than invited were squashed when their visas were curtailed out of the blue. With no plan, the two, who both have family in Wyoming, decided to seek comfort in what they already knew: the Rocky Mountain region.

“We liked the idea of getting back to where we would have a support structure and be around our families,” Camino said.

As they scrambled to fit the pieces of their lives together, Camino remembered their homecoming “turning into a bit of a race between us.”

“Whichever one of us could get a job in our fields first would determine where we would move and establish our lives,” Camino said. “That ended up being the job at the Grand Teton Music Festival for me, and Jackson Hole for us.”

Once Camino made it to Jackson in 2013, he knew he had made the right decision. His career path, once unclear, crystallized before his eyes, and Jackson began to feel like home.

“Jackson is the most Wyoming place I’ve ever lived, simply because it has that work-hard, play-hard mentality — get out and enjoy the open spaces. I love that,” Camino said. “That’s 100% Wyoming.”

After five years at Grand Teton Music Festival as director of operations, Camino was ready for another change, but he still wanted to stay involved in Jackson’s arts community. As 2018 rolled around, Camino was hired as director of event services at the Center for the Arts, spearheading the center’s scheduling and overseeing front-of-house operations. Then, this past August, he was promoted to executive director.

Director of event services proved “a natural segue into taking charge of overall operations,” Camino said. “I take a lot of pride in this position, especially during this year and the challenges arts organizations are facing.”

In his new role, Camino hopes to honor those who invested time and money in the center’s construction as well as to empower the center’s staff “to do what they do best” — spreading the joy of music throughout the valley.

With a halt on all large-scale, in-person gatherings due to the coronavirus pandemic, Camino and the center have completely revamped their business model, which once hinged upon face-to-face interaction.

“Our whole way of life has been completely wiped away, but we look forward to the time when we can get back to normal,” Camino said. “This is a challenge, but it’s part of the opportunity — what’s exciting about the job. Any sort of playbook of how we’ve done things in the past is completely out the window.”

But the show must go on, and Camino is ready to keep playing — sometimes even strumming his own tune.

“From the first day I got to Jackson, I was really interested in performing and keeping that side of myself alive,” Camino said.

And after seven years in Jackson, his commitment to performance remains, as does his enthrallment by his instrument because it’s “such an integral part of every type of music.”

In the Teton region he plays in a variety of groups, ranging from the Idaho Falls and Wyoming symphonies to Jackson bluegrass band One Ton Pig — what Camino called “a longstanding staple in the Jackson music community.”

Although Camino has stayed in touch with his classic music training, he believes he’s “a jack of all trades, master of none.”

“I love the idea that I can play all these types of music,” he said. “Having all those outlets, it’s important to me.”

And, Camino said, staying on top of his craft provides him unmatched insight into his professional career.

“It’s really important to me personally and professionally,” Camino said. “Thinking about my job now at the center, staying in touch with that artistic side informs the decisions I make as an administrator.”

When Camino isn’t working he’s probably playing the bass. Or you can find him spending time with his two young daughters.

Looking to the future, Camino hopes to keep doing what he does best: playing with One Ton Pig and showcasing his passion for music through Teton County.

“I’m really committed to serving the arts in my home state,” Camino said. “I’ve found an incredible avenue to do that here in Jackson.”