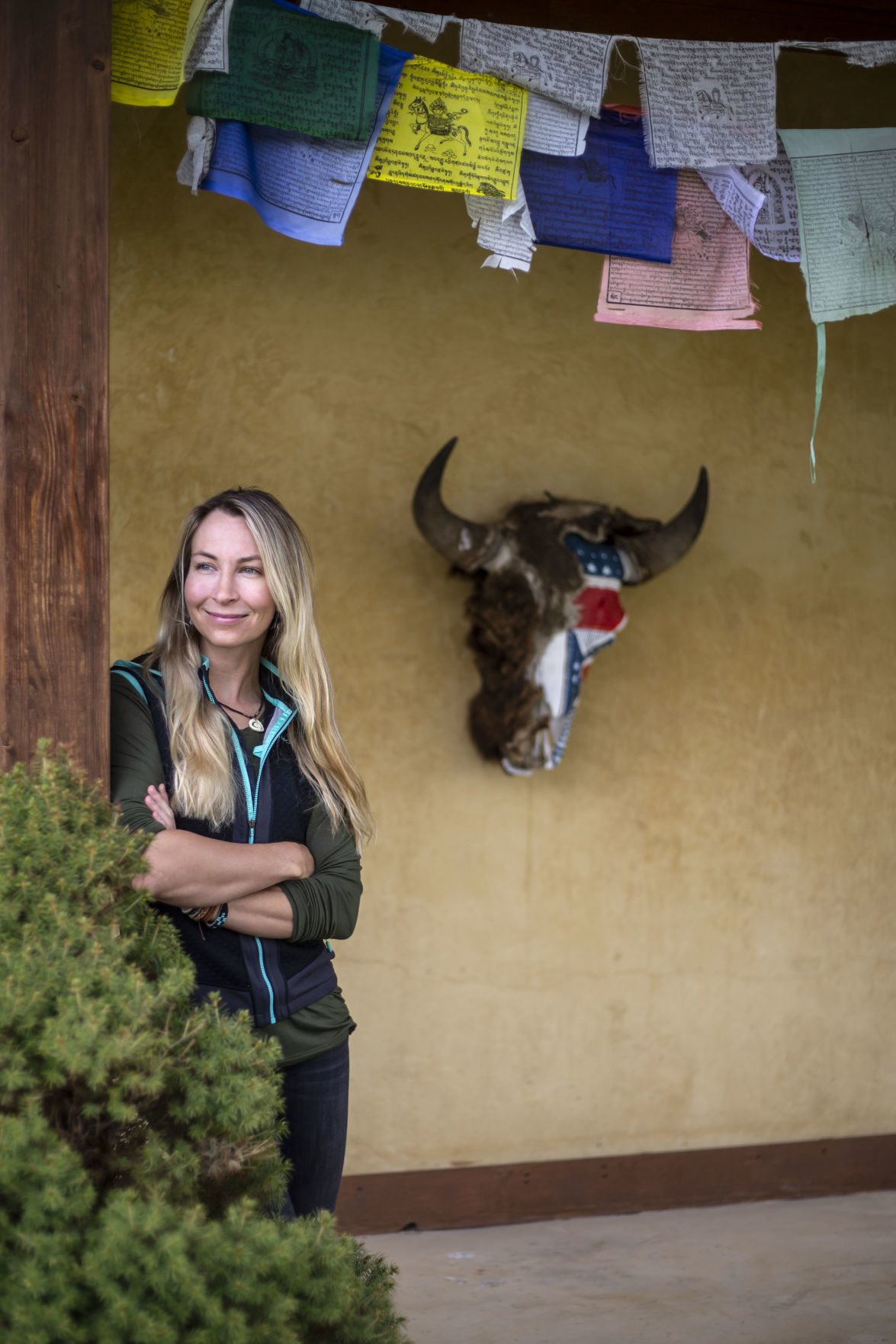 Kelly Halpin was raised exploring the woods on horseback near Lost Creek and has since made a career as an illustrator and mountain athlete. 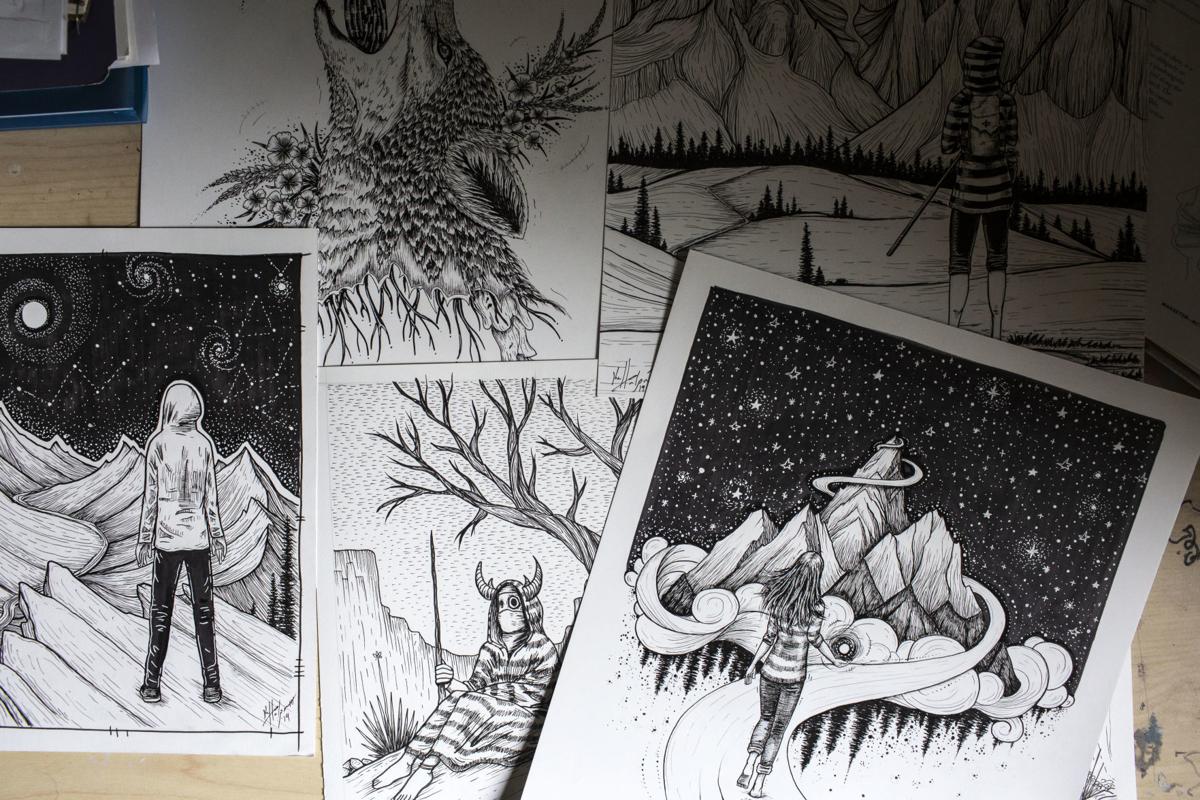 Some of Halpin’s work sits on her desk at her home studio. Her clients range from companies like Melvin Brewing and Jackson Hole Snowboarder Magazine to national outlets like Powder magazine and ESPN. 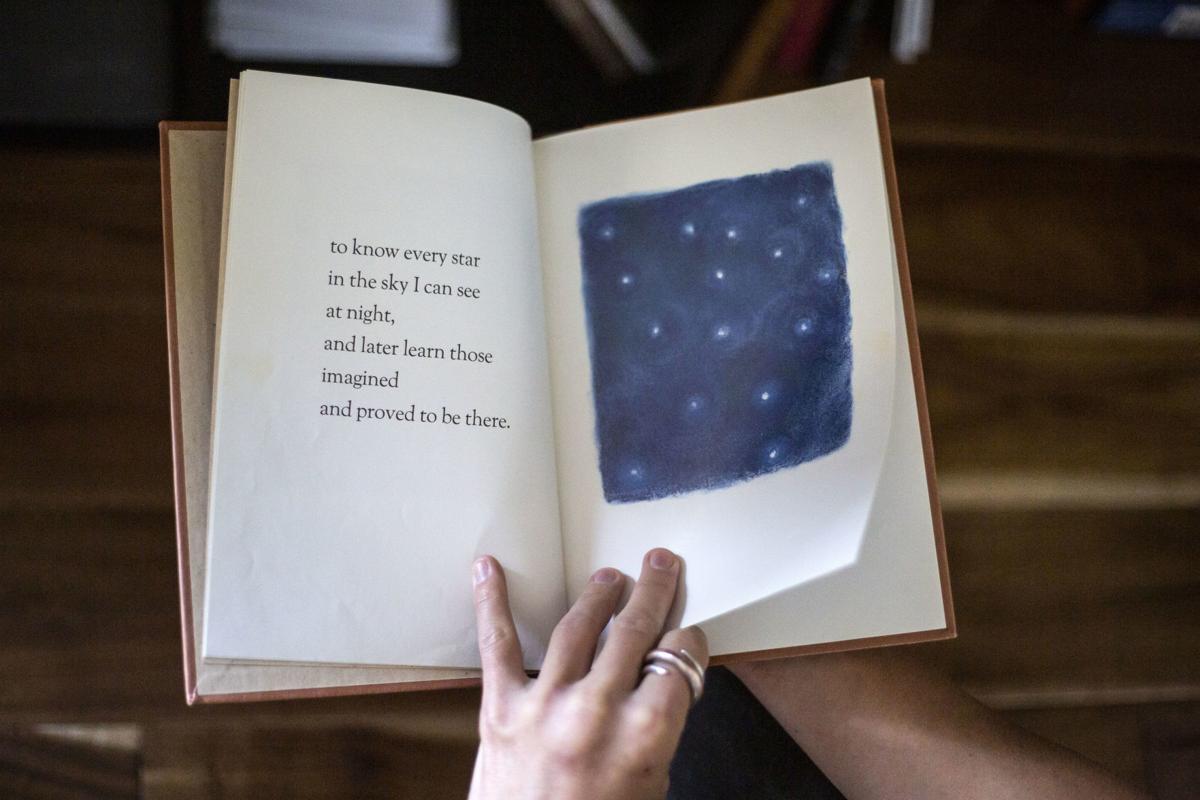 Halpin shares a favorite line from M.B. Goffstein’s children’s book, “School of Names.” Halpin is finishing her own children’s book that she wrote and illustrated.

Kelly Halpin was raised exploring the woods on horseback near Lost Creek and has since made a career as an illustrator and mountain athlete.

Some of Halpin’s work sits on her desk at her home studio. Her clients range from companies like Melvin Brewing and Jackson Hole Snowboarder Magazine to national outlets like Powder magazine and ESPN.

Halpin shares a favorite line from M.B. Goffstein’s children’s book, “School of Names.” Halpin is finishing her own children’s book that she wrote and illustrated.

Mountain athlete and illustrator Kelly Halpin knows Grand Teton National Park like the back of her hand, but she is always looking for new challenges for her body and mind.

The 12-and-a-half-year-old Jack Russell-husky mix has been up Jackson Peak and climbed all the peaks in the La Sal Range alongside her intrepid owner, whose accomplishments as a trail runner, climber and snowboarder are extensive.

When Halpin was little, she spent any time of the year she wasn’t in school at Lost Creek Ranch, her grandparents’ property near Moose. Her parents would let her go outside from 7 a.m. until dark, and she would spend all day in the woods, climbing, biking and horseback riding.

“I attribute everything to growing up in the woods here,” she said.

She learned to love this region and challenge herself in its nature from a young age. Climbing, hiking, snowboarding, she did it all. Eventually she discovered mountain running, which combines climbing, hiking and running into one sport. This year, as the summer kicks in, she’s training to accomplish her next goals and has been researching new mountain linkups that have never been done before or never been done by a woman.

Halpin’s constant effort to push herself to new ends and extremes applies not only to her body but to her creativity. Her artistic side is inextricable from her athletic accomplishments.

The walls of Halpin’s living room in her Jackson home are covered with artwork made by her friends. In the corner of her living room she keeps her bookshelf with her favorite books from her childhood. Growing up, she remembers being immersed in these stories.

Halpin has illustrated five children’s books, one of which, “Albi and the Whitebark Pines,” she wrote. She is writing and illustrating two new books.

Halpin appreciates the power and simplicity of children’s books and pushing herself to be creative within the genre’s length constraints.

She has always loved to draw, but it was during her time studying film at the Art Center of College and Design in Los Angeles that she began to consider it seriously. Illustration was a way for her to tell stories without needing an entire film crew: just her, a pen and a piece of paper.

Her favorite medium is pen and ink. More specifically, micropens on fine-art paper. Occasionally she likes to mix in paint to stretch her boundaries. Halpin isn’t the type of person to stand still and be satisfied with what she has already done, athletically or creatively. She wants to try to become better at working with paint and to create larger-scale projects.

Her illustrations usually depict subjects inspired by nature but a little removed from reality.

“I like whimsical illustrations,” she said. “I like surreal, but with just enough reality, just enough disbelief.”

Halpin keeps a dream journal, in which she recounts the dreams she remembers vividly almost every night. Often her ideas for illustrations come from the journal.

In 2013 she did a series of illustrations for a show called “The Dream Series,” in which each illustration was based on one of her dreams.

“Every time I go to bed, I wonder, ‘Oh, my God, where am I going tonight?’” Halpin said. “Because I always go somewhere crazy.”

One of Halpin’s most recognizable illustration projects is something most Jackson locals are familiar with — the character illustrations for Melvin Brewing.

“There’s sort of a glass ceiling with women in a lot of sports.”

Halpin said that when it comes to women and wilderness, people are often more concerned or cautious about them than they would be about men, and that subtle, constant pressure can amount to big differences over the course of a lifetime.

“As that snowballs throughout your life, generally there are less women doing big, gnarly, riskier mountain objectives than men,” Halpin said. “I’m very comfortable within my own risk margins. And it feels good if other women see me do that. If I can set an example, for other women to be like, ‘Oh, OK, it is doable.’ I feel like it opens the door for more women to do other things.”

On her Instagram account, which has over 16,000 followers, she often receives messages from other female athletes who come to her for advice on how to start out in mountain running, and she enjoys giving them advice.

“I’m more drawn to things where you’re alone, self supported or unsupported in the wilderness, because that just feels very real to me. And I know that generally speaking, there aren’t as many women doing that. So I’m not exactly sure what that means. I’m just comfortable doing that stuff.”

Halpin is also adamant about doing things herself, self-supported. When it comes to breaking an all-time record with support and breaking a personal record, self-supported, she always chooses the latter.

“I feel the most alive in those situations. So it’s very true to me; it resonates with me. I like to be as close to what more primal humans were experiencing.”

With her authentic, true-to-nature adventuring spirit, there are also risks. When it comes to her most dangerous adventures, she doesn’t even tell her family before she leaves because she doesn’t want them to worry.

One of Halpin’s riskier moments happened when she was climbing in Greenland and she made her way across a gully only to suddenly find herself above a hanging snowfield with a storm fast approaching. She decided she didn’t want to bail and go to the ocean — she wanted to continue on her run.

That’s when she ended up on a moss-covered face of loose rocks.

“Everything started moving underneath me and I chucked myself onto this ledge,” she said. “I was completely by myself, 20 miles away from the nearest town in Greenland. I had, this whole moment where I was like, ‘Oh, my God, I am alone in one of the most remote places in the world while this whole rock face slides underneath me.”

Despite the fright, she made it back to safety. And though there’s danger, it comes with the territory and is part of the reason Halpin does it in the first place.

“It just feels like the most truthful experience in life.”