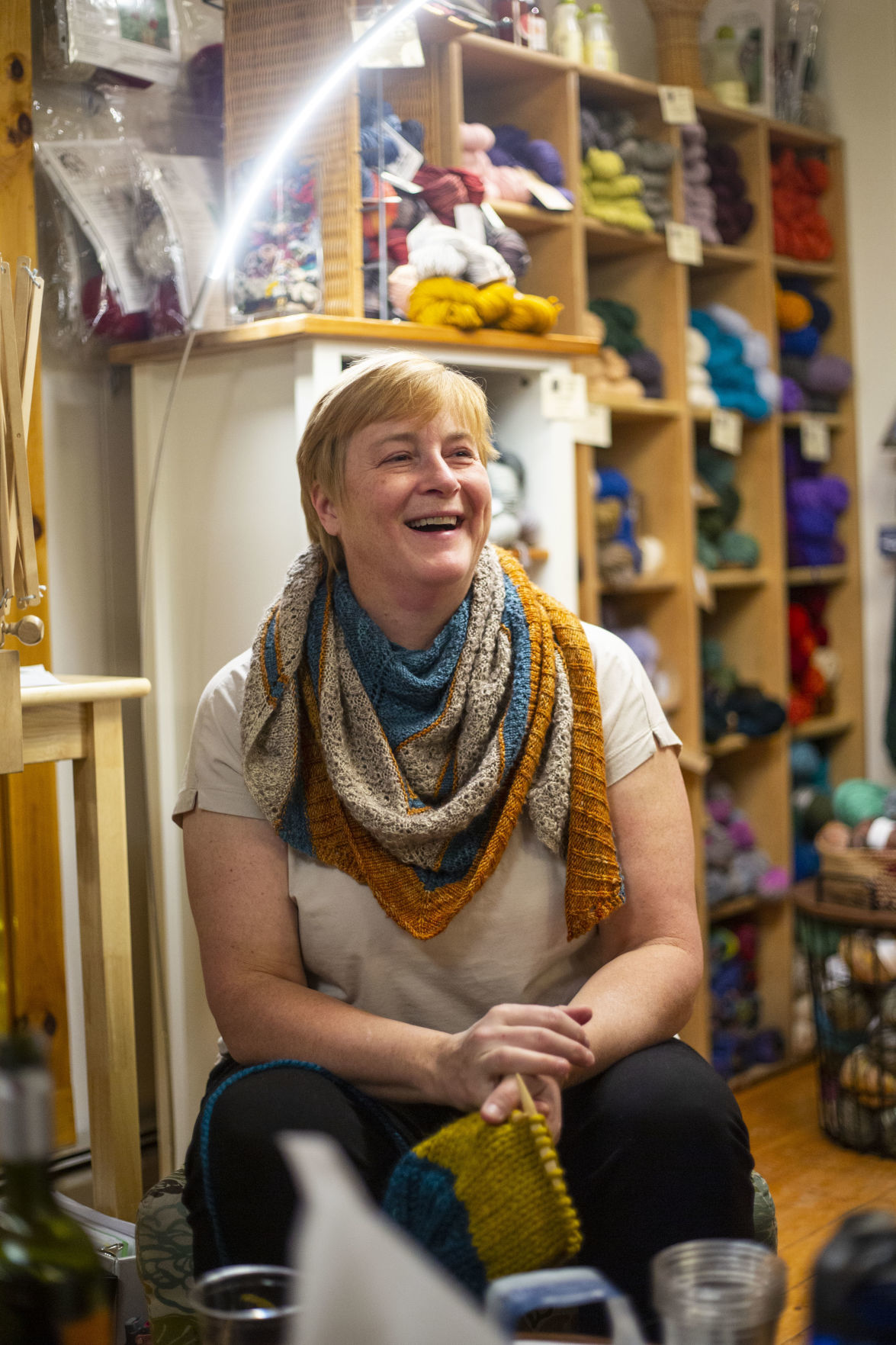 Carolyn Little enjoys the company during a weekly Thursday evening Knit Night at Knit on Pearl. 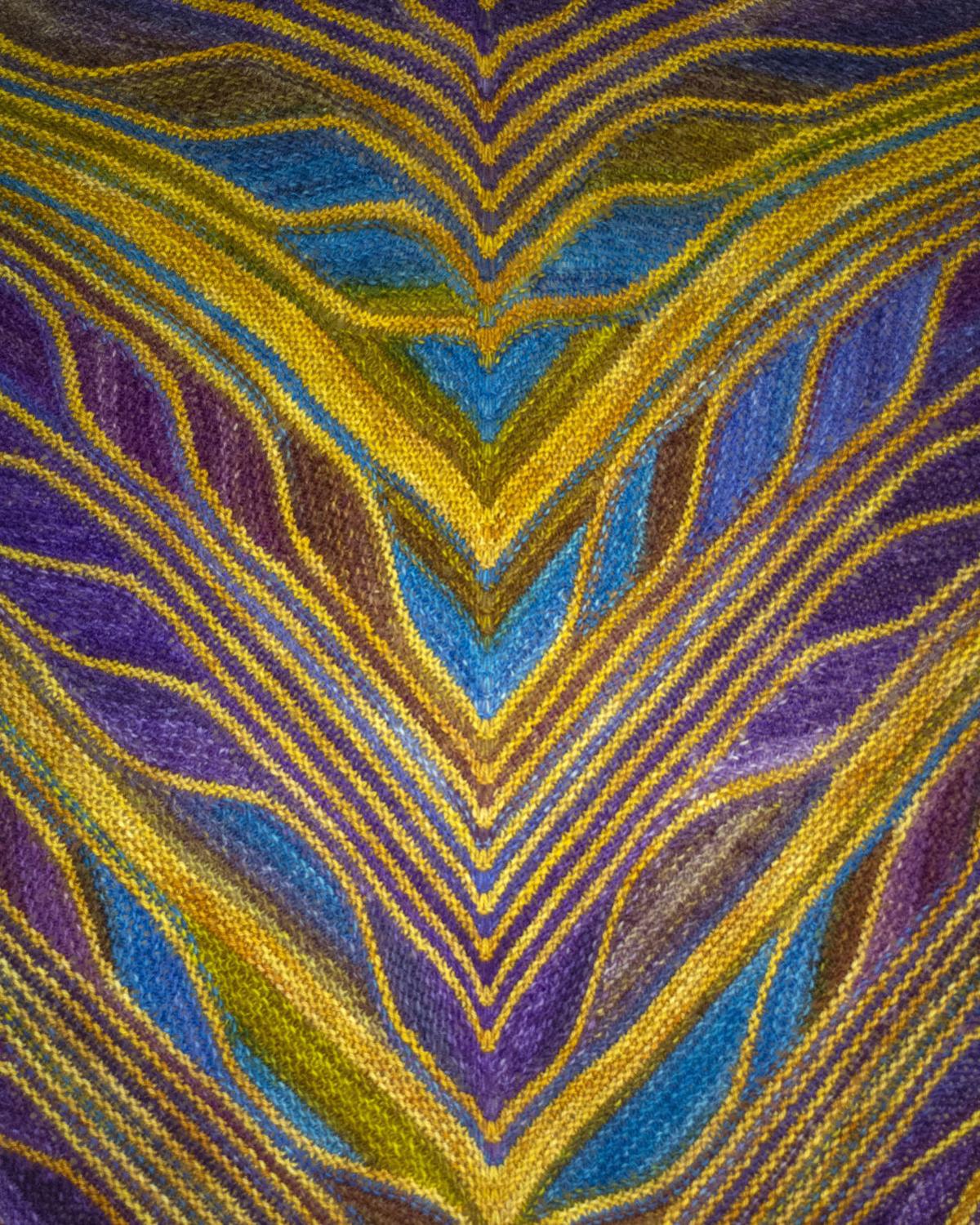 Little’s blanket that won the 2019 Teton County Fair’s Best in Show ribbon is on display at Knit on Pearl.

Carolyn Little enjoys the company during a weekly Thursday evening Knit Night at Knit on Pearl.

Little’s blanket that won the 2019 Teton County Fair’s Best in Show ribbon is on display at Knit on Pearl.

From the most populous county in the country to the least populated state, Carolyn Little has lived in several places that fed her soul in different ways.

Along the way, music, career, partnership, motherhood, skiing and knitting have been significant threads woven into the native New Jersey resident’s life.

The tall, bright-eyed blonde grew up in the New York City metro area in the early 1970s when school desegregation put her on a series of buses “hither and yon” to balance school populations. Her bussing ended when Little entered high school, allowing her to stay in her hometown of Montclair, New Jersey, in a 2,000-student school.

It was a place where performing arts were endemic to the culture and everyone participated in the arts. Little played clarinet in the concert band, euphonium in the marching band and alto and tenor saxophone in the jazz band. Some of her friends headed to Juilliard or sang on Broadway. She also played piano and guitar, earning a bachelor of arts in music at Dickinson College.

That musical immersion was a product of her environment, Little said.

“You are where you are at the time of your life that you’re in it,” she said. “I learned to ski when I moved here. Because I moved to Jackson I’ve done a lot of things I probably would never have done.”

After “a brief foray” into grad school, Little packed up and moved to Denver with a couple of friends.

“I knew I could waitress and type, so I could pay my rent,” Little said.

It was there, while working at a television station in Denver, that she met Jim Little Jr. Soon afterward she left journalism for hospital public relations and they married before Jim began medical school.

A couple of years into his schooling they decided the perfect time to have their first child would be the summer between his third and fourth year. It didn’t work. They then needed to uproot and move to Portland, Oregon, where Jim did a medical residency.

Although she didn’t want to go, Little loved Portland. “It was a gentle, accessible, interesting place.”

Getting a dog upon arriving in Portland “cured 95% of my maternal psychosis,” Little said. But they still tried for a family, consulting fertility experts and taking drugs to kickstart her ovaries into action. It still didn’t work.

At age 35, Little was told she was probably already in menopause and should consider adoption. Their hearts sank.

“Infertility is like a sickness where you’re not really sick,” Little said. “It’s nothing anybody else can see, but you can’t help but see every baby that crosses your path. When you decide to go to doctor, they pump you through all these chemicals that make you a raving lunatic. It was one of the hardest times of my life.”

Two years later, when they had given up hope of conceiving, Little decided to take a pregnancy test before a much-anticipated camping trip, because peeing on a stick had a way of instantly making her period appear the next day. The test was positive, and “it had nothing to do with the voodoo of fertility treatment.”

The couple stumbled into the first baby shower they had attended in more than five years and sat gobsmacked through the festivities. A few months later, when they were about to announce the pregnancy, terrorists struck the Twin Towers in New York, putting a damper on their joyous time. They gave Zack the middle name Kayin, an African name that means long-hoped-for child.

About two years after Zack was born, Jim’s younger sister came to visit and took Little to a yarn shop.

“I pictured a bunch of old ladies knitting red, white and blue acrylic in a circle,” Little said. “It was not what I thought it’d be.”

When she picked up the needles, Little found her bliss in an uncertain, post-9/11 world of fear and negativity.

“I always describe knitting as like yoga,” Little said. “Knitting is portable zen.”

Little accepted a part-time job in a Portland yarn store and a handful of years later, upon moving to Jackson, started working at Knit on Pearl while Jim, a family practitioner, followed in the footsteps of his father, a pediatrician.

Now she greets customers three days per week at the yarn shop on the corner of Gill and Glenwood.

She’s an evangelist for her “four-season sport,” volunteering to teach a knitting club at Jackson Hole Middle School and Jackson Hole High School.

It helps that knitters are generally happy people. Yarn is a balm for society’s ills.

“Everybody who walks in the store, with rare exception, they go ‘ahh,’” Little said. “They know they can leave whatever is vexing them behind for a little while.”

Coworker Robbi Farrow praises Little’s ability to stay patient and calm when people compete for her attention in the store.

“She has a good sense of who she is and what she needs,” Farrow said. “Saying ‘I can’t do that right now’ is a hard thing for most people to do.”

And Little might be a bit addicted to knitting. It’s therapeutic. It’s a moving meditation that leads to a tangible finished product. She knits samples for the store, gifts for friends and family and is always dreaming up what to knit next.

“Sometimes knitting gets people through a hard time,” Little said. “For people like me it becomes something you do all the time. It takes a moment to learn, a lifetime to master.”

When she isn’t knitting, Little hikes, skis and tries to find balance for her family of extreme adventurers. Although she misses some of the opportunities of a large city, Little is enamored with the sense of community she and her family have found in their dozen years in Jackson.

“This town rallies around people who are hurting like no place I’ve seen,” Little said. “Because it’s a small place you know people going through the hard stuff and the great stuff and everything in between.”

During the recent holiday season, Little was still grieving the loss of her mother and, in some ways, mourning the retreat of her father’s mind into dementia, when a fellow knitter who works at Legacy Lodge at Jackson Hole dropped off an envelope on her doorstep.

It was photographs of her parents, happy and together, from five years ago when they first moved into the assisted living center south of town.

“It was the best Christmas present I got,” Little said, being wrapped in the warmth of a fellow knitter’s thoughts. “It was so amazing.”

Thanks Johanna for a lovely profile on my awesome wife!!