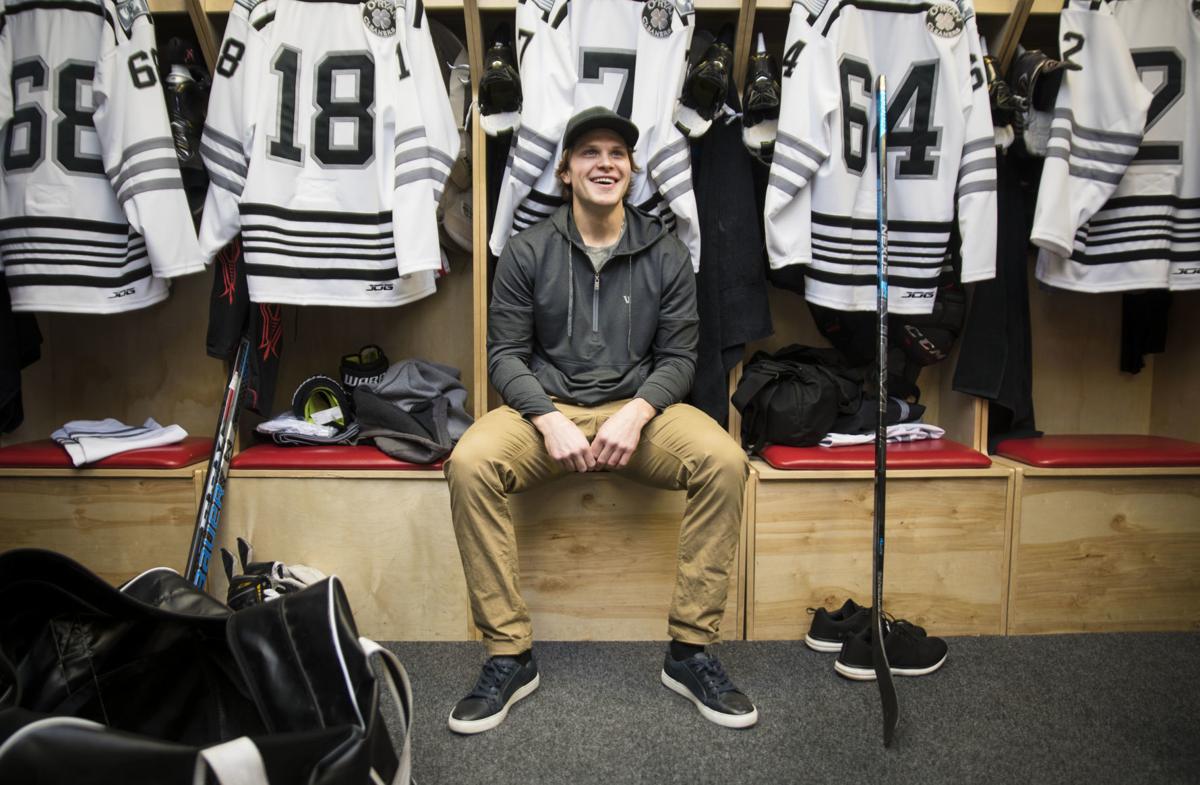 Drew Akins, originally from Excelsior, Minnesota, has been a forward with Jackson Hole Moose Hockey for four seasons. Akins is also the director of player development for Jackson Youth Hockey. 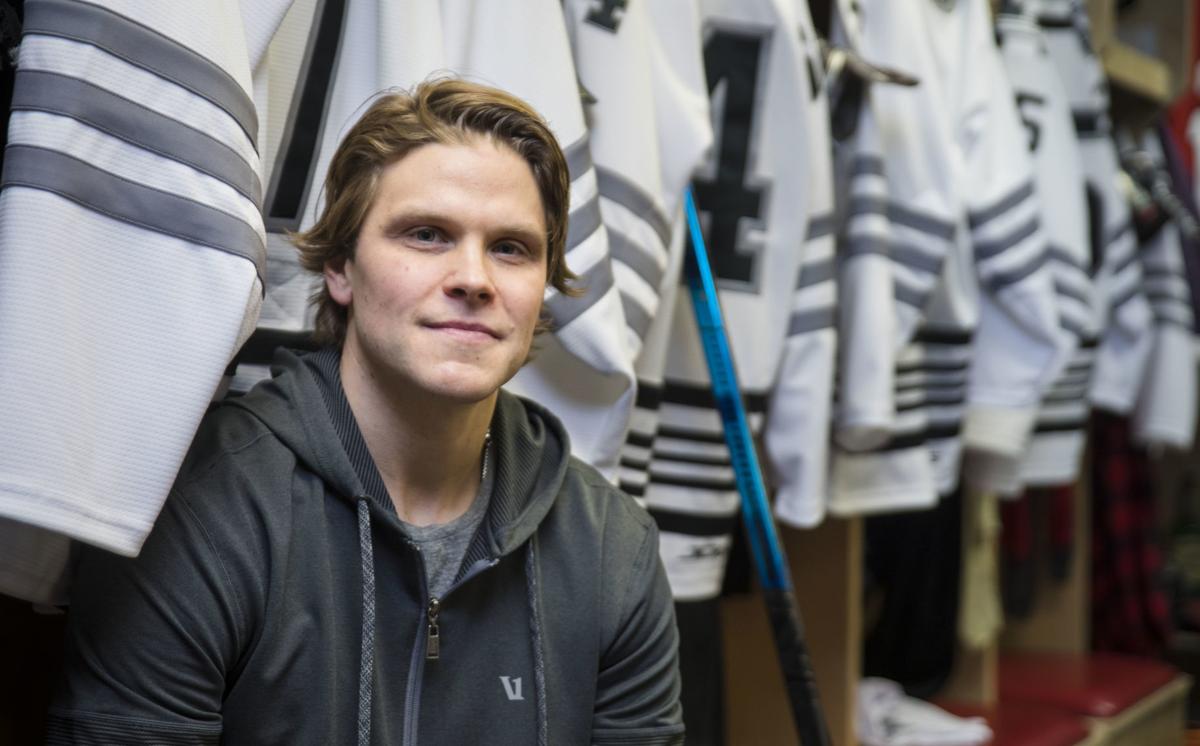 Drew Akins, originally from Excelsior, Minn., has been a forward with Jackson Hole Moose Hockey for four seasons. Akins is also the director of player development for Jackson Youth Hockey. 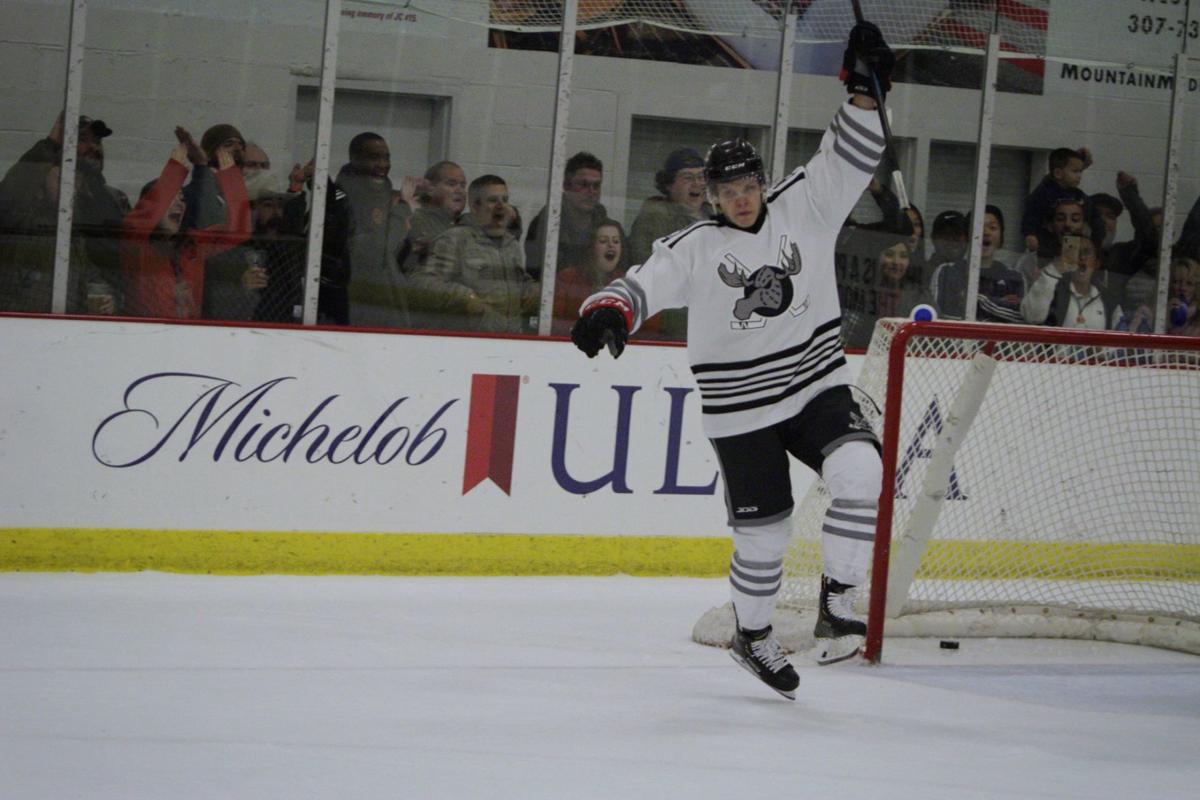 Drew Akins, originally from Excelsior, Minnesota, has been a forward with Jackson Hole Moose Hockey for four seasons. Akins is also the director of player development for Jackson Youth Hockey.

Drew Akins, originally from Excelsior, Minn., has been a forward with Jackson Hole Moose Hockey for four seasons. Akins is also the director of player development for Jackson Youth Hockey.

After the Jackson Hole Moose hockey team capped its home-opener Friday night with an overtime goal, the team had just a few moments to themselves in the locker room before their most ardent fans flooded in.

The most obvious player to be hounded was forward Drew Akins, the hero Friday night, slotting home the game-winner less than a minute into overtime against visiting rival Park City.

Add in his reputation with the young hockey players who don Moose hockey jerseys and have visions of themselves one day sinking a game winner at Snow King Sports and Events Center themselves. Because on top of being one of the more decorated players on the Moose roster, he’s also tasked with developing those young players with his day job as the Jackson Hole Youth Hockey player development director.

And that’s no surprise to the man who brought him to Jackson four years ago.

“He got ingrained in the community pretty quickly,” Moose coach Bob Carruth said. “He’s got a very contagious personality.”

After a high school and junior hockey stint that launched a NCAA Division I career at University of Minnesota-Duluth, Akins wasn’t ready to hang up the skates for good after he graduated in 2010. He bounced around minor leagues in the United States for five years, hoping it would one day launch him to a National Hockey League contract.

After suiting up for seven ECHL and CHL teams between 2010 and 2013, Akins chose to take his talents across the Atlantic. He landed in Poland, where he appeared in 27 games for Polonia Bytom in the 2013-14 season.

There were challenges in competing on foreign soil, naturally. The hockey culture he grew up around in Minnesota and found fleetingly in leagues around the U.S. wasn’t the same in Poland, with touches of the European soccer-style hooliganism from supporters and flares set off in the stands. There was also the language barrier, with Akins the only native English-speaking player on the roster.

“I think the hardest part was in between periods when the coach would address the team, he spoke Slovakian,” Akins said. “Basically afterwards the other players would have to translate what he said to me.”

But on the ice, the language gap was made up for with nonverbal cues and instinct for the game.

“You just get a feel for what your teammates play like and you kind of point and use your hands,” he said. “Not everything in hockey has to be verbal.”

Akins returned stateside in 2014, playing in both Pensacola, Florida, and Huntsville, Alabama. He played a nine-game stint for the Melbourne Mustangs in Australia, but that final year forced Akins to come to grips with the fact that a NHL call wasn’t coming. Pushing 30, it seemed as though he’d have to leave behind a life of pushing pucks.

With the professional career behind him, he headed back home to Minnesota. Instead of suiting up for games with shoulder pads and a helmet, he suited up for job interviews with a suit.

But Carruth, a Minnesota native himself and family friend of Akins, reached out and asked if he might like to skate for the Moose. He talked him into interviewing for the youth hockey director position.

“I basically had to decide if I wanted to take a job in Minneapolis that was non-hockey related, or take a chance and move out to Jackson for a year,” he said. “It was honestly a big pay cut from what I was hoping to make in Minnesota, and then there was also the sacrifice of just packing up your whole life and moving.”

But he took the job, and that year turned into four and counting. He has since limited his responsibilities with the youth hockey program purely to player development, meaning he avoids the administrative side and is able to focus only on building up the young players in a town that is still trying to figure out where hockey fits into its deep well of sports culture.

“Obviously in a ski town, we don’t see ourselves as competing with the skiers,” he said. “But at the same time, in a town of this size, we have 300 kids in youth hockey. So when you look at the percentage of kids that are actually involved in hockey for a town this size, it’s pretty incredible.”

Couple that with his impact on the ice. Now 34 and returning healthy after a back injury last season, he’s on the front lines of building the culture in Jackson both as a skater and a coach. He’s fine-tuning Jackson’s athletes to take the mantle and push the program even farther once he really does have to hang up the skates.

Until then he’ll be on the ice, putting pucks on net himself or finding another Moose player to slot home a game winner in front of a packed crowd at Snow King.

“He’s so unselfish,” Carruth said. “I always tell the guys when you’re playing with a guy like Drew Akins expect the puck. He’s going to give it to you.”