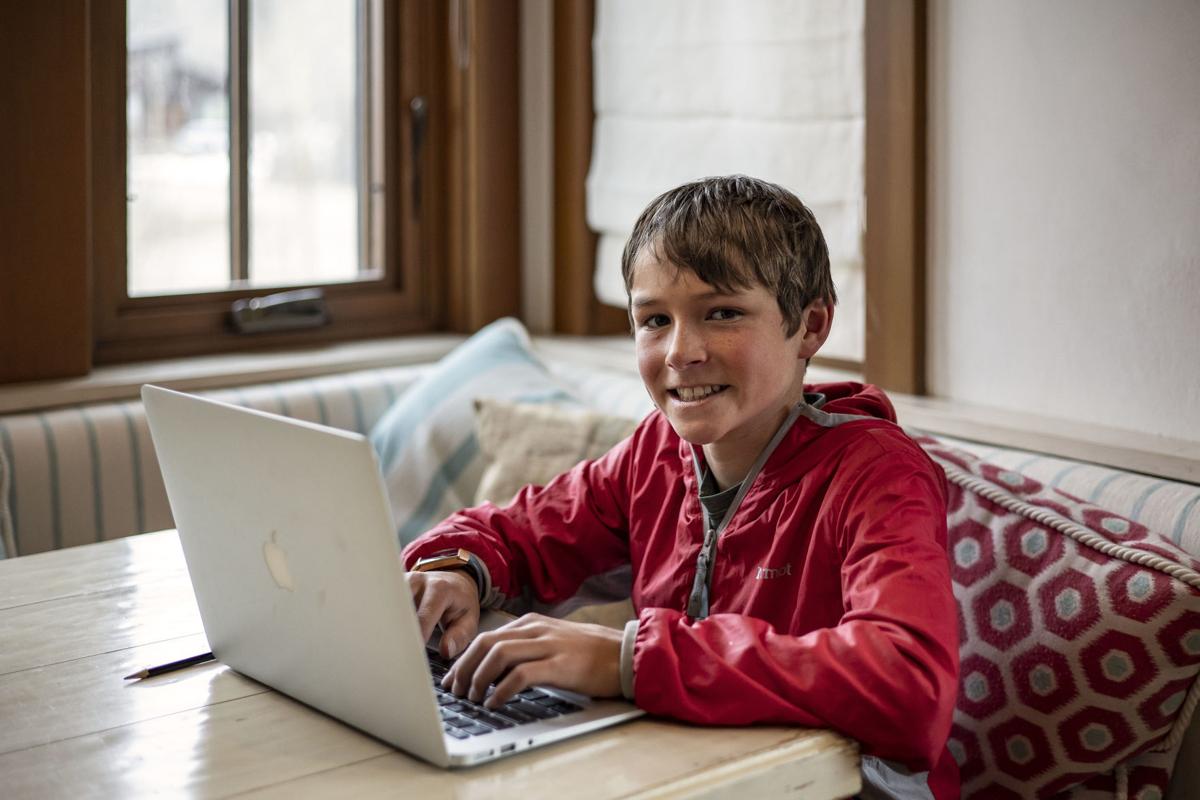 Charlie von Maur-Newcomb, 11, writes his stories for “Kelly Out Loud!” using his laptop at his kitchen table. His favorite part of the reporting process is conducting interviews and getting quotes from Kelly’s fellow residents. 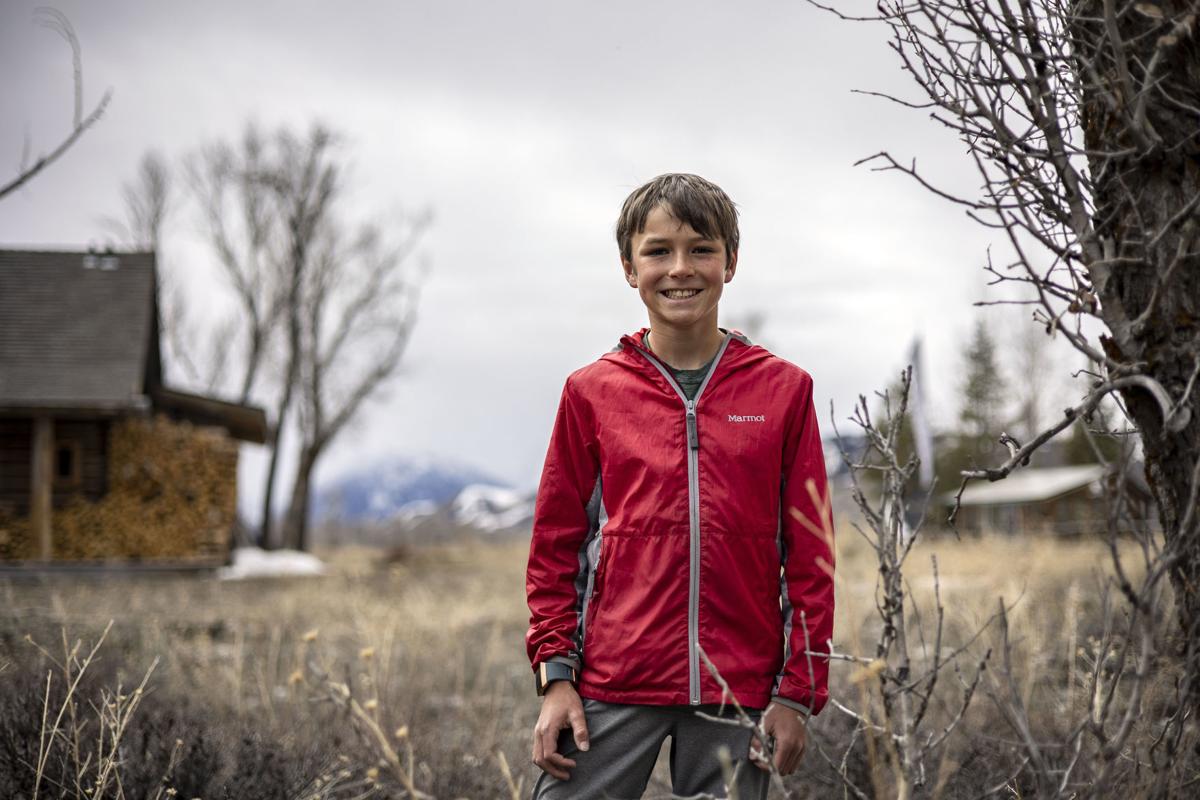 Charlie von Maur-Newcomb, 11, created a publication called “Kelly Out Loud!” in October as a way to cover his neighborhood on a hyper-local level. “I came up with the idea of wanting my voice to be heard out loud, in Kelly,” he said of his newspaper’s name.

Charlie von Maur-Newcomb, 11, writes his stories for “Kelly Out Loud!” using his laptop at his kitchen table. His favorite part of the reporting process is conducting interviews and getting quotes from Kelly’s fellow residents.

Charlie von Maur-Newcomb, 11, created a publication called “Kelly Out Loud!” in October as a way to cover his neighborhood on a hyper-local level. “I came up with the idea of wanting my voice to be heard out loud, in Kelly,” he said of his newspaper’s name.

Watch out, News&Guide, there’s a new kid in town.

Well, maybe not in town, but in the town of Kelly.

The paper is the brainchild of a certainly brainy child: Charlie von Maur-Newcomb, the son of Allison von Maur and Teton County Commissioner Mark Newcomb. He covers everything from local news in Kelly to world news about how China has “upped its game on lunar exploration” to important news obituaries and the latest in tech offerings.

Charlie has recently added another layer of sophistication to Kelly Out Loud!, soliciting letters to the editor, which will run in his weekly publication.

The newspaper undertaking — physical copies can be picked up at the Kelly post office or digital copies emailed by subscribing at charlievmn@icloud.com — is produced entirely by Charlie, with only light editing offered by his parents.

“I edit for grammatical errors and things like maybe a few redundancies, but I do not edit his voice,” von Maur said. “I think if you read a few issues, it’s clearly the voice of an 11-year-old. Maybe not every 11-year-old, but an 11-year-old.”

She and her husband are proud of the effort Charlie puts into the weekly paper’s production and say it’s something he takes very seriously.

“He gets stressed when he doesn’t get his paper out on time,” von Maur said. “There were a few weeks this winter when he was busy with his Nordic [skiing] practice and his ski group on Saturday, plus he has singing lessons on Thursdays and tennis on Tuesdays, so it was a really busy winter.

“And it was stressful for him not to get the paper out, even though it was a completely self-imposed deadline. He’s very conscientious.”

So, what drove Charlie to start publishing a newspaper in the first place? He said he was looking at the News&Guide and thinking about newspapers in general and realized “We get to tell people important information about the world and I thought that was really cool, and I wanted to do that.”

Charlie cultivates story ideas from a number of places, including listening to news on the radio while in the car with his dad.

“But also, there are a lot of families in Kelly with kids, and many of the kids are my age, so I have some articles that I put together hoping that adults will also read. But I have my entertainment section. … and that’s really more for kids,” Charlie said. “So, I think about who lives in Kelly and what they might be interested in.”

Charlie said he enjoys the writing and photography aspects equally and has been incorporating drone photos into his newspaper more often recently. Charlie mentioned that News&Guide photographer Ryan Dorgan, also a Kelly resident, has been supportive of his work.

“He said he really thinks it’s great that I’m interacting with this kind of stuff and that I’m sharing my thoughts about the world,” Charlie said.

And the support doesn’t end there. Charlie and his mother said the community in Kelly and beyond has regularly offered encouragement and have been cheerleading Charlie’s undertaking.

She thinks the timing of Charlie’s newspaper endeavor has only added to the community’s enjoyment of it.

“I think especially in this past year, when people have felt so isolated and disconnected from other people, I think it has given the people of the town of Kelly a positive feeling about community,” she said.

“People have said as much, that they think his paper is really a wonderful thing.”

Charlie says he hasn’t settled 100% on a career in journalism — he is still only 11, after all, and has numerous interests beyond reading and writing, including skiing, singing, possibly teaching or coaching, and filming — but he isn’t ruling anything out.

Newcomb, meanwhile, said he and von Maur are eager to see where Charlie’s talents take him, but aren’t pushing him toward any one area.

“I do feel pride, but at the same time I also feel some relief that he’s interested in something,” Newcomb said. “I think as a parent, one of my hopes is that the boys find a passion, and then are able to pursue that passion.

“And I think their passions will probably evolve and change quite a bit, but if he has this now as a passion and sticks with it for a little while, I think it’s a great one to have. Better than some others out there.”

“It is really exciting, as a parent, to see your child be self-motivated for anything,” she said. “It could be sports, it could be writing, it could be building something with your hands. But to see that it’s purely self-driven is really satisfying as a parent. Neither Charlie’s father or I ever had this idea, we did not put any demand on him to start it or continue it.

“It was solely his interest, and that is really a special thing, to see that inner drive coming forth.”