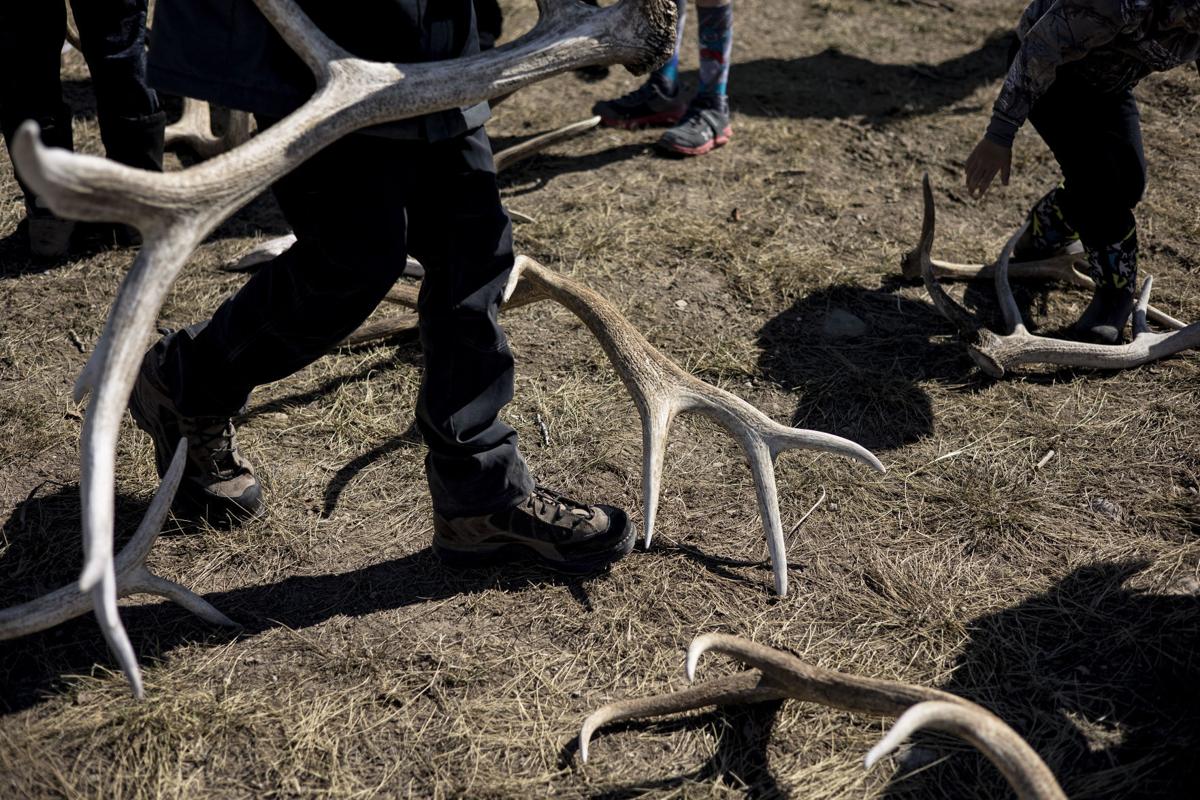 A total of 11 elk antlers were collected by Pack 1307 during the Boy Scouts antler pickup day at the National Elk Refuge on April 17. 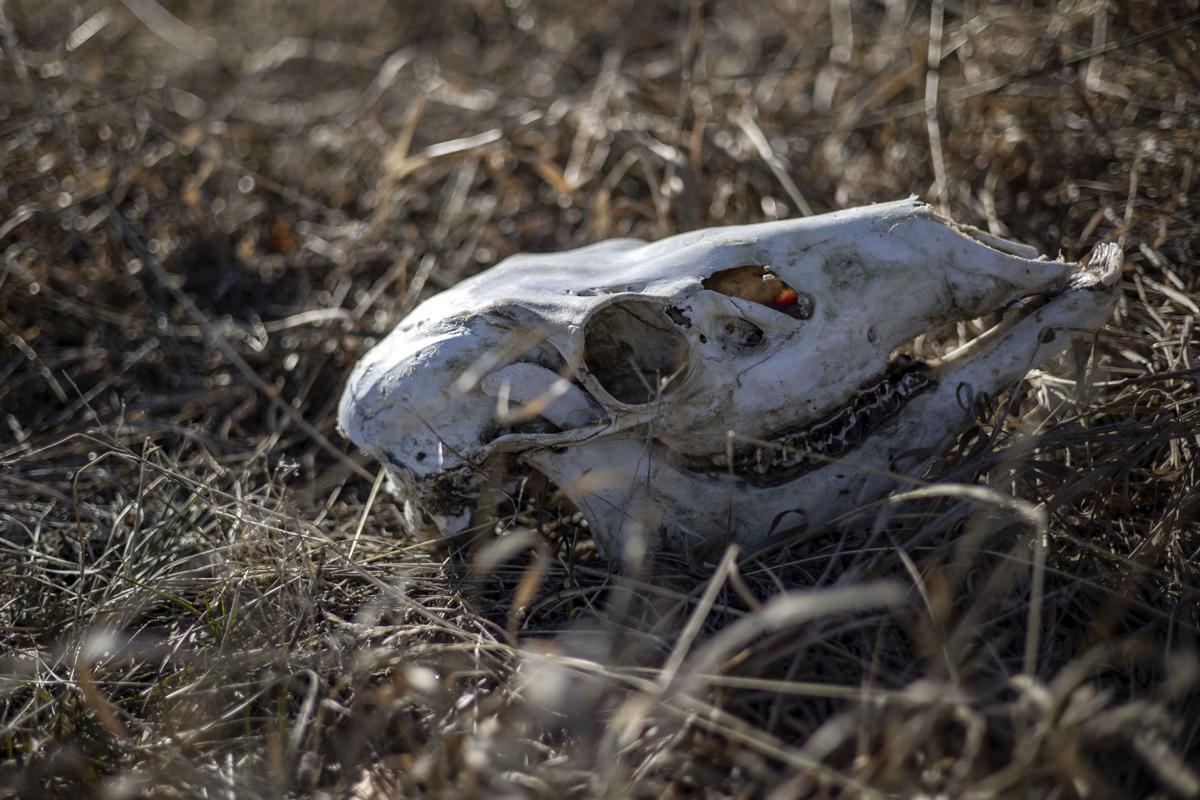 An elk skull found during the Boy Scouts antler pickup day at the National Elk Refuge on April 17. 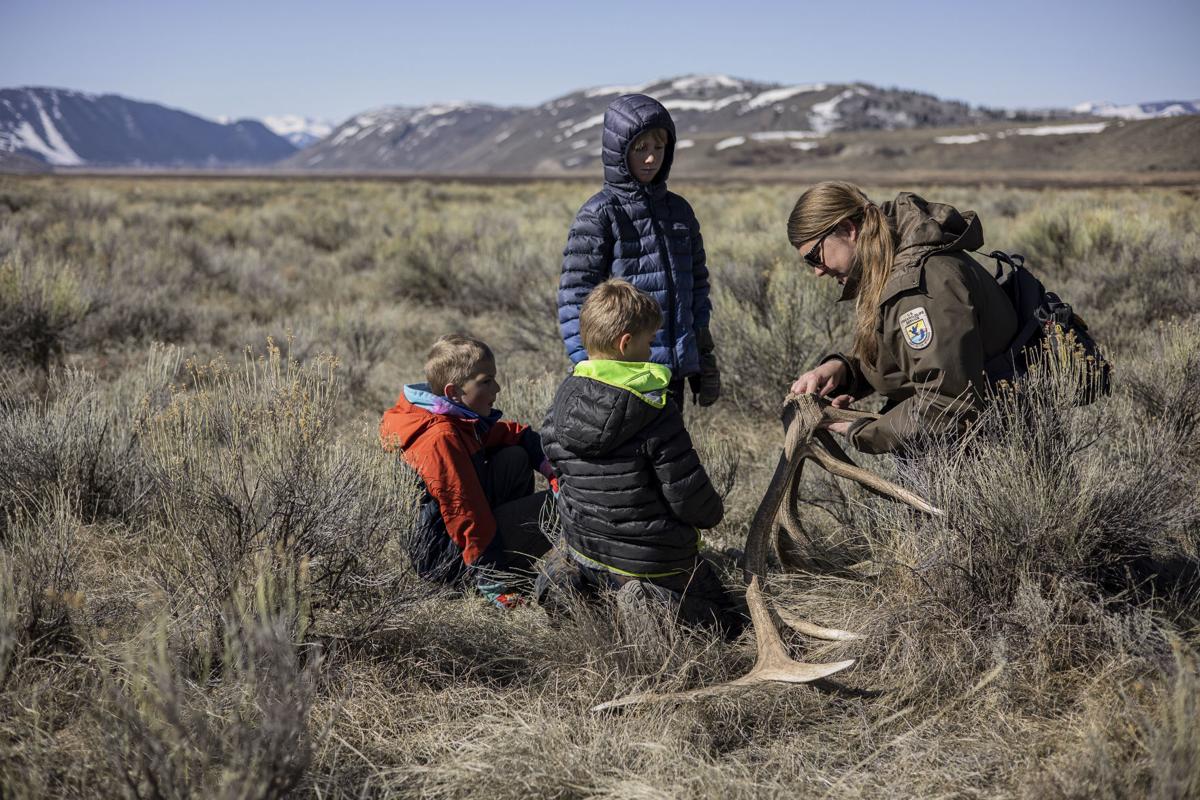 U.S. Fish and Wildlife Service volunteer coordinator Natalie Fath examines two elk antlers to see if they are a set as Henry Hyde, 8, and brothers Kalder Woolstenhulme, 9, and Dryden Woolstenhulme, 7, watch and learn during the Boy Scouts antler pickup day at the National Elk Refuge. 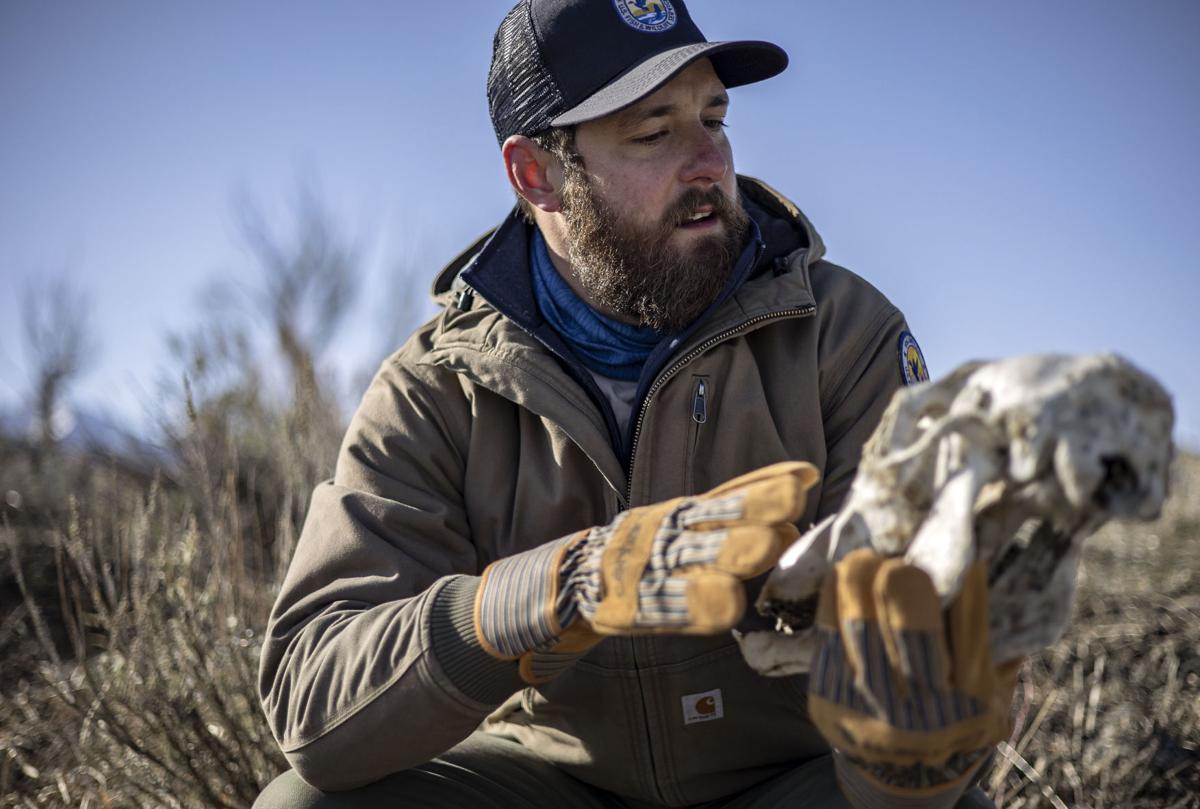 U.S. Fish and Wildlife Service naturalist Joe Lieb examines an elk skull with members of Pack 1307 as they search for elk antlers during the Boy Scouts antler pickup day at the National Elk Refuge on April 17. 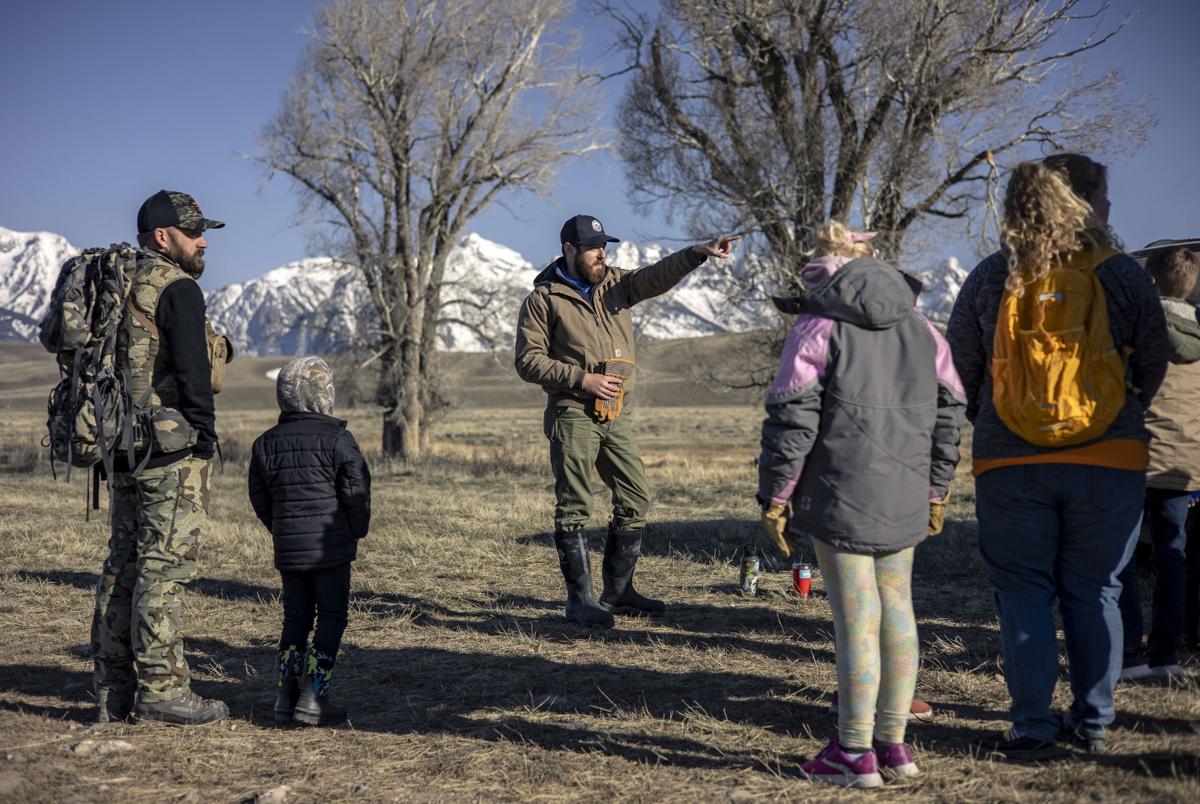 U.S. Fish and Wildlife Service naturalist Joe Lieb explains to members of Pack 1307 where they will search for elk antlers across the refuge.

Members of Pack 1307 Abbi Scherbel, 9, left, Ethan Ragain, 10, and Henry Hyde, 8, carry elk antlers April 17 during the Boy Scouts antler pickup day at the National Elk Refuge. Once a year Scouts assist in collecting the antlers, which are then sold at the annual ElkFest auction. ElkFest will be held in October this year, rather than in the spring, due to COVID-19.

“Watch out for badger holes,” said naturalist Joe Lieb on the National Elk Refuge, “and does anyone have bear spray?”

Without a cloud in the sky, the safety briefing kicked off a day of antler pickups on the refuge April 17, an annual tradition carried out by youth in the Boy Scouts of America Grand Teton Council to raise funds for the program and for refuge maintenance.

Since COVID-19 canceled last year’s collection and forced the corresponding ElkFest auction online, returning Scouts were eager to get back on the refuge this year. It was also a chance to light the spark for a new generation of conservation stewards.

This was Lieb’s first time coordinating the pickups, and it was also the first excursion for Pack 1307, made up of some of the youngest Scouts-in-training: from kindergarten to fifth grade.

Connor Olofson, 6, had to be helped up the slopes of Flat Creek by his dad, Russell, who brought along a set of binoculars to give his little one a chance.

It was sort of like an Easter egg hunt, with pods scattered across the landscape, scouring the sagebrush for recognizable tips. But more the kind of egg hunt where your conniving older siblings hide the eggs, said Cliff Kirkpatrick, Headwaters District Committee chairman.

“It’s a challenge. And as with anything in life,” Kirkpatrick said, “the greater the challenge, the greater feeling of reward and sense of accomplishment.”

Turns out there are a lot of non-antler items that look like antlers in that part of the refuge — old dried-out branches and skeletons from fallen elk, bleached white by the sun.

Connor proudly picked up one such item for closer examination: “Daddy, I love this bone. But we have to leave it here.”

The found antler sheds also can’t be kept by the Scouts. Instead, they are collected, sorted and auctioned off on Town Square for ElkFest, with 70% of proceeds going back to the refuge for irrigation and maintenance projects. This year’s auction has been pushed back to October due to COVID-19.

That doesn’t diminish the joy of finding them though. As Kirkpatrick said, “It just takes one to get you hooked. And then they’re kind of hooked for life.”

Dryden Woolstenhulme, 7, raced toward the first sighting of the day. Hoisting the shed upright he counted the tips: seven! It was nearly as tall as he is.

Moments later, his brother Kalder, 9, found one of his own. They immediately brought the sheds together to see if they were a match.

“I’m pretty sure they are,” Dryden said, but National Elk Refuge Volunteer Coordinator Natalie Fath showed the boys how to tell. Matching up the base plates, or pedicles, she explained how each one is unique, sort of like a fingerprint.

Much to the brothers’ dismay, it looked like this wasn’t a perfect match, but it was hard to tell for sure.

Those would be the only antlers found for the next two hours, despite Pack 1307 searching for miles, all the way to a cottonwood bank on the edge of the refuge.

Because this winter has been so mild, Fath said the elk may have left the refuge sooner and dropped their antlers farther into the forest. Just when the group was about to give up, Lieb spotted something in a pocket of sagebrush.

Henry Hyde sprinted out. Then Abbi took off running. Both held their catch aloft in triumph. There was also one for Ethan Ragain, 10, the largest of the day.

“It’s almost as heavy as my little brother,” Ethan said.

Abbi said she was excited now and hopeful.

As she hauled her antler back to the lot, she reflected on the recent inclusion of girls into the Scouting program. At meetings, Abbi remembers being the only girl in the room. Her older sister Emily was barred from the program despite memorizing the entire Scout Law and Oath and fulfilling all the requirements. Abbi, who can also recite the codes verbatim, is grateful the rules have changed.

“Fun isn’t just for boys; girls can have fun too,” she said.

Satisfied with the last-minute haul, the squad returned triumphantly. Pack 1307 brought in just 11 antlers in total, but nearly every member had found at least one.